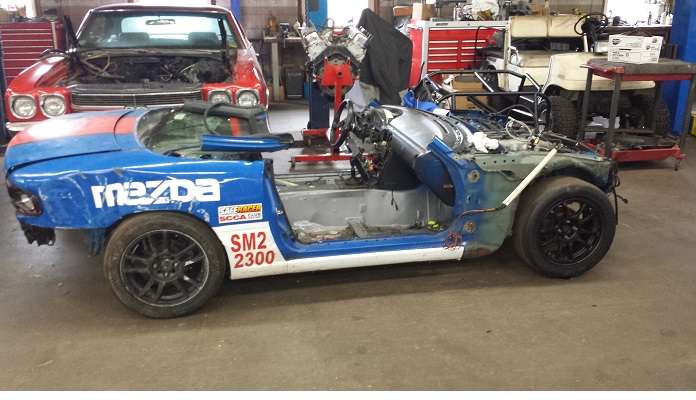 Mazda Miatas are one of the country's most popular race cars. What happens when they are too old or damaged to race anymore?
Advertisement

Mazda MX-5 Miatas are one of the most popular racing cars in America. Coast to coast, from Lime Rock in Connecticut to Mazda Raceway Laguna Seca in California, racers run Miatas almost every weekend and many weekdays as well. Sometimes new, but often used when they start their life as racers, the Miatas are reliable, durable, fast on the track, and safe relative to many other race cars.

Eventually, though, they do live out their useful lives.
Related Story: What Makes Mazda Such a Racing Success?

We found one such "fully depreciated" Mazda Miata, an NA generation, as you can tell from the image, at Mark McMullen's garage, G&M Services in Millis, Massachusetts. Mark supports a race team with technical and mechanical services from his shop and also at the track. His team has run Miatas for a decade over two generations of the car.

The Miata looked like it was in a wreck and indeed when we asked Mark what happened he summarized it succinctly, saying, "It got stuffed last weekend." This is one of two Miatas Mark's team has, so I asked him what the plan was now that it had lived out its useful life.

Mark told TorqueNews he would tear the Miata down and put away most of the running gear including the engine, engine accessory parts like the alternator, transmission, suspension parts, rear end assembly, steering components, and other reusable items to support the other car they race. In addition, the roll cage seen behind the car will be kept for a spare. Old racing Miatas don't die. They live on inside the shell of other racecars.

Toyota's First EV Will Have a Name of BZ: Toyota BZ
First Videos From Inside The Boring Company's Las Vegas Loop
END_OF_DOCUMENT_TOKEN_TO_BE_REPLACED