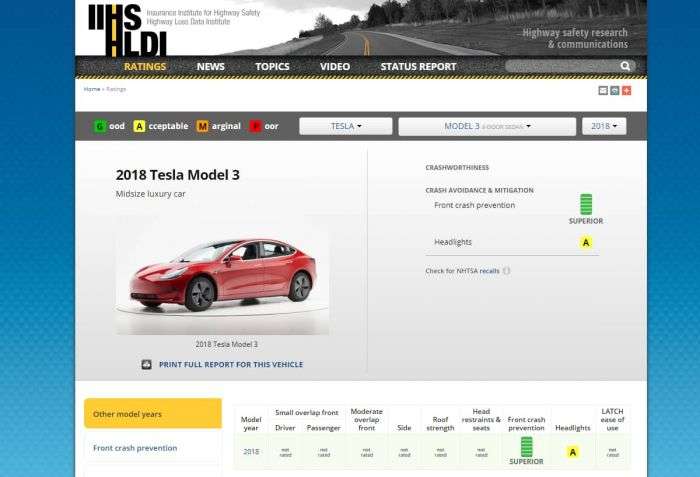 The Insurance Institute For Highway Safety has released a small part of the Tesla Model 3 safety test results. The reason the Institute can't complete the testing is unique.
Advertisement

Today we learned that the Tesla Model 3 will not earn the Insurance Institute For Highway Safety (IIHS) Top Safety Pick Plus rating. It cannot because its headlight rating was not high enough (see detailed overview). That does not mean the Tesla Model 3 is unsafe, or not safe, or not a great car. It just means it can't earn the same high safety rating that cars about half its price, like Hyundai's Elantra and Subaru's Impreza have already earned.

IIHS has the time, the resources and the interest to test the country's Top-selling electric vehicle. However, like many groups and individuals, it can't get the cars.

IIHS buys the cars it tests. The funding comes from U.S.-market insurance companies, not the taxpayers. In the case of all but Tesla, the group buys test vehicles directly from dealers and then tests them with no modifications. The tests are run on cars just like the one you might buy and drive home. IIHS ordered the Model 3 car it did non-destructive testing on almost 11 months ago directly from Tesla before the first ones had ever been delivered to any owner. Rather than carve out some early inventory for safety groups, consumer groups, and perhaps as media fleet vehicles for independent testing, Tesla instead opted to allocate the first Model 3 cars to insiders and employees. The very first one, instead of being raffled off to generate money for charity, or perhaps to be used as a museum-quality undriven car, went to Elon Musk, courtesy of one Tesla's board members who gifted it to Mr. Musk.

Because IIHS conducts the most comprehensive safety testing of U.S.-market vehicles, it requires multiple vehicles to conduct all of its crash testing. IIHS's Russ Rader Torque News that to do the full complement of testing, "We (IIHS) would need 5 vehicles – moderate overlap front, driver-side small overlap, passenger-side small overlap, side impact and roof strength."

Tesla would not sell IIHS a base model Tesla, never mind five. Because there is no "base" Model 3. As far as we can determine, the only Model 3s delivered since last July (2017) have had the added battery capacity and premium interior package. That jacks up the price significantly. Consumer Reports paid $59K for its Model 3. Tesla did, however, offer IIHS an expedited delivery for a car in February, which IIHS accepted. That car showed up in April and it was the one from which the limited test results came.

The remaining four IIHS Tesla Model 3 test vehicles IIHS requires to complete testing are still on backorder, and although terribly wasteful, will presumably be destroyed with the premium interiors and added battery capacity. When that will happen is anyone's guess. IIHS has not yet scheduled the remaining safety analysis, which consists of all of the actual crash tests.

None of these safety testing delays would have been an issue if Tesla had met its own initial promises for Model 3 deliveries. As anyone watching Tesla knows by now, production has been an ongoing problem.

View the complete data available on IIHS testing of the Model 3 thus far here. Note that if you click on the blue "Headlights" and "Front Crash Prevention" links at the bottom they will expand to show the full results.

David Jones wrote on May 16, 2018 - 8:45am Permalink
The first vehicles that seem to have ended up with company employees can more or less be considered pre production cars. I don’t think it makes sense to have these cars drive the final qualification of a vehicle as they are few and don’t represent the final product now being produced. Availability issues are demand issues, the product is highly sought after and it is groundbreaking, no other car company seems to have managed mass production of a medium range EV at this point in time. Based on the above, I don’t see the criticism in this article as particularly valid. It’s worth considering Tesla as the NASA (prior to SpaceX that is) of the car industry. Where they go, others follow but you can’t expect the metaphorical person at the front to be faster than themselves.
John Goreham wrote on May 16, 2018 - 11:05am Permalink
Thank you for your comments David. You make excellent points and help to balance out the story. At the very start of the story I included the point that the two tests done so far don't mean the Model 3 is unsafe or not not a great car. Near the close of the story, I tried to emphasize that the expectations for deliveries of the Model 3 were set not by the media, the fans, or anyone else but Elon Musk and Tesla. In 1961 JFK challenged NASA not to what was easy, but what was "Haahd.," to put a man on the Moon "by the end of the decade." NASA completed the task 17 months early.
David Jones wrote on May 17, 2018 - 5:22am Permalink
I think the initial plan for the Model 3 was 2020 and Elon Musk moved it up two years because of the massive demand (450k orders..). So in reality the fact that they are producing them atm means they are indeed 1-2 years ahead of schedule much like NASA was at the time. Also, we have to keep in mind that NASA had more or less unlimited resources at the time of Apollo. JFK gave them a goal and more or less provided them with anything they wanted which included a substantial percentage of the overall resources of a superpower. Tesla (and indeed SpaceX) are not in that position, these are not cost+ endeavours of a superpower and yet Tesla is ahead of schedule in breaking new ground. In fact, the reason for much of the negative press in my opinion is indeed that they are so far ahead. This forces everyone else in the industry to work multiple times faster to match their advancement, costing them billions in R&D that they did not expect to have to pay until sometime in the early 20s. It is easy to come to the conclusion that a well executed negative press and stock market takedown attempt targeting Tesla may be the cheaper option compared to actually delivering on the recent EV investment promises we have been hearing from the industry at large. Then there is also the oil industry interest to consider, they would have a lot to lose from the car industry moving swiftly away from ICEs. I would say that could mean trillions at risk if transition is executed 10 years in advance of oil industry expectations. Really, it would actually be surprising not to see massive amounts of negative press. I'm not saying this article was involved, I'm only saying that the situation has been intellectually perverted by major financial interests that are at risk.