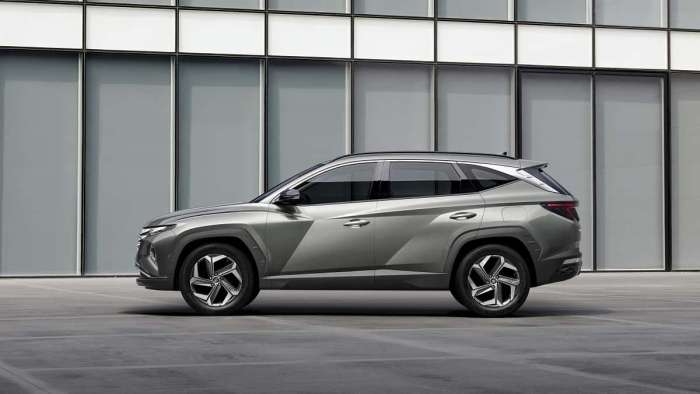 Hyundai Will Challenge Toyota's RAV4 Prime With Tucson PHEV in 2021

The all-new 2022 Hyundai Tucson will include a plug-in hybrid-electric vehicle trim. Here's what we know so far.
Advertisement

The Mitsubishi Outlander was the first modern plug-in hybrid-electric (PHEV) two-row crossover with AWD. We liked the Outlander PHEV when it debuted, but it has been overshadowed by the outstanding new 2021 Toyota RAV4 Prime PHEV. As green crossovers become all the rage, we expected others to join the mix, but Honda opted to only add a hybrid CR-V trim without a plug. To our surprise, it will be Hyundai that jumps in next.

The 2022 Hyundai Tucson has just been revealed, but we don't have all of the details yet. What we do know is that Hyundai will offer both hybrid, and plug-in hybrid trims and that there will be two wheelbases, so perhpas there will be a longer option for the PHEV.

“We are thrilled to introduce the all-new Tucson, the latest model in Hyundai’s SUV transformation,” said Thomas Schemera, Executive Vice President, Head of Product Division at Hyundai Motor Group. “This exciting vehicle sets a new benchmark for innovation in its segment, delivering an impressive blend of design, technology, packaging and performance.”

We are not sure what new benchmarks have been set by Hyundai. Toyota's new RAV4 Prime has 302 hp and a 94 MPGe fuel economy rating. It can run from 0-60 MPH in under six seconds and travel for 42 miles (which we confirmed) on battery power alone with the AC blasting. The Toyota RAV4 Prime has set the present benchmarks in the segment, and they will be tough to top.

What we do know is that Hyundai's international press release included this statement on the drivetrains: "The 1.6-liter hybrid powertrain produces an estimated 180 PS, with a combined powertrain output of 230 PS. It also produces 195 lb.-ft. of torque from the gasoline engine and 258 lb.-ft. of torque from the combined hybrid powertrain. This new powertrain uses Continuously Variable Valve Duration (CVVD) technology that manages valve opening duration for optimal power, efficiency and emissions with minimized compromise." PS units of power are equivalent to 98% of HP.

So, it seems like the Tucson is bringing a knife to a gunfight in the segment. On the other hand, torque counts more than HP, and perhaps Hyundai's new Tucson, still at least a full year away from sale in the U.S., could top the RAV4 Prime for range and efficiency. Without a battery size it is not possible to predict that.

We hope that the new Tucson resets the benchmarks just established by the Toyota RAV4 Prime this summer. In one way, it definitely will. Hyundai reports that the new Tucson crossover will have ambient mood lighting that is adjustable to 64 colors in 10 levels of brightness.