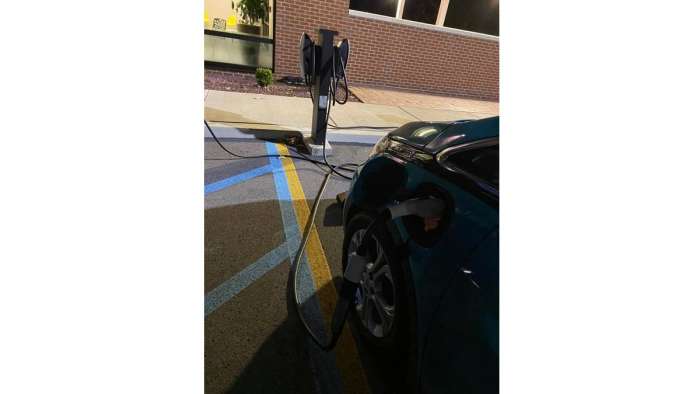 Yes, you can use a Tesla charger to charge up your non-Tesla electric vehicle. It’s simple, proven, and in no way stealing. Here’s what you need to get the job done.
Advertisement

If you own a Nissan Leaf, Toyota RAV4 Prime, Chevrolet Bolt, Ford Mustang Mach-E, Volkswagen ID.4 or any other popular model electric vehicle, you may have started to charge in public places or on the property of businesses. Some of these places where you may wish to charge your vehicle may have what is called a Tesla destination charger. This is a Level 2 charging system that is built by Tesla. However, it is not reserved exclusively for Tesla owners (unless labeled so). 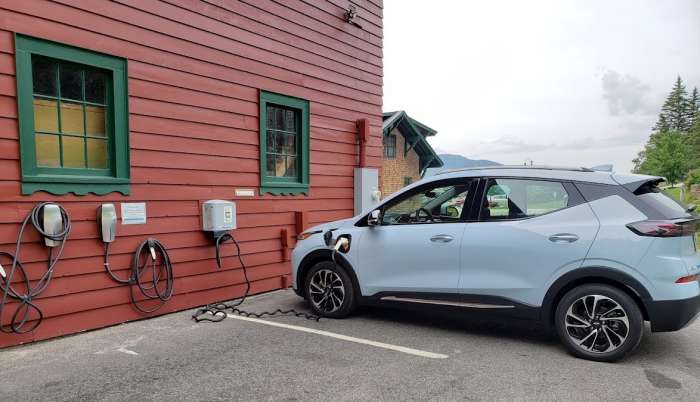 The Special Tesla Connector
Like certain electronics companies that are named after fruit, Tesla opted to use its own charger connectors when the company began building EVs. Perhaps Tesla’s design is superior to the one that every other automaker in the world opted to standardize on. We aren’t interested in the debate. We are simply pointing out to you that if you grab the handle of a Tesla destination charger and then try to stick it into the charge port of your non-Telsa vehicle it will not fit. So what now?

Get the Adapter
The simple and proven solution to this problem is to use an adapter. They are low cost, and available for purchase from online retailers like Amazon. The adapter goes between your female J Plug, officially called a J1772, and the Tesla-only male plug. It’s that easy.

How Do We Know This Works?
Having not used such an adapter ourselves, Torque News reached out to the owner of a Chevy Bolt who did source an adapter and who does use the adapter successfully. Her name is Portia Zwicker.

Here is some helpful info from Portia.
Q: Please tell us a bit about your EV.
It's a 2020 Chevy Bolt LT in oasis blue. I lease it.
Q: Have you owned other EVs or green vehicles?
2 months after this lease started, we bought another used 2017 Bolt Premier, but sadly, that one has been at the dealer for the past 4 months waiting on a part we will never get. GM has agreed to buy it back; we're waiting on the check. We intend to replace that with another EV but pickings are slim.
Q. Do you often charge in public?
Our primary place to charge is at my husband's place of work, which is a free Level 2 ChargePoint station. So that is public but limited to people with a parking pass. After that, yes, I charge in public, mostly around town, and of course at DCFCs when on longer trips. We have Level 1 charging at home if needed.
Q. You found an adapter that allows you to use a Tesla destination charger. Can you tell us where you got it, and how it works?
In mid-October, I stayed at a hotel that had only a Tesla destination charger. While I didn't need to charge while there, I used that as an opportunity to borrow a friend's adapter and just try it out. It worked perfectly. So I decided I would definitely consider getting one, but did not immediately buy. Then I saw someone in the Facebook Bolt Owners group was selling one at a discount, so I snagged that up! Good thing I did! It's simply a short piece that connects to my car at one end, and the Tesla plug at the other.
Q. Do you communicate in any way with Tesla owners who may feel some entitlement over the destination chargers?
I didn't think of entitlement here. I observed a situation where one Tesla was charging at a Tesla destination charger, and when a second Tesla arrived, they chose not to reduce the charging rate by sharing that station and instead chose the Clipper Creek.
Q. Would you like to offer any other tips you have learned about public EV charging?
Don't expect other EV drivers to be chatty, thoughtful, or even friendly (although many are). I feel a sense of camaraderie with other EV drivers, but it isn't always reciprocated. But I've also had some very nice experiences! Once I arrived at a station in use and left a note to please plug me in, and they did! They even communicated to me via Plugshare.
Our thanks to Portia Zwicker for helping offer some first-hand insights on using a Tesla adapter to charge in public.

Where Can I Get the Adapter and What Does It Cost?
The Lectron brand Tesla to J1772 adapter is a best seller on Amazon. It earns a 4.5-star rating from about 900 users. We have not tried it ourselves, so we don’t endorse it. We are simply pointing out one easy-to-use example.

A Note About Superchargers
For those who may just be starting out with an EV and learning the ins and outs of the confusing mess that is public charging, we wish to point out that a destination charger is not the same thing as a Tesla Supercharger. The Tesla Supercharger network in the U.S. is not public. It is reserved only for Tesla owners, and an adapter is not a method by which a non-Telsa vehicle owner can use it.

Our sincerest thanks to Portia Zwicker for the use of her top of page image.

LG's New EV Battery Plant Is a Welcome News for Tesla
Tesla Giga Berlin's New Hurdle: It's Not Only the Gov't, but Now Tesla Itself
END_OF_DOCUMENT_TOKEN_TO_BE_REPLACED