In a new IIHS study, four-wheel-drive vehicles prove to be safer in the real world than the same models equipped with two-wheel drive.
Advertisement

If safety is a priority for you when you shop for your next vehicle be sure to get the vehicle with all-wheel drive or four-wheel drive if it is offered. Substantial data point to the two-wheel-drive trims being less safe.

Automotive writers like to emphasize that a vehicle with all-wheel drive or four-wheel drive will not stop better in slippery road conditions. They also like to point out that for the most part, they won't turn better either. These are factual statements. Here's another fact; In the real world, all-wheel drive and four-wheel drive trims of the very same vehicle overwhelmingly have much lower driver death rates than trims with just two-wheel drive. The data point to the 4X4 and AWD trims of those same vehicles being safer. Much safer.

The latest Insurance Institue for Highway Safety (IIHS) study is one the group conducts about every three years. The Institute compiles the fatality data for each make and model for vehicles over a span of time. In this latest study, the time span is model year 2015-2017 vehicles. The group then lists out the driver death rate for each make and model. That data is also sorted by which drivetrain the model has, four-wheel drive (4X4), or two-wheel drive. To keep the language simple, IIHS calls all-wheel drive (AWD) "4-wheel drive." For example, a Nissan Juke subcompact crossover has AWD, but the group includes that trim as 4-wheel drive trim to differentiate it from the 2WD trim. While 4X4 and AWD are not the same thing, they do both power all four wheels in certain situations. 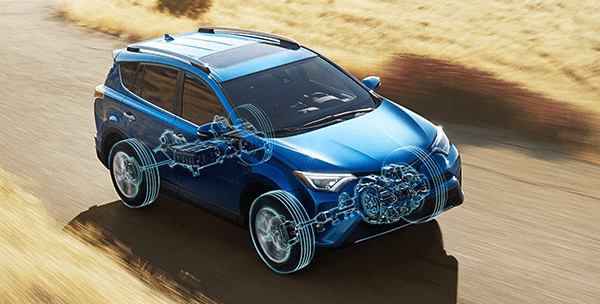 Four-Wheel-Drive and All-Wheel-Drive Are The Safer Choices
The data show that almost across the board, the trims that power all four wheels have much lower drive death rates. Let's start with the single most popular non-truck sold in America, the Toyota RAV4. This is the vehicle with the largest data set. The RAV4 AWD has a driver death rate of 10. The 2WD version of that exact same vehicle has a driver death rate of 28. Nearly triple the likelihood (however small) of being killed while driving the vehicle. Make this comparison with the Nissan Rogue or Honda CR-V, the two next-best selling vehicles in that huge segment, and the results are the same. The AWD trims have a markedly lower driver death rate.

Trucks a bit trickier to compare because they have such a broader range of configurations and not all have 4X4 offerings in the same cab styles. One that does is the very popular Chevrolet Silverado 1500 Crew Cab. When equipped with 4-wheel drive, the Silverado has a driver death rate of 26. When it is equipped with a 2WD drivetrain the death rate is 54. Double the chances of being killed while driving it just by opting for 2WD.

Now let's look at the data for some mid-sized SUVs, or crossovers. The Kia Sorento AWD has a driver death rate of 11. That same model with 2WD has a death rate of 32. Compare the Honda Pilot or Ford Explorer and the AWD version has a markedly lower death rate as well.

With cars, the comparison is harder since top-sellers like the Accord, Altima, and Camry were not offered with AWD back in 2017. One midsized four-door sedan that was offered both ways was the Ford Fusion. The Fusion AWD has a death rate of 22. The 2WD version of that same car has a death rate of 39.

Across all categories, the data tend to agree that the exact same model vehicle in a trim that powers all four wheels has a much lower driver death rate. Our simple conclusion is that all-wheel drive and four-wheel drive systems are one of the most valuable safety systems you can purchase. That is true whether you buy a family crossover, SUV, truck, or car. Powering all four wheels reduces your chances of dying while driving that car in real-world crashes.

You can view the model-specific death rate data here. The IIHS summary of this year's report is located at this link. Tell us what you think about the correlation between AWD and safety in the comments below.

John Worzalla wrote on May 30, 2020 - 3:12pm Permalink
I've always felt that AWD vehicles were safer ever since a car came over the crest of a hill in my lane on a two lane highway on a rainy night about 25 years ago. There was no shoulder and I was forced to take to a steep grassy slope on the side of the road. My AWD Subaru easily clawed its way back on the highway. Since then I have never purchased a vehicle without AWD -- now driving our 7th and 8th Subaru. Nice to have data to support the safety advantage of AWD.
Jason wrote on January 30, 2021 - 10:38am Permalink
The problem is that purchase of 2WD vehicles isn't random, and neither are fatal accidents. Fatal accidents require a certain amount of speed to happen, and are more likely to happen in good weather (you aren't to die when the roads are bad enough that you're crawling along at 20 mph). If you break down fatal accidents by state (and correct for miles traveled), you'll notice that (with a few exceptions) the states with worse winter weather have lower *fatal* accident rates than the states that get little snow...and while I don't have purchase data to confirm, I have to imagine 2WD purchases are much higher in those states that don't get worse winters. Minnesota, Wisconsin, Michigan all have death rates per 100 million vehicle miles traveled below 0.9; Florida, Louisiana, South Carolina are all above 1.4 (50% higher). So it's more complicated than this data suggests.
Erika wrote on February 14, 2021 - 6:22pm Permalink
These data don't account for economics (who is more likely to buy a 4WD car); geography; buying habits, and risk-tolerance (are more safety-conscious people buying 4WD, therefore driving more safely?) Correlation is not causation. Too many confounding variables to be meaningful.
Nick wrote on March 3, 2021 - 12:02pm Permalink
These are really strange comparisons you're making. Why death counts instead of deaths per driven hour or deaths per driven mile? Why specifically driver deaths at all, rather than at-fault collisions resulting in a death (of anyone)? Because you have to massage the data to make AWD look safer.
John Goreham wrote on March 4, 2021 - 8:15am Permalink
Thanks for your feedback, Nick. We can answer two of your questions. Deaths are used as the metric because in America every vehicle-related death results in a comprehensive police investigation and report that is sent to NHTSA. Collisions are not always recorded, in fact most are not, so the data set would be incomplete. A death of anyone would include pedestrians and it is hard to pin a pedestrian death on a powertrain. Driver deaths specifically are looked at because NHTSA, IIHS, and HDLI conclude every vehicle crash involves a driver, but not every fatal crash involves a passenger. It is the decision that the safety agencies made regarding such reporting, so we can only work with the data available. Be well.
Keith wrote on December 18, 2021 - 10:38pm Permalink
To say AWD is safer Is misleading and dangerous if not understood. Your article acknowledges the AWD does not help you brake better or turn better but unfortunately the majority of people don’t realize that . The main thing AWD is better at is accelerating but that’s usually not something you need to do to avoid an accident. AWD operators unfortunately have a false sense of security because of the gripping acceleration but after that it no different than front wheel drive. SUV S also have a higher center of gravity therefore more likely to loose control and possibly flip during a evasive maneuver. In snow conditions I think it would be more accurate to say AWD is more convenient but a front wheel drive sedan with good tires will be safe And won’t give you a false sense of security because you’ll realize when you’ accelerate how slippery it is and go a little easier..

Tesla-Funded Research Reveals One of The Biggest Mysteries of EV Battery
Tesla Tesla Buyer Nets a Whopping $12,000 Discount After Asking for Reduction
END_OF_DOCUMENT_TOKEN_TO_BE_REPLACED