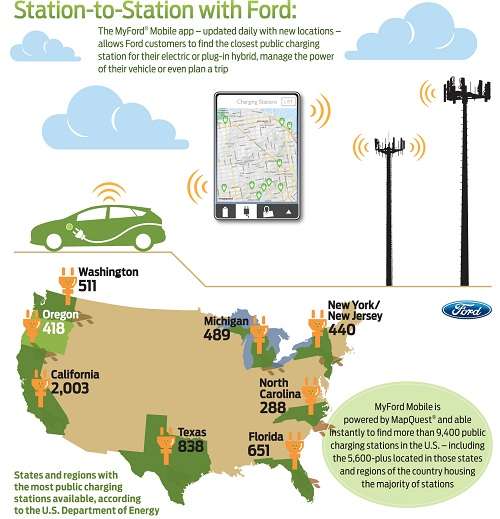 Electrification of cars is evolving so rapidly nobody can predict the future of car charging. However, Ford can help with the issue today with its newest app.
Advertisement

Are we entering a period during which the word “Charger” when referring to automobiles means a thing you plug into, rather than muscle car with a hemi? It would seem so. Things are evolving very fast in the non-gasoline drive automotive world and Ford has made the wise decision to move to an app, called the MyFord Mobile App to assist drivers in need of electrons. The app is of course available in the App Store. Making this technology reside outside the hardware of the car is smart because it can be frequently updated. Updated daily in fact.

Will Charging Stations Survive Evolution
Only time will tell if charging stations one day become the “Video-rental stores” of automotive history. By that we mean, with all of the advances tacking place so fast in the electrification of vehicles, how likely is it that people are going to need to charge their vehicle while they are out driving once this technology matures? Not very. However, in the interim period there will be those who feel the need to leave home, drive 6 miles to a Crackerbarrel and then sit in front of an omelet for 2.5 hours while their car charges. Rather than plug it in at home overnight. For those intrepid travelers, the new MyFord Mobile App is a big help.

The Ford Charging Advantage
Ford held back and waited for Nissan, Chevy, Toyota and some smaller companies to fully develop plug-in hybrids (PIH) and then partially develop electric cars for more mainstream consumers. The result of this wait and learn period for Ford is that its new C-MAX Energi PIH is by far the specification leader in its class. Able to drive further than rivals on a charge (That’s you Prius PIH), and much less expensive than other options such as the Volt and Leaf, the C-MAX Energi is a second generation car playing in a first generation arena. Able to charge on a 240 station in only 2.5 hours the C-MAX Energi can also travel about 3 times further than the Prius PIH according to Ford. The new Ford Focus Electric can charge fully in only four hours, which Ford says is about half the time of a Nissan Leaf.

More Options Coming
With the Ford Fusion plug-in hybrid in the pipeline, Ford is quickly becoming a major player in the electrified car market. If Ford meets its goal, the Ford Fusion PIH car will be the most fuel efficient mid-size car on Earth. The Ford Fusion Hybrid, coming to dealerships in about 120 days, will be able to travel 47 highway miles on one gallon of gas. That is more than Camry. This kind of mileage is starting to make some wonder why fully electric cars make sense given their special needs, added cost, and the range anxiety many feel, even with cool apps like the MyFord Mobile.

Questionable Charging Locations and Habits
Perhaps Ford and other electric car makers are expecting customers to only partially charge their cars. That might explain why in its press release Ford names such locations as Walgreens, McDonalds, Target, and other retail stores. Have you ever spent four hours at Walgreens and not been an employee? According to J.R. DeShazo, director of UCLA’s Luskin Center for Innovation, most electric car charging takes place at home. That makes sense since the power grid is cheapest to use, and has the most extra capacity at night. Charging while sleeping is the perfect plan. Charging for four hours where Big Macs and ice cream are available may not be the best thing for one’s waistline. Perhaps these public charging stations are more for show than for go.

Ford is about to become a major force in the electrification of cars. Its intelligent use of mobile apps will help bridge the gap to newer technology that will likely eliminate the need for charging stations.

Trevor wrote on July 31, 2012 - 6:47am Permalink
"However, in the interim period there will be those who feel the need to leave home, drive 6 miles to a Crackerbarrel and then sit in front of an omelet for 2.5 hours while their car charges." That makes no sense - a top up at 60 miles, sure, when you're part way through a long trip, but who leaves home with an uncharged car?