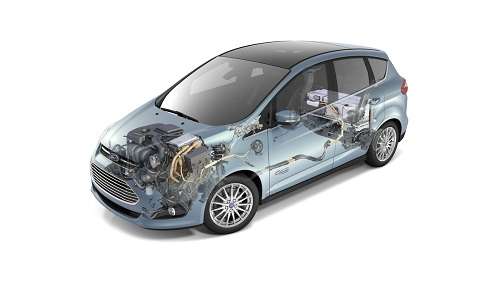 Ford claims there are 3 main advantages in moving to the new generation of lithium ion batteries. Ford also claims it has reduced its use of a costly rare-Earth magnet material in its new hybrid drives.
Advertisement

The only way that a hybrid or electric car can offer improved fuel economy is if it costs less than an equivalent gas engine car, plus the fuel and electricity used to make the cars go. If the hybrid drive or electric propulsion system costs more than the gas that would be used to propel the “standard engine” in a given car, the car is simply not more economical. It may save gas, but that is fuel efficiency, not fuel economy. Ford claims that by switching to lithium ion batteries it has improved its vehicles in 3 key was including cost to build.

Lighter Batteries Save Fuel
There is no debate that lithium ion batteries are more energy dense, and lighter per unit of energy stored than nickel metal hydride batteries, which were the type used in the first generation of Prius and Insight hybrids. By moving to lithium ion technology the battery pack can be made lighter means the vehicle is lighter and therefore saves some fuel.

Smaller Batteries Offer Space Gains
By using lithium ion batteries instead of nickel metal hydride, the overall battery space is reduced by about 30%. Ford is obsessed with space savings, as it should be. Not only is the added space better put to use in the passenger compartment, but ideally the same chassis and vehicle design can be used with the gasoline, hybrid, and also electric vehicles. The less modifications the better for economical, and commonality of parts reasons.

Do Lithium Ion Batteries Save Money
Ford is very careful in its press releases never to say that lithium ion batteries are less expensive than nickel metal hydride batteries. Instead it refers to previous generations of batteries being more expensive than this new generation. If Ford has indeed found lithium ion batteries that offer the same energy output as a nickel metal hydride battery per unit cost, it should immediately stop making cars and start making batteries. Ford may clear up this statement over time. What Ford does claim is that the use of expensive rare-Earth materials is reduced when a manufacturer moves to the newest battery technology. That is not really the same thing as saying that the overall cost is less.

Hard To Get At
As a footnote in their recent press release Ford does state that it has dramatically cut its use of an element called dysprosium in the new hybrid drive systems it manufactures. This is more a magnet related change and not really a battery related issue. Nonetheless, Ford says that it is a good thing because the material is costly. Interestingly, the name is derived from the Greek word dysprositos which translates roughly to “hard to get at.”

Ford continues its march towards domination of the non-gasoline car market. Its updates on technology deserve some scrutiny, but true breakthroughs certainly are welcome.

Nicolas Zart wrote on September 13, 2012 - 3:55pm Permalink
"If the hybrid drive or electric propulsion system costs more than the gas that would be used to propel the “standard engine” in a given car, the car is simply not more economical. It may save gas, but that is fuel efficiency, not fuel economy." Now if you look at it after 3 to 4 years, at $4.30 a gallon a hybrid is much more economical and an EV a year or so later. If you look at the price of nickel metal hydrates ten years ago and now, then compare it to most lithium chemistry, you will see lithium priced dropped a lot, thanks to laptop, cell phones and now cars. Ford is a careful car company, in a difficult economy, in the middle of a tough market trying to hedge out its bet in Detroit, of all the places. The nickel metal hydrate vs. lithium no longer valid these days. When Chevron bought the patents, it made sure it would be kept artificially expensive. Thankfully, the same never happened with lithium.
tnttom wrote on September 14, 2012 - 9:32am Permalink
I enjoyed your coments, All true, I hope that with continued research/development that the costs can continue to come down.Those who are buying hybred/electric cars now are contributing to the eventual lower costs of H/E cars.By encouraging the car makers.