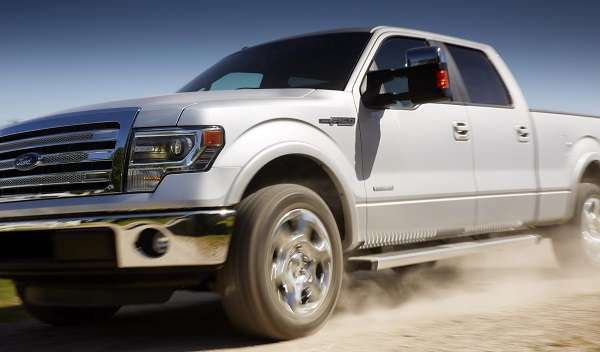 We are happy to pass along the message Ford came up with this week about how much more gasoline the F-150 EcoBoost has saved when compared to the electric Tesla. However, it seems odd that a vehicle that gets 15 MPG city is the green car Ford wants to brag about.
Advertisement

Ford would like to remind all those who care about the environment that the vehicle that is saving the most gasoline is not a Tesla Model S, but rather the Ford F-150. Specifically, the Ford F-150 with the EcoBoost engine. Before you dismiss this as crazy talk let’s take a quick look at some large numbers. Tesla likes to talk about the law of large numbers. In fact, in defense of the Model S, Tesla founder Elon Musk just this week referred to the law of large numbers in a New York Times interview while explaining away the recent troubles Tesla has had with the media over-covering the news of Model S fires.

Ford sells more F-150 trucks than any other manufacturer sells of any other nameplate. About three quarters of a million per year. Of those, fully 400,000 have been equipped with the EcoBoost V6 turbocharged engine that Ford moved to from old-style V8s. Rather than update its V8s with cylinder deactivation, direct injection, and other now common technology, Ford looked at the way the EPA estimates are created and did what most car makers are doing to make the most of the numbers. It went with turbos in a smaller motor. The result of that switch in 2011 is that 45 million gallons of gasoline has been saved. That number is accelerating. Ford’s EcoBoost truck sales are increasing. In the last two weeks Ford sold more F-150s than all the cars Tesla has ever built.

Unlike a pickup truck, the Tesla Model S is not a car that anyone actually “needs.” It is a 5 passenger super-sedan. A hybrid Toyota Avalon does the same job for less than half the price and has won Green Car of The Year Awards. A Porsche Panamera Plug-in hybrid does the job for the same price and with similar driving excitement. However, Tesla likes to pick on Audi for some reason, so let’s use that as our comparison. Had all the Tesla Model S buyers bought the gasoline powered Audi S7 (20 MPG combined) instead of the electric Tesla, approximately 12 million more gallons of fuel would have been used. Let’s set aside that the Tesla actually consumed coal, nuclear power, and Nat Gas for now. Let’s pretend all that electricity came from the sun (even though in my area the power company sends me a note each month that says the power grid has “0” percent solar contribution). By comparison to the EcoBoost’s fuel savings the Tesla’s gas savings are pretty much a drop in the bucket. A big huge cartoon bucket.

Ford’s press release hyping its trucks' green credentials also included the Prius Plug In Hybrid as another car it “out-saves.” But we won’t play. The Prius line overall has saved more fuel than all the other green car choices in America, and it is still doing that. Let’s instead pick on Ford’s EV version of its Focus to keep this company-neutral. Over the past three years we estimate Ford, the company known for Trucks and Mustangs, has built and sold about 2500 Focus EVs. Ford won’t tell us exactly how many it has sold, so we will use the recall number of 2500 recently published. The recall covered all model years of the vehicle’s production. Add in the about 160,000 gallons of fuel that Ford's EV saved since inception (versus a 35 MPG car driven 20K miles) and again, the Ford truck is still saving waaay more gas than the electric cars, which barely sell.

The funny thing about this whole exercise is that Ford’s only real truck rival, GM, has a truck that is equivalent to the Ford EcoBoost in terms of fuel economy and it is a V8. Click here if you are skeptical. A modernized V8 with now-common features like the above mentioned cylinder deactivation and direct injection. As Elon Musk knows, large numbers are funny. And sometimes very revealing.

We like to write “man bites dog” stories like this. Our thanks to Ford for highlighting just how important saving fuel in trucks is to America and to the environment. Maybe President Obama and the head of the EPA will read this story and think, “Gee, maybe we should just mandate that fuel economy be based on passengers, rather than by body style.” Ford should keep its head down if you ask us. The Ford F-150 EcoBoost with 4WD, which is how they sell, gets 15 MPG city and 17 MPG combined.

Please let us know below what you think about Ford bragging about the green car credentials of a vehicle getting 15 MPG. Is it justified?

Chris wrote on November 15, 2013 - 1:26pm Permalink
"Hey, guys, our truck with really shitty gas mileage is slightly less shitty than the previous version so pat us on the back for how eco-conscious we are!" What I love about this story is that Musk's comments about planning to build an all-electric truck clearly hit a nerve with Ford. He goaded them into writing a press release about it which means even more (free) press for Tesla Motors! Nice job, Elon!
Aaron Turpen wrote on November 16, 2013 - 9:38am Permalink
"Hey guys, our truck with better gas mileage PER POUND OF CARGO CAPACITY is kicking the shit out of that little electric company that can't decide if it's making cars or space ships." lol
John Goreham wrote on November 15, 2013 - 1:35pm Permalink
I am SO glad you brought that up. I plan to write a story about the Tesla Electric Truck idea. Thanks for commenting and making the story better!