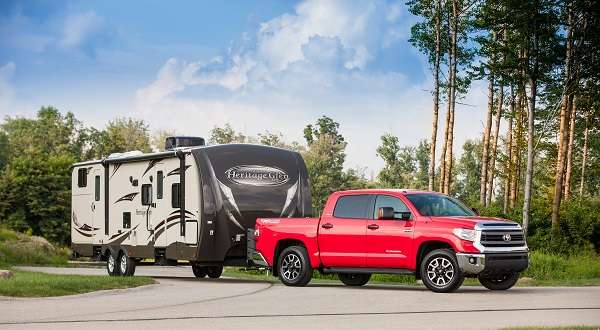 Toyota has been following the SAE towing rating standards for years. It looks like the other guys will soon follow the leader.
Advertisement

When you go to buy your new truck and you look at the horsepower and torque ratings you know that they are factual, measured, and all taken the same way as competitive models you might be considering. That is also true of fuel economy, interior space, and a long list of other important things that buyers compare while trying to decide on what pickup they wish to take home. However, for a long time now an important rating of a pickup truck, its ability to tow, has not met any common standards for testing. Buyers basically have had to take the automakers’ word for it. Except for Toyota products rated for towing, which all adhere to the applicable Society of Automotive Engineering standards. That is about to change.

The sales leader in the pickup truck world is the Ford F-150. This is partly because it comes so many ways, and partly because it is an excellent truck with a tremendously loyal, and tremendously large, following. This month multiple news outlets including Motortrend have reported that the new 2015 Ford F-150 will adopt the newest SAE towing rating standards, known as SAE J2807. Toyota is the only full size pickup truck maker in the US to follow the standard as of now. The expectation by all is that once Ford uses the standard, GM, Ram, and others will also follow suit.

What this means is that when a shopper looks at a given pickup truck series and checks the towing capability he or she will know that number is comparable to the other trucks in the marketplace. If you think that this won’t be meaningful, and that GM, Ford, and Ram are already posting numbers that will be the same after the adoption of the standard, it would seem you would be mistaken. Automotive News quoted Tom Wilkinson, who spoke on behalf of GM as saying "We already validate the trucks to [the J2807 standard]. It's just a matter of adjusting the numbers." Now, we could be off-base on this, but why would Chevy and GMC be publishing numbers that are lower than the industry standard? Therefore, it seems pretty obvious that GM at least might be adjusting its towing ratings downward.

Ford and GM pretty much ignore Toyota even though Toyota sells more trucks of the sizes it makes than GMC does. Toyota loves that, and has for a long time kept a relatively low profile in the truck market. Toyota doesn’t crow that its Tundra sales are up this year by double digits, and conversely the Chevy Silverado’s sales are down by double digits.

Having had some experience with towing Bobcats, landscaping trailers, and boats, it is seems to this author that towing ratings are in large part male enhancement supplements. At least now when the pickup truck guys compare equipment they will know how their manhood icons really measure up to Toyota. Don't be too surprised if there is a bit of shrinkage (in the numbers.)

Aaron Turpen wrote on March 12, 2014 - 1:50pm Permalink
I doubt there will be much change. Carmakers don't put arbitrary numbers on things like towing capacity without knowing what they are. Otherwise, they'd come up short and not only receive complaints, but likely get sued when equipment fails. SAE creating a standard is a good thing. Just because Toyota was first to jump on board doesn't make them better. They have less to consider (only two trucks) and less testing required to see that they meet the standard (versus half a dozen trucks in the lineup, plus commercial offerings).
John Goreham wrote on March 12, 2014 - 2:04pm Permalink
You are right, but the Chevy guy quoted sort of showed his cards I will add though that all of the vehicles Toyota rates for towing comply, such as the 4 Runner, Highlander, Sequoia, etc. Thanks for commenting.
Aaron Turpen wrote on March 12, 2014 - 2:13pm Permalink
Ya, but so does everyone else. That's my point. Toyota has far fewer to rate than does Ford, GM, or Chrysler.
Patrick Rall wrote on March 12, 2014 - 6:58pm Permalink
The problem with this is that if/when the Big 3 begin reporting their towing ratings based on these standards, it will make Toyota look ridiculous for making such a fuss if the Ram, GM and Ford trucks are still much stronger in terms of towing capacity.
Dave wrote on March 12, 2014 - 11:32pm Permalink
Tundra lost 1,100. F-150 won't lose anything. J2807 said it's for "all vehicles with model year designation 2013 or later," not that it takes effect for every 2013MY vehicle. Fusion and Escape have been on it for a couple years. F-150 is next.
Dave wrote on March 13, 2014 - 2:02pm Permalink
Speaking of misleading points from the GM Colorado article, it is like this article claiming Ford is following Tundra's towing lead and misunderstanding what J2807 is or says.
John Goreham wrote on March 13, 2014 - 3:05pm Permalink
The SAE standards were written in 2008 and firmed up in 2009. Automakers could voluntarily adopt it earlier than the 2013 target date if they had the balls. None did except Toyota, which adopted the standard in 2011. The others are now considering FOLLOWING Toyota's lead, having all missed the agreed upon deadline of the 2013 model year. Here is how Autonews put it in 2013 "The SAE's J2807 towing test standard, adopted by automakers in 2009 and scheduled to go into effect for all pickups in the 2013 model year, now is being followed in the segment only by Toyota. " - - Here is what Truckin Magazine said about it earlier this year - -"This SAE standard was supposed to be implemented for 2013 model year trucks, but when Ford opted to wait for its new F-150 before implementing the standards, Ram and GM did the same. After all, the new standards would lower the overall stated capacity for trucks, so an incentive for adoption of the standards would be the competitors’ willingness to comply as well." Here is the link from the SAE site: http://www.sae.org/works/documentHome.do?comtID=TEVTR&docID=J2807&inputPage=wIpSdOcDeTaIlS
Mike wrote on January 18, 2015 - 8:24pm Permalink
I have a 2012 f150 and it's listed at right around 9k towing, when hooked up to my 4200 trailer it can barely tow thing/ does not feel safe to tow. I hooked it to a friends tundra and the difference was huge, not only did it have more power but you had more control and security when your drivin down the road with your family