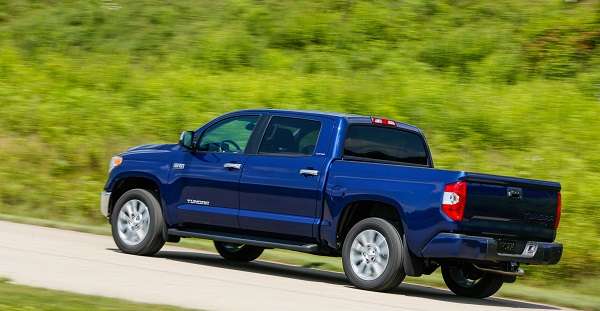 Why are 2014 Toyota Tundra sales growing so much?

Toyota's sales are down, the industry is moaning about poor sales overall, and yet the Tundra is on a multi-year sales increase curve. Why?
Advertisement

Toyota trucks have very quietly been doing great lately. Whenever we post a story saying this we get wonderful feedback from Toyota truck bashers calling them names and such. We love it. All the while Toyota’s made in the USA Tundra just keeps inching forward. Gaining market share, adding profits to Toyota’s US operations.

Toyota’s February Tundra sales were up about 8.4%. This despite Toyota’s fleet sales declining dramatically, and sales overall being down for the second straight month. One month means very little and it has been tough to sit on this story. In December of this past year (2013) Tundra was up 11.4%. January’s Tundra sales were up 12.6%. These percentage gains are all over the prior calendar year’s sales of that month. However, this is not some small 3 month trend. The Tundra was up 7.2% overall in 2013 versus 2012. The truck is on a steep slope. How would you like 10% interest on a bank account?

Overall truck sales are not necessarily up. GM’s Silverado was down 12% in February and is down a whopping 15% year to date. It isn’t due to buyers taking home the new Colorado either. According to GM’s official sales numbers in its press release GM sold 1 Colorado last month. It isn’t really out yet obviously. Maybe all those GM buyers read our very positive Colorado story and are waiting? Doubt it.

The Tacoma is down, so it could be that relatively cheap gas and a new Tundra on lots is luring buyers of Toyota trucky things away from the smallish truck. Also the Highlander, RAV 4, and 4 Runner are up, so Toyota’s decline in Tacoma sales could be an internal thing.

As we reported last fall, Toyota is only 4rth in trucks if you count the massive commercial and farming pickups that Ford and GM sell a lot of. Compare the Tundra to the types of trucks like it made by Ram, GMC and even Chevy and the Tundra’s sales are not at all small. Ford is way ahead, and with the cool new aluminum body to brag about we expect that to continue.

Why do you think Toyota’s Tundra sales are on such a steep incline? Comment below, and unless you are overly insulting, we will also approve the negative comments. Have at it.