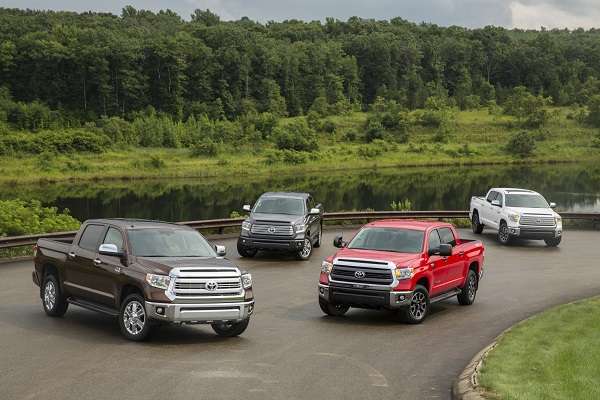 Toyota has already passed GMC in pickup truck sales. Now, very quietly, Toyota's sales are growing rapidly, while Chevy's are dropping by double digits. It may not be long before Toyota is tied for number two in all but HD pickup sales.
Advertisement

Toyota has very quietly become tied for third largest light pickup truck maker in the US. General Motors told Motortrend magazine in September that fully 25 percent of its trucks are HD (Heavy Duty) models. That means that the number of non-HD trucks sold by GMC in October was about 10, 080 trucks. If we exclude Heavy Duty models, Toyota’s Tundra model alone is dead even with the GMC Sierra. In total light trucks, including the Toyota Tundra and Tacoma, Toyota has now passed GMC by a wide margin.

Once GM, Ford, and Ram abandoned the smaller Canyon, Colorado, Ranger, and Dakota vehicles, Toyota’s overall share of light pickup trucks (3/4 ton and smaller) began steadily growing. Toyota’s Tundra and Tacoma combined sold 22,264 in October. Since GM says 25 percent of its trucks are HD, and we can assume that is also true of Ram, and since Toyota does not manufacture HD trucks, in the segments that Toyota does compete in it is behind only Ford and Chevy. If we apply the same 25% estimate to Ram, Toyota is in a statistical tie with the Ram, which has a net of 29,846 total sold. 75 percent of that number is 22,385.

For reasons only truck lovers can truly explain, GM trucks sales have significantly dropped as of late. In a month in which pretty much every company set records for sales, GM’s trucks were down in October. The GMC Sierra was down about 2%, but the Chevy Silverado dropped a whopping 11%. The Chevy is still up year over year, and healthily. However, the momentum shift is apparent. Ford and Ram are now taking share from Chevy in gulps and Toyota is taking nibbles. Toyota’s Tundra was up 18% in October. Interestingly, the Ram was up the exact same percentage. Toyota credits the sales jump in the Tundra to its new design. However, reviewers expert in things trucky say that Toyota’s new Tundra was a minor upgrade. That means that there is more to Toyota’s success in trucks than just some new sheet-metal. It should be noted that the Chevy and GMC trucks are also all new this year.

Trucks are hugely profitable vehicles for automakers and the market segment has grown in the past year significantly. Ford’s F-150, the country’s most popular nameplate, is now at a sales rate of about of ¾ of a million vehicles per year. Ford has left GM and others in the dust in terms of sales. While it is true that Ford and Chevy wildly outsell the Toyota Tundra, when combined with the smaller Tacoma, Toyota is a legitimate player in all but the largest HD commercial pickups sold in the US.

In terms of overall trucks sold Toyota is still the fourth largest pickup truck brand behind Ford, Chevy, and Ram. However, with the Tundra growing at a rate of 11 percent, and Chevy and GMC dropping by double digit percentages, it may not be long before Toyota’s larger trucks move up to parity in the pickup truck market with everyone but Ford.

Author’s note: This story was inspired by reader feedback from this prior Torque News Story in which readers expressed some disbelief that Toyota is actually a volume player in pickup trucks.

Aaron Turpen wrote on November 5, 2013 - 11:44am Permalink
Toyota has been competitive in pickups for a while. I see almost as many of them on the road around here (in true truck country) as working vehicles as I do any of the Detroit makes.
John Goreham wrote on November 5, 2013 - 11:59am Permalink
Thanks Aaron. I cannot comment in truth because I live on the coast where Asian cars do much better than the US average. I will say this, pickup trucks overall make up a huge percentage of the vehicles in this area too. And all types, luxury, economy, workhorse, junkers, monster trucks, lady-trucks (sorry Honda) and a fair number of those ginormous ones with 4 wheels in back and the tractor-trailer looking attachment in the bed to carry a multi- horse trailer.
Aaron Turpen wrote on November 5, 2013 - 12:06pm Permalink
Hey, if you're going to make fun of the Honda Ridgeline, you have to include the Cadillac Escalade cruck and Chevrolet copy of that as well. lol
Tim Esterdahl wrote on November 5, 2013 - 12:57pm Permalink
Interesting take on sales numbers. The reality is that Toyota is aiming at moving 120,000 units per year which will always be considered a "bit player" by the Big 3 fan boys. Yet, that doesn't matter to Toyota. They look at the numbers differently. They look at market share. If you compare their compact car sales numbers to their truck sales, they are at around 17 percent in both segments. That is HUGE for Toyota. Also, Toyota simply won't catch the other makers in total volume because they can't. GM and Ford both have 3 production plants, Ram has 2 and Toyota has 1 (or 1/2 for the full-size truck). Toyota would have to invest another 3-5 billion to catch up. For what? Bragging rights? Nah. They build a great truck and they are happy with that. A note on the GM truck sales drop. This is due to two reasons. First, they are having third-party supplier problems that are limiting their production. The truth is that the booming truck sales is really causing a parts crunch. Second, they are screwing with their prices which is pissing off everyone. Their pricing strategy was to set a lower price for the truck's introduction and then raise months after. That is simply a poor way to conduct business in the truck segment. Lastly, as much as critics call foul over the "all-new" Tundra, the same argument can be made on the new GM twins. They changed the interior/slightly changed exterior (same as Toyota). The only new thing they have done is introduce the EcoTec engine. Frankly, it is the same push rod technology they have had for a while just cast in aluminum (see: big deal, not really). My two cents.
John Goreham wrote on November 5, 2013 - 3:04pm Permalink
Great insight. Thanks for sharing.