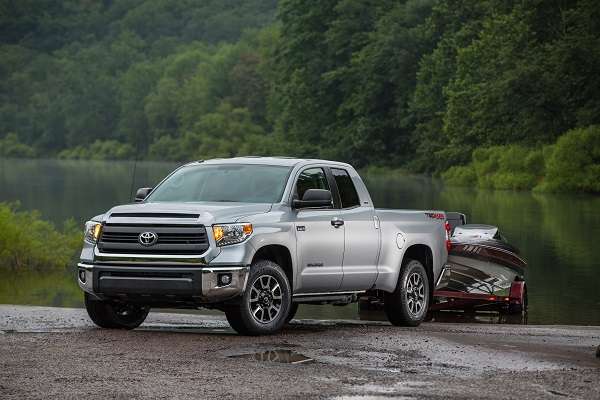 2014 Toyota Tundra asks what Ford F-150, Chevy Silverado, and Ram are afraid of

The 2014 Toyota Tundra is the only truck manufacturer to have adopted the SAE’s towing standards. What are the big boys trying to hide?
Advertisement

Many people don’t realize that with 250,000 trucks sold annually, Toyota is arguably the second or third largest light truck manufacturer in America. In combination, its Tacoma and Tundra rival any single brand except Ford when it comes to all but heavy duty truck sales. Given that leadership in the industry, maybe it isn’t so surprising then that Toyota’s trucks and SUVs are the only ones to have adopted the Society of Automotive Engineer’s (SAE) towing standard known as J2807.

The SAE towing standard has been in place for about 5 years and it details comprehensive standards for engine, transmission, cooling, axles, structural capability and more to ensure repeatable towing safety results. It was developed in partnership with the major manufacturers and it provides for standardized testing and ratings systems for all vehicles that tow. Watch any truck commercial and you will always see the big boy trucks slogging through a work-site pulling an enormous trailer loaded with logs or stone. Ford’s F-150, Chevy’s Silverado, GMC’s Sierra, and the Ram truck commercials like to brag about their capabilities, but they set their own standards, rather than adopt the automotive industry’s engineering group’s set of standard tests. What are they afraid of?

The largest trucks, known as heavy-duty pickup trucks, can all tow insane loads. That is not really in question. However, many homeowners that use their truck or SUV to tow a boat, snowmobile trailer, or camping trailer have legitimate questions about the ability of a half-ton, full size pickup truck to safely move what they need to. If they choose a 2014 Toyota Tundra they know that the towing rating is set by the automotive industry’s engineering group, rather than by the individual automaker.

Commenting on Toyota’s leading the way in adoption of the standard Mike Sweers, chief engineer of the Toyota Tundra and Tacoma said “Toyota owners look to us to develop vehicles that meet the highest safety standards, and our voluntary adoption of J2807 helps us deliver on that promise. Tundra owners can tow confidently knowing that the published tow rating has been verified by the industry’s foremost engineering authority. With Tundra, what you see is what you get.” All Toyota trucks and SUVs that have a tow rating met the SAE standards. The Tundra has met the standard since 2011 and is the only full size pickup sold in America that does so.

At the recent Texas Truck Rodeo, The Texas Auto Writers Association (TAWA) provided Toyota with its Distinguished Service Award for its leadership in adopting third-parting towing standards and certification. The TAWA group likes the Tundra for many reasons, but especially because, unlike many other trucks on the market, the Tundra is built exclusively in the United States by Texans.

Patrick Rall wrote on October 23, 2013 - 5:31pm Permalink
The SAE towing ratings are ignored by the Big 3 because they know that those ratings are no more valid than the EPA fuel economy tests and ratings. If Toyota had trucks that could pull the amount of weight that the Ram 1500, Ford F150 and Silverado 1500 could - they would be publishing those figures as well. Toyota only conforms to those standards for the sake of being able to say "we are the only company who conforms to SAE standards but the buying trends make it clear that consumers dont care about that.
John Goreham wrote on October 23, 2013 - 6:07pm Permalink
Good feedback. You're right about the trends. Trucks just seem to get bigger and bigger every year, Toyota's included. Thanks.
Jep wrote on October 23, 2013 - 10:15pm Permalink
I like the last statement in the story.....glad it is made here...but where does the money go? 95% back on foreign soil!
km wrote on October 24, 2013 - 7:07pm Permalink
And where does G.M. place it's money? in foreign soil with new factories while they close them here
David wrote on October 28, 2013 - 1:00am Permalink
You are so blind. Still bashing the profit ploy. The fact is, Toyota Tundra don't even sell much and not even a threat to any American Trucks. The factory stays open in Texas because it creates jobs in the state. Look at Ford and GM...where are there factories? Not in the states. http://www.torquenews.com/1081/despite-massive-profits-gm-pays-zero-federal-income-taxes
John Goreham wrote on October 24, 2013 - 8:14am Permalink
You might enjoy this story: http://www.torquenews.com/1081/despite-massive-profits-gm-pays-zero-federal-income-taxes
Mr. Obvious wrote on October 24, 2013 - 10:21am Permalink
John, You better get the fact checker out, Toyota is NOT even close to the big 3 in sales, even with the Taco added in, not even close. The Tundra has not been upgraded in any way in the last several years, other than this recent joke of a styling change and interior upgrade, the fact is, F150, Ram and GMC are all far better trucks than the Yoda.
John Goreham wrote on October 24, 2013 - 3:46pm Permalink
See below. I appreciate your comments.
Eric wrote on October 24, 2013 - 11:37am Permalink
Tundra is even Toyotas number 1 selling truck. Really bad info you are presenting here. Check out the monthly and annual figures for yourself.
John Goreham wrote on October 24, 2013 - 3:47pm Permalink
See link and clarification below. Thanks for your comments.
John Goreham wrote on October 24, 2013 - 4:12pm Permalink
In the above story I write that Toyota may be the number or 2 or three truck brand excluding heavy duty truck sales. According to GM 25% of its trucks are heavy duty (Motortrend 9-26-13 and other sources). That is most likely true for Ram and GMC, but the makers don't break out the monthly sales figures by exact model. So we have to estimate. That is why I say "May be..." At the bottom is a link showing all truck sales through September 2013. Light and standard duty Truck Sales through September 2013. Ford is number 1 by far #2 is Chevy with 282,295 total* (25% having been deducted as Heavy Duty) #3 is Toyota with 203,593 total #4 is Ram with 197,090 (25% having been deducted as Heavy Duty) GMC is a distant number 5. Add GMC to Chevy if you like, it does not change the outcome. So Mr. Obvious and Eric, I think what is clear is that my figures are really not that far off. Toyota simply does not make heavy duty trucks. In the remaining truck market Toyota is extremely competitive (in terms of overall sales) with all other brands except Ford, which is simply on a tear. I think I will expand this idea into a larger story and show the math, Thanks again for commenting. Here is the link to overall truck sales. http://www.goodcarbadcar.net/2013/10/usa-pickup-truck-sales-figures-september-2013-ytd.html
John wrote on October 26, 2013 - 8:04pm Permalink
I don't know why you guys always hate on a Tundra. I am a man who owns a farm and owns all 5 major truck brands, Silverado, sierra, f150, ram, and Tundra yes you can guess I make good money. There both 2012 and Ive used them all about evenly and Ill tell you there trucks, make for work. They all done their job with no problem and i like them all...their all powerful and I love them. I love my F150s and Tundras better cause they get more of my job done. Both moral of my story is stop being biased truck buyers and maybe drive a different truck for once before you judge.
John Goreham wrote on October 28, 2013 - 6:17pm Permalink
Thanks for adding your perspective John. (note: Commenter is not the same John that wrote the story)
Bob H. wrote on May 16, 2014 - 11:40pm Permalink
I am a farmer. I have owned F150s, GMCs and (sad to say) 3 Dodge 150s and 2500 V10. I only owned the dodges because my ford dealer would not give me anything for trade. He really didn't even want them but to put them on his lot for publicity purposes. Didn't care for the GMC, but it was my dad's 1st. The F150 was great. I now own a 2012 Tundra and I won' have any other brand. You Dodge boys can brag those "DAMN RAMS" up all you want, but they are only pieces of "fertilizer", if you get the hint.