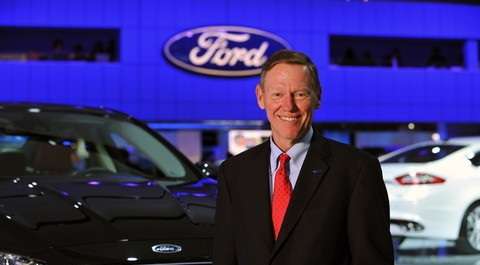 The American car company that did not get bailed out is seeing huge, taxable profits
Advertisement

In 2007 and 2007 Ford leveraged it all, betting the farm as the saying goes, and went all in. Ford even pawned its Blue Oval Logo to secure credit. It worked. Ford has reported that its third quarter, before tax, profit is a record $ 2.2 billion dollars. This marks the thirteenth consecutive quarter that Ford has been profitable. For the remainder of the year Ford is sticking with its current forecast of strong pre-tax profit, as well as positive cash flow from its automotive unit.

Ford has not reported today exactly what its quarterly tax payments were, but looking at the balance sheet provided, Ford reports pre-tax earnings through the first nine months of this year were $ 6.285 billion dollars. It also reports that after tax earnings through the first nine months were $ 4.067 billion. One could infer that means that Ford has a tax obligation of $ 2.218 billion dollars ($2,218,000,000.00). Ford also noted that its operating cash flow was positive for the 10th consecutive quarter. Ford America finished up the quarter with $24.1 billion in cash on hand, $9.9 billion more than the debt it carries. From the earnings Ford paid $600 million into its global pensions. Included in this was $500 million in discretionary payments to pensions. Ford has a plan to de-risk its pensions and this was in-line with that current plan.

Ford Europe is lagging and dragging down overall profitability. This is due in part to the hangover effect that occurred due to incentives similar to the US “Cash for Clunkers” program that Europe rode to completion earlier in the decade. Demand is down without question. Ford announced major reshuffling plans in its European operations earlier this week timed to address questions that would arise when these results were reported. Included in the plan is the closing of three facilities. It remains to be seen if those plans will work in light of union strength in the European nations. In the US Ford is adding capacity for some models such as the new Escape.

By comparison to the history outlined above, General Motors declared bankruptcy in 2008 and the publicly traded, US-based company was bailed out by the American taxpayer. Chrysler at the time a privately held company, and previously German owned, was also bailed out by the American taxpayer and the company is now controlled by Fiat, and Italian company. General Motors made headlines earlier this year when it became clear that GM is not paying tax on its profits. That story by Torque News reporter Anthony Faccenda can be found here.

Ford's many workers and its loyal customers had a lot to do with its success since the dark days of 2007and 2008, but the guy at the top who had the plan and the vision is Alan Mulally, pictured up and to the right with Blue Oval behind him.