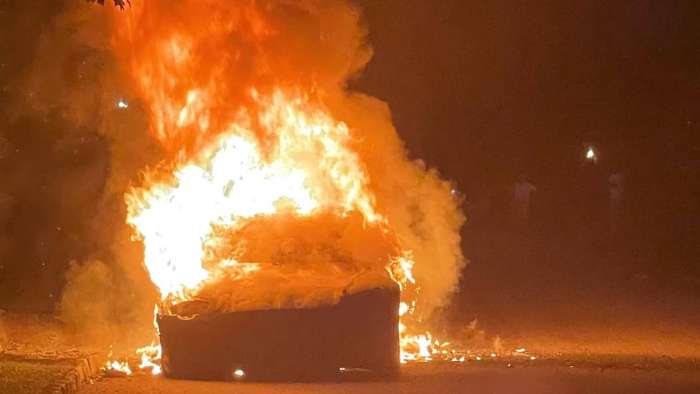 Trusted news outlets, first responders, and the vehicle's owner report that a Tesla Model S Plaid caught fire and that the doors did not function properly when the occupant tried to exit.
Advertisement

News media, first responders, and the occupant of a Tesla Model S Plaid are reporting that the just-released vehicle caught fire and that the occupant had difficulty exiting the vehicle due to the door's design. CNBC reports that the fire occurred in Haverford, Pennsylvania on June 29th. The news outlet also quoted the local chief fire officer of the Lower Merion Township Fire Department as saying that the driver was at the wheel when the fire erupted. 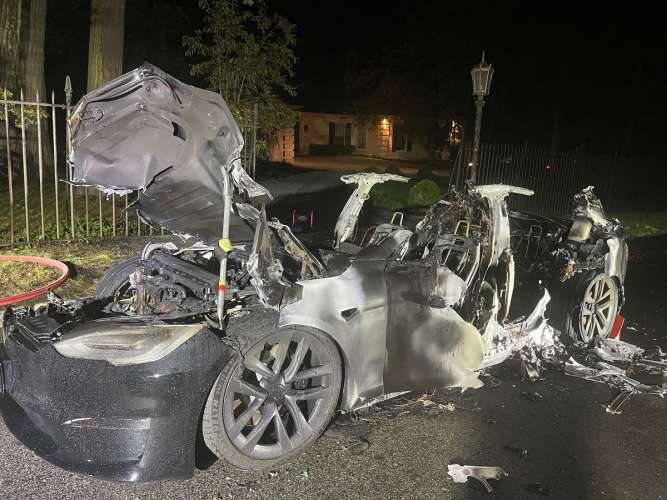 The report also adds that the driver "...had to force his way out of the vehicle, as the locks seemed to malfunction." This sounds a lot like the well-documented reports of a Tesla Model 3 that caught fire following a crash. In that Tesla fire example, people on-scene were unable to open the vehicle's doors and the occupant perished. 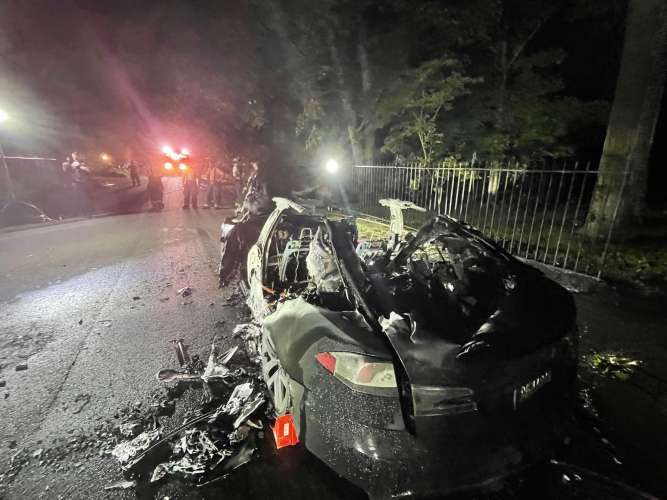 Details of this latest Tesla vehicle fire are relatively limited at this time. Other outlets reporting this event include the Washington Post, Reuters, Elektrek, and Inside EVs. Check back for more details as they become available.

The Tesla Model S Plaid trim is Tesla's latest six-figure halo vehicle, and was only just released this past month. Deliveries began at the Freemont plant three weeks ago in very limited numbers.

John Nemesh wrote on July 3, 2021 - 10:04pm Permalink
Tesla has doors with a manual (emergency) release mechanism. The driver should have been able to exit by using those...even if no power were available for the doors, that should still work. Also, it's a good idea to have a glassbreaker tool for emergencies, no matter what car you drive.
DeanMcManis wrote on July 4, 2021 - 11:22am Permalink
I knew that you would be quick to report on this single Tesla fire. And I will grant you that no vehicle should ever just catch fire, especially one that is brand new. This didn't seem to be caused by an accident. Trouble exiting could have been cause by an electrical issue due to the fire as the door is primarily opened using solenoids. I currently own two cars that have solenoid door releases, and I made sure that I understood where the manual release was right off. For the Model S it is right next to the interior door button, and clearly the sole occupant was either able to use the manual release, or the solenoid release did work, but not right away. Unless the driver panicked, which is totally possible. Regardless, he got out completely unharmed. This refreshed Model S has a revised battery pack that is slightly smaller and the 18650 batteries use a revised composition with slightly higher energy density. The pack has a revised (more efficient) heating and cooling system for this new model. Hopefully if there is a fluke in the redesign, Tesla will catch it quickly and fix the issue.
John Goreham wrote on July 5, 2021 - 11:02am Permalink
It wasn't just this publication that covered this new Tesla fire story. Everyone did. Even the Tesla advocacy publications. No commentary on my part in this one. Something seems fishy. I relied on the facts at hand to put together this one. The first flag for me was the images are being distributed by an attorney's office.
BBlue wrote on July 5, 2021 - 2:07pm Permalink
These EV fires always draw attention and are publicized as a weapon in the industrial wars between manufacturers to discourage EV sales. FACT: One rarely hears of this info from the National Insurance Institute for Highway Safety (NIIHS), i.e., for every EV fire there are 9 ICE (internal combustion engine) vehicle fires! This is actuarial data shared by insurance companies who pay for insured vehicle fires, that's most of them. New ICE vehicles also catch fire, but at 9 times the rate/100K vehicles in each category. My 2019 Tesla Model 3 costs LESS for the same insurance on my other car, a 2017 Prius Prime Plug-In Hybrid. My agent explains this is due to lower injury claims & deaths in Tesla accidents and fires than for the Prius. Yet, my Tesla with 32K miles is worth several times the value of my Prius with 103K miles!
Mark Day wrote on July 6, 2021 - 2:58pm Permalink
Another ridiculous fad: electrically operated door openers, which have resulted in the death of folks. Having backup cable openers doesn't do any good if the passenger/driver is unconscious and an emergency crew is attempting to save the occupants. More stupidity: the driver-side window should have a manual crank, for exiting in an emergency.