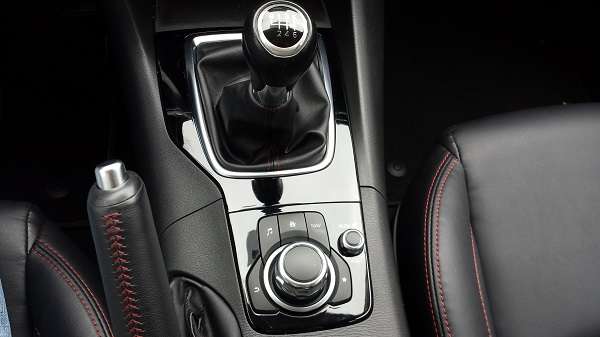 The chatter from Mazda’s dealer network is that the Mazda3 will soon be offered with the most-powerful engine and also a 6 speed manual for the new model year.
Advertisement

Torque News has now received multiple reports form Mazda dealership employees who say that Mazda will soon allow the 2015 Mazda3 to be ordered with the 6-speed manual and the larger of the two production engines, the 2.5 liter, 184 horsepower in-line four. Previously, the Mazda3 in its current generation (Model Year 2014) with a manual stick shift transmission was only available with the 2.0 liter, 155 horsepower engine. Our recent series of stories about the Mazda3, Mazda6 and Mazda cars with stick shifts has been very popular with forums, and the commentary back to us has been solid. We took the time to back-track a couple of the comments, and they are indeed from Mazda Dealer people who order vehicles. We wish to clarify that this news is NOT from Mazda’s official excellent PR network staffers. They have no comment.

Gen 3 Mazda3 Is Crazy Light
For generation three, Mazda added in serious lightness to the Mazda3. The 2015 Mazda3 hatch 2.5 will weigh in at just 2950 pounds. This third generation Mazda3 is way down in weight from the second generation (called “Gen pu” as opposed to “Gen two” by the enthusiasts). The Gen Two had a curb weight of 3300 pounds. That is a huge difference. With the new 2.5 liter, 184 horsepower engine and its 185 ft-lb of torque, the 2015 Mazda3 with the stick shift will be a blast to drive. We recently tested the Mazda3 with the smaller engine and loved it. However, more power would change the car’s personality, particularly in first and second gear.

Don’t Expect MazdaSpeed3 Performance
The new car will not have the same power to weight ratio of the Gen Two MazdaSpeed3. That car’s 2.3 liter turbocharged engine pounded out 263 HP and had 280 lb-ft of torque. So much torque that it could not put all of it to use in first and second gear with its front drive system. Still, the car could (and does) run with the Ford Focus ST, Subaru WRX, and similar affordable, fast cars. This new car with 100 ft-lbs less of torque will not need a torque limiting system and will put the power down. I just finished a week with the larger Mazda6 manual, and it would spin the tires when shifting from 1 to 2 with a speed shift (er, so I heard…). The new Mazda3 with the 2.5 engine and manual will be a very fun car, but don’t go looking to pull a Suby STI from a stoplight anytime soon unless you like the look of its rear wing.

We wish to reaffirm we are reporting chatter from dealer-related folks who reached out to us. Mazda’s public relations and product management have not officially confirmed this car. We will soon know the facts. The 2015 Mazda3 will start appearing on dealer lots in less than three months.

Jamie E wrote on July 16, 2014 - 12:59pm Permalink
100% confirmed for Canada, where the 2.5L Engine is found in the "GT" trim (our trim packages have different names and content than US cars). 2014 the GT was automatic only. We have already ordered our first 2015 manual transmission GTs. Can't speak to what will or will not be available to US customers.
Gregory Abbbott wrote on July 16, 2014 - 2:15pm Permalink
Your weight on the gen 2 is way off. I have a manual 2010 S sport hatch and it weighed 2960 lbs. with a quart tank of fuel and about 20 lbs of stuff in it. This was on certified scales at SCCA race event. Not even the Speed 3, the heaviest 3, would come up to 3300 lbs. That said, a manual 2015 2.5 would be a blast, although I doubt that it will be an faster or economical than the automatic.
Glendon Drummond wrote on July 16, 2014 - 4:29pm Permalink
I have a Canadian model mazdaspeed3, model year 2013. It weighs 3,281 pounds. He is not off on his Gen Pu weight....
Corey wrote on July 16, 2014 - 8:15pm Permalink
Who cares if it can't pull away from a Subaru...sometimes it's more than just flat out speed that matters when considering what is a great car and fun to drive.
John Goreham wrote on July 17, 2014 - 10:02am Permalink
Absolutely. Good perspective. And just for the record, this car will pull away from the XV, Impreza, Outback, Forester, Tribeca (if you can find one) and all Subys - with the exception of maybe two models. I think it will even pull a BRZ. Close.
Corey wrote on July 17, 2014 - 10:27am Permalink
Thanks and great write up. Didn't mean to come off harsh but I completely agree with you. It may pull away from those cars but the real fun comes with cornering ;)
John Goreham wrote on July 17, 2014 - 2:14pm Permalink
No worries. I knew that. I just looked up some 0-60 times. Not so sure the Mazda3 will pull a BRZ. It would be fun to try though.
Jürg Hölzle wrote on July 18, 2014 - 3:40am Permalink
I prefer the 2.2 litre Diesel on the Mazda3. This engine has a little less power than the 2.5 litre gasoline - but just twice the torque. I own a CX-5 with this engine and the acceleration is very impressive... ;-)
Maria wrote on July 19, 2014 - 11:35pm Permalink
But then it's gonna be $25,000 and higher just to get a normal engine again. A 2-liter engine is tiny. 2.4 is what it should have had all along. Now they can charge over 30k for it with options. It's just too much money for a tiny car. And reviews I read say it has lots of road noise at highway speeds. I sat in a Mazda3 with a stick yesterday, and played around with the stick, and it felt notchy, was clinking up and down. I like mine smoother. Why must it be all notchy like that? But the reason I'm looking at this car is that Nissan has nothing like it. The Juke doesn't count. Crappy, expensive 1.6 turbo that will blow up over time and cost a fortune to fix. Toyota has no hot hatch either. I'm really disappointed in Nissan.
Kenn wrote on August 2, 2014 - 1:35pm Permalink
A "hot hatch," if that's what you're looking for, would be a Focus ST (or Fiesta ST) or, for more money, a GTI. Why are you hung up on Nissan? A "notchy" shift mechanism - if not too extreme - tells you that you've positively engaged the next gear, and that it won't slip back into Neutral.
Evan wrote on August 6, 2014 - 5:02pm Permalink
Several websites now have pricing for the 2015 Mazda 3, including Autobytel. They clearly show the manual available on the S (2.5) models. Just as importantly, the official fuel economy estimates for 2015 Mazda3s are on the government's fuel economy site. The estimates for the 2.5 liter manual sedan are 4 mpg lower across the board (city/combined/highway) than the 2.0 liter with manual, and 3 mpg lower on the combined figure than the 2.5 automatic.without i-ELOOP. Like the Mazda6, they don't list an I-ELOOP version of the 2.5 manual, probably indicating i-ELOOP and perhaps the rest of the technology package aren't available on the 2.5 manuals. The estimates for the Mazda3 2.5 manual sedan are identical to those for the 2015 Mazda6 manual, though the 2.5 automatic 3 sedan is rated 2 mpg more in the combined figure than the 6 auto.
John Goreham wrote on August 6, 2014 - 5:37pm Permalink
Thanks Evan. I appreciate the heads up. The credit for this particular story should really go to our readers, particularly the brave dealership employees that gave us the heads up on this great new offering. I love that you looked at Fueleconomy.gov. I use that resource more and more. Not perfect, but very very good as a source.
John Goreham wrote on August 8, 2014 - 11:47am Permalink
Please see our updated story. Thanks again Evan for the tip.
Rocky Kimble wrote on September 4, 2014 - 2:34pm Permalink
The Mazda 3 manual is available with 2.5l engine in Sport trim for 2015. You can order now.
John Goreham wrote on December 19, 2014 - 6:15pm Permalink
Guess who is testing the Mazda3 2.5 with stick shift this week :)