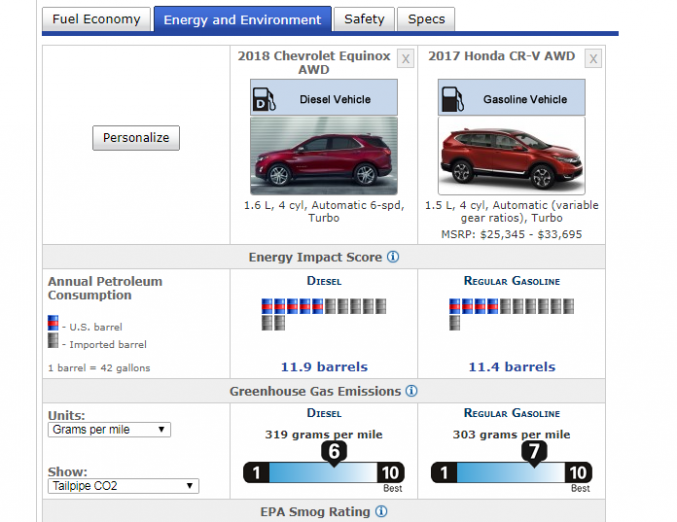 We compared America's only mainstream diesel crossover, the new 2018 Chevy Equinox 1.6D to the 2017 Honda CR-V 1.5T gasoline engine to see which is ahead in every key area.

Diesel vs Gasoline Engines Towing
Let's dispel the first and least important myth in this category, towing. Both the Chevy Equinox diesel and Honda CR-V 1.5T gasoline crossovers are rated at 1,500 pounds. There is no diesel towing advantage in this matchup.

Efficiency - Diesel vs. Gas
Look at the fuel economy listings Chevy highlights and one would think that there is an advantage to the diesel Equinox. Not so. Creating diesel requires more petroleum than creating a gallon of unleaded gasoline. On an annual basis, the Equinox diesel consumes more petroleum than does the gasoline CR-V.

CO2 Production - Diesel vs. Gasoline
Despite the diesel lobby's efforts to mislead the public, diesel fuel generates more CO2 per mile than does gasoline in modern engines. As the chart shows, the Equinox diesel generates 319 grams per mile and the CR-V just 303. The diesel Equinox also scores lower on the EPA's smog rating (in which a high score indicates a cleaner vehicle). The diesel cannot match the CR-V's smog rating. Where is the environmental advantage of diesel?

Acceleration - Diesel vs. Gasoline
We reached out to Chevrolet who informed us that the estimated 0-60 MPH time of the Equinox diesel is 10.2 seconds. That makes this vehicle one of the slowest crossovers in its class. The CR-V's time based on actual testing by MotorTrend is 7.5-seconds to sixty. We've driven the new CR-V and can report that it has excellent torque in the low RPM ranges, something that diesel vehicles have long been known for.

Cost - Diesel vs. Gasoline
The EPA estimates that based on the current average fuel costs, while diesel is at its best annual price (it goes up in winter), the AWD Equinox diesel will cost its owner $1,200 per year in fuel costs. The AWD CR-V is estimated to cost its owner $1,250 for its regular unleaded fuel per year. However, Chevy charges a $4,000 premium for its diesel engine. The first trim starts at $31,435. Honda's 1.5T is also a step up from its carry-over base engine, but starts at $26,795.

Conclusion - Diesel vs. Gasoline Engines
Like the Cruze diesel vs. Civic gas-engine matchup we did recently, the gasoline engine is better in all aspects and even matches the towing rating of the all-new diesel Chevy Cruze.The gasoline-powered crossover is dramatically faster, pollutes less, has better overall efficiency, and has a definite cost advantage. In mainstream vehicles, gasoline-powered engines beat diesel-powered in every meaningful way.

Terence wrote on August 28, 2017 - 3:17pm Permalink
Wait until the Euro CR-V with 1.6Diesel hits the market..then you can make a proper comparison. This here ist orange vs apple!
John Goreham wrote on August 28, 2017 - 7:05pm Permalink
That would be an ideal comparison. It looks like the Mazda CX-5 diesel will be the next offering. We will be sure to do a fair comparison once that one hits the market.