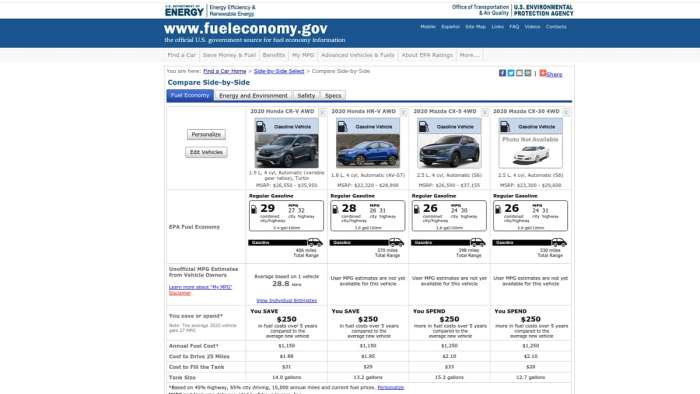 There is a tipping point on fuel savings and it happens in the RAV4 / CR-V size segment. Buying a smaller crossover won’t save you any money on fuel.
Advertisement

Torque News has had the pleasure of testing a number of outstanding small crossovers this past summer. In every case, our real-world driving returned better than EPA-estimates for fuel economy. We frequently saw mileage in 30 MPG to 35 MPG range in non-hybrid crossovers. However, we started to notice a trend. The smaller crossovers, typically the top-trims of the models we tested, didn’t return better fuel economy compared to larger crossovers the size of the Honda CR-V and Toyota RAV4. 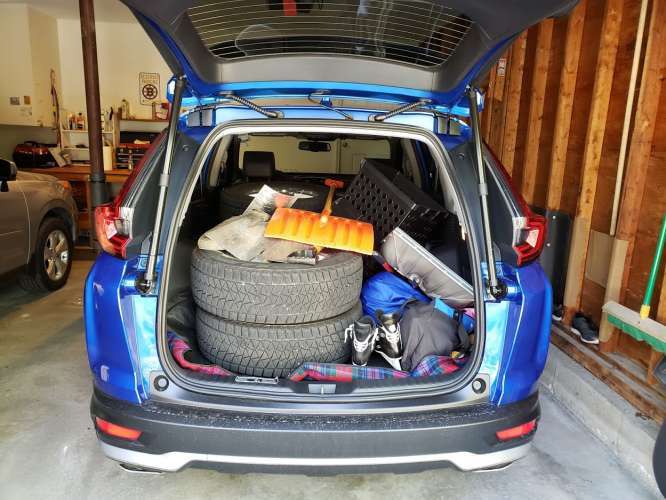 The Honda CR-V returns an EPA-estimated 29 MPG in Combined driving. In our real-world summertime driving that equates to about 30 MPG. Note that we are talking about the CR-V that is the top-seller in the Honda lineup and the top-selling family vehicle in America, the 1.5-liter turbocharged version. Not the Hybrid. The CR-V Hybrid returned 39 MPG in our testing. 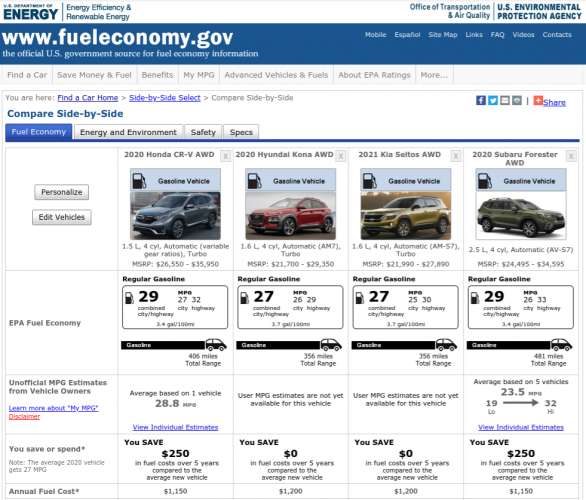 Our eyes were opened by our test of the Mazda CX-30. Though smaller by a pretty substantial margin, the CX-30 returns about the same fuel economy as the larger CX-5. Both have the same drivetrain. In our testing, both return about 32 MPG on rural back roads and highways.

To see if our impressions were valid, we then turned to the EPA’s official website for vehicle efficiency, www.FuelEconmy.gov for some facts. Unlike the old days, this EPA rating system is now very accurate in our experience and in fact, conservative. We usually see fuel economy slightly better than the EPA predicts.

We compared the Honda CR-V to its smaller sibling the HR-V. The CR-V actually has better fuel economy. We then compared the CR-V to a list of smaller models selecting the top trim if an option was available. The CR-V gives up nothing in annual fuel costs to any of them.

What we found was that popular crossovers in the segment shared with the CR-V generally have equal or in some cases, better, fuel economy than smaller crossovers. And the prices are not that far off either.

Those shoppers who are keeping a sharp eye on their budget should look closely at the CR-V-sized segment if they are shopping for a crossover. Based on our analysis, there is little to be gained by buying a smaller crossover, particularly if one is considering a well-equipped model.

One final note. The CR-V Hybrid, Toyota RAV4 Hybrid and RAV4 Prime plug-in hybrid electric-vehicle, as well as the Subaru Crosstrek Hybrid and other green choices, are now giving those who wish to conserve fuel and reduce their carbon footprint a wide list of choices in small crossovers. If front-wheel drive will do the job, there are even some affordable battery-electric crossovers like the Hyundai Kona EV and Kia Niro EV to consider. Shop wisely.

Paul Fosse wrote on August 31, 2020 - 11:46pm Permalink
Don't forget the increadibly fast and efficient Tesla Model Y and the soon to be available Ford Mustang Mach-E. They mean you don't have to choose between great fuel economy and fast acceleration and great handling, you can have both.