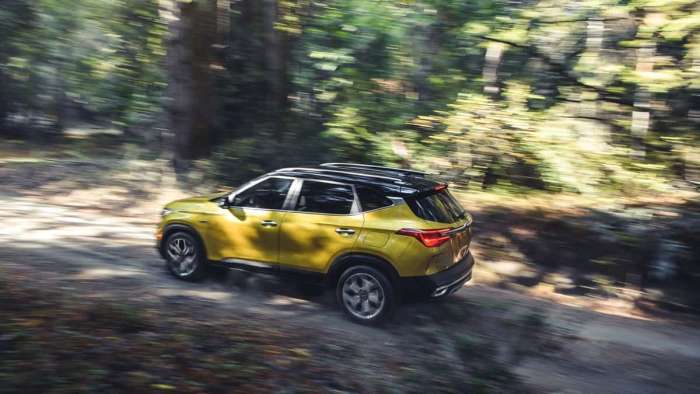 We compare and contrast the Hyundai Kona and Kia Seltos, two of the best small crossovers for 2021.
Advertisement

The Hyundai Kona and Kia Seltos are both small crossovers made by the same parent company. However, they are not as similar as you may guess. They do share many key components, and have some of the same strengths, but based on our testing of the Kona Ultimate AWD and the Seltos SX Turbo AWD, we found them to have different personalities and some important differences in key features. Note that the Hyundai Venue is smaller than the Kona and a lower-cost vehicle not comparable to the Kona and Seltos. While we liked the Venue, the Venue is not offered with AWD. 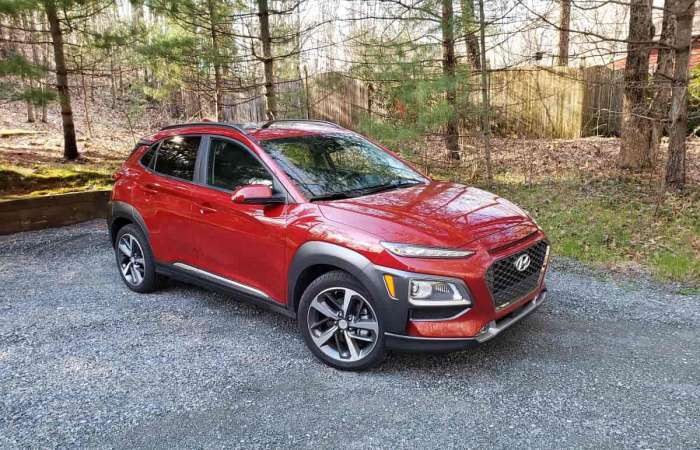 Related Story: Mazda CX-30 Premium vs. Hyundai Kona Ultimate - Which Compact Crossover Is Right For you?

We will include both objective (fact-based) and subjective (opinion-based) comparisons and contrasts in this story. Let’s start off with the cold hard facts and move to our impressions of these two outstanding vehicles. We will sprinkle in some comments about key competitors along the way. At the end, we tell which we would pick, and why. Your priorities are all that really matter so don’t let us spoil one of these two outstanding vehicles for you. 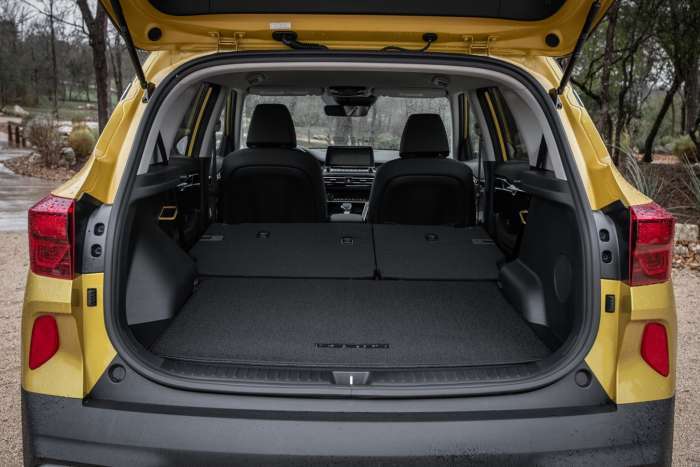 Tale of the Tape – Kia Seltos vs. Hyundai Kona
The Seltos and Kona are similarly sized. Though the Seltos has a larger cargo capacity (in yellow above), we didn’t find it to be meaningfully-larger. The Kona (In red with bike in back below) is a bit shorter, rides on a slightly shorter wheelbase, and is a bit lower. Kona also has a bit less ground clearance. Here’s the funny part: We thought the Kona was a bit larger until we checked the spec sheets! 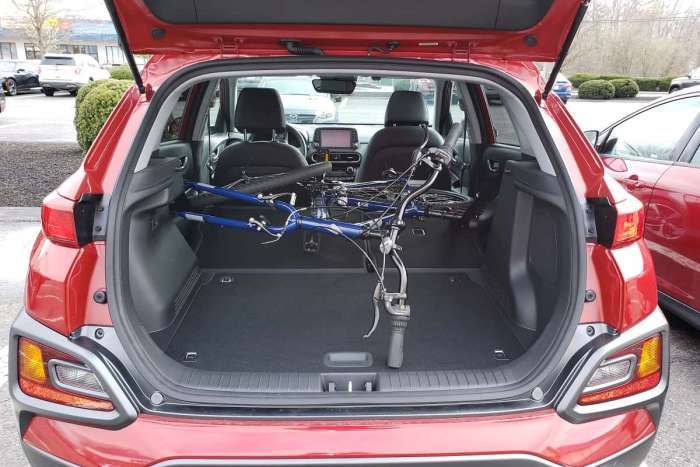 Kia Seltos vs. Hyundai Kona - Pricing
Top trims like the Kona Ultimate AWD and the Seltos SX Turbo AWD are both priced close to $30K. Our Seltos tester had a price of $29,485 including its $345 special Starbright Yellow Paint and Black roof. The Kona Ultimate AWD is priced at $30,625. Both of these prices include destination charges. The Kona is $1,200 more expensive than the Seltos in these top trims. 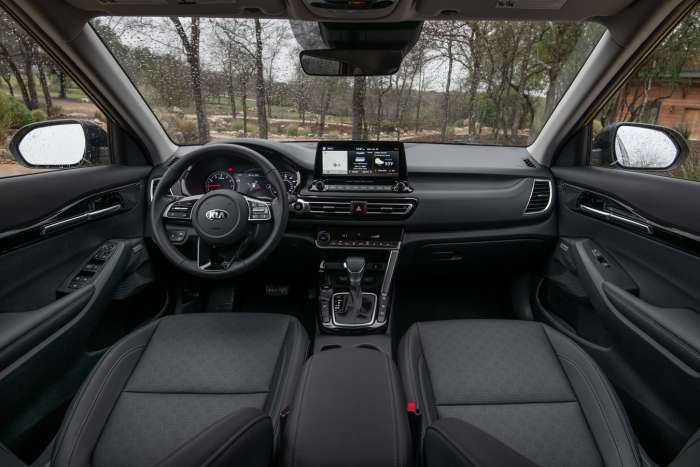 Kia Seltos SX Turbo AWD vs. Hyundai Kona Ultimate AWD- Powertrains
The Seltos and the Kona use the same powertrains. Each has a 1.6-liter turbocharged engine we love. With 175 hp, these are fun to drive vehicles. Even better, the whopping 195 lb-ft of torque peak arrives at just 1,500 RPM. That means that pulls from a stop are very satisfying – usually. 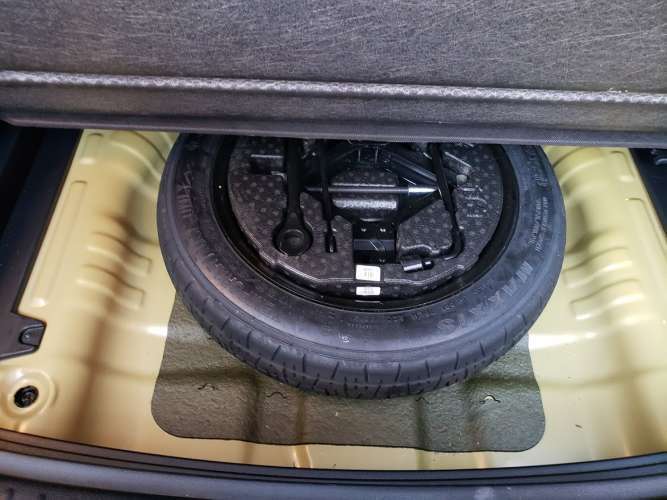 Kia Seltos vs. Hyundai Kona – Features Comparison
Let’s start at the end. Our most recent Kona Ultimate AWD test vehicle did not have a spare tire. The 2021 Seltos SX Turbo AWD we tested did. That alone would tip the balance in the direction of the Seltos for us. In New England, a destroyed tire due to road hazards is a real concern. Kona owners have reported under our stories that their Kona did come with a spare. We suggest you look before you buy. As we write this story, we are looking directly at the specifications page for the Kona and it clearly says “FWD Only” for the spare on the top three trims. By contrast, the Seltos specs show a temporary spare is included with every trim. 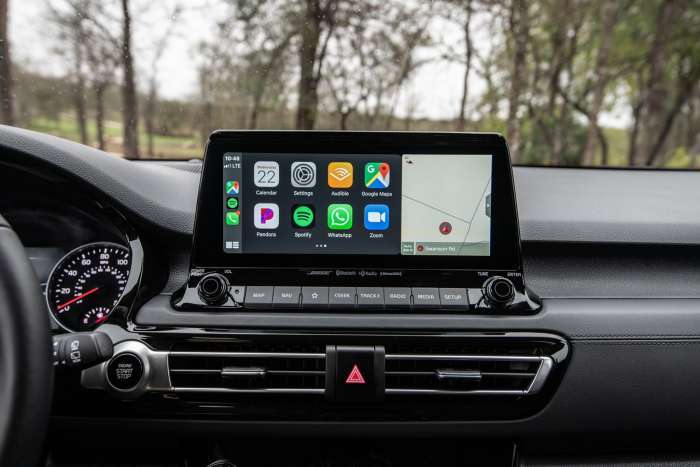 Neither the Kona nor the Seltos list an available heated steering wheel on any trim. That feature is important to us and it is available on the Mazda CX-30. Both the Kona and Seltos offer premium audio systems in their top trims and heated seats on many trims. There is no head-up display in the top-trim Seltos, but the Kona does have a HUD system. Advantage Kona. Neither model has adaptive headlights that turn into corners. Once again, that is a feature we value, and it is available on the Mazda CX-30.

Kia Seltos vs. Hyundai Kona – Driving Impressions
The great news is that both the Kia Seltos and Hyundai Kona are very fun to drive. Not in the low-slung, curve-hugging way a sedan is, but you won’t miss it (much). Instead, they have a more upright feel and you learn to point and shoot in traffic and to slow before a turn more than you would in a sedan. Meanwhile, your view of the road is better than in a small sedan, and you feel confident because of this.

On dirt roads or on logging trails you will love how these vehicles feel. We have driven both in such conditions and they shine. We took the Seltos up a steep power-line access road and it was fun scrambling for traction on the single-track narrow path. The AWD lock button is great. We love being in control of small things like that. Likewise, both of these vehicles come alive when the Sport mode is activated. 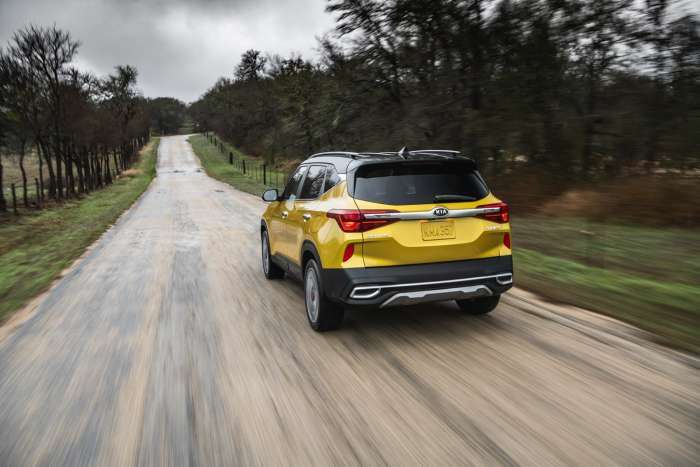 Take what we say next in context. We did not test these two back to back, but we have had a lot of time in Konas (three separate tests over multiple weeks) and drove the Seltos the day we wrote this. With that warning, we remember the Kona more fondly in terms of driving enjoyment. Our memory is that the Kona corners better and is more “car-like” than the Seltos which is a bit more “SUV-like.” Perhaps due to the Kona’s lower height and less ground clearance. That said, neither is as sporty on twisty roads as a Mazda CX-30, and neither is in the same league as a Subaru Crosstrek when it comes to off-pavement adventures. If you have strong feelings about sporty driving or off-road exploring you should keep an open mind. The Kona and Seltos may satisfy your needs on twisty roads or off-road unless your desires are pretty extreme.

Kia Seltos vs. Hyundai Kona – Warranty and Included Maintenance
One thing that separates the Kona and Seltos from worthy competitors like the Mazda CX-30 and Subaru Crosstrek is the outstanding warranty that Kia and Hyundai offer. With a five-year, 60K bumper to bumper warranty and a 10-year/100K drivetrain warranty for the first owner, the Hyundai and Kia simply have a huge advantage over other brands in this segment. Both have the same warranty, so in terms of the Seltos and Kona, the advantage is equal.

However, the Hyundai Kona also comes with three-years and 35K of included maintenance. That has a value of about $500. Why Kia isn’t also advertising / offering this same warranty is a mystery to us. Hyundai’s overall package is so strong we have begun to suggest Hyundai models to our friends and family who we know plan to keep a vehicle for many years and those who want a “fixed” cost of ownership.

Kia Seltos vs. Hyundai Kona – Which Would We Choose?
We have not tested the base trims of these two models, so we cannot recommend them. However, we love the Kona Ultimate AWD more than the Seltos SX Turbo AWD behind the wheel. The HUD in the Kona Ultimate AWD is also a great feature that we value. Keep reading! Yet, an AWD crossover with no spare is not a vehicle we would ever buy or recommend to anyone under any circumstances. It just doesn’t add up. Who would drive off-pavement without having a spare in the vehicle to get you home or to a tire store if you tore a sidewall? Particularly during COVID when the AAA tow truck won’t let you ride along. Who in a region that needs AWD would ever opt not to have a spare tire given the road damage caused by the freeze-thaw cycle? And why did Hyundai delete the spare just on some AWD trims? The space for the spare is still there. For that reason, the Kia Seltos SX Turbo AWD gets our nod. With its larger cargo volume and spare tire, the Seltos is a more practical vehicle, and in this segment that counts for a lot. That it is less expensive, even without included maintenance is just icing on the cake.

Peter wrote on November 10, 2021 - 3:10pm Permalink
Did not read all the article, just scrolled thru it, but i can tell you that my 2020 Kona Ultimate and other years that followed DO have heated steering wheels and headlights that shine to the sides ( the fog lights turn off when this feature is engaged).