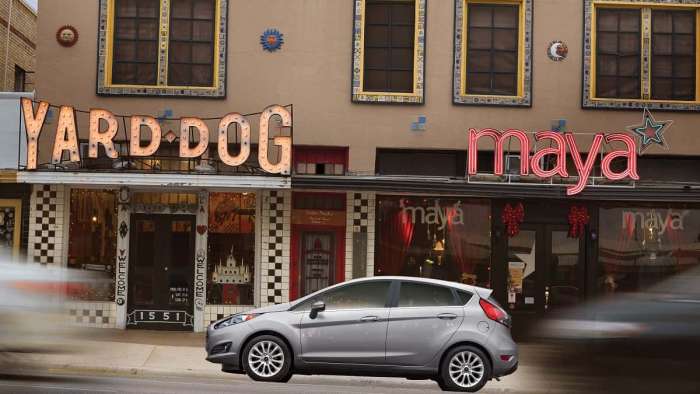 Buying Your Graduate A Car - Avoid These Models At All Costs

It's used car-shopping season. With graduates needing vehicles, here is the IIHS safety list of models you should avoid.
Advertisement

Just in time for the used car shopping season, the good folks at the Insurance Institute For Highway Safety (IIHS) have released an updated list of the deadliest real-world cars you can make the mistake of buying. We feel it is in the public interest to highlight the IIHS report in light of the fact that many families are now looking for used cars for graduates.

This new IIHS study looked at model year 2015-2017 vehicles. Police-reported driver deaths were analyzed and the driver death rate was calculated for each make and model in that span of model years. Every one of the deadliest models is an affordable small car that would be a very tempting pick for those in need of cheap transportation.

“Smaller vehicles offer less protection for the driver in crashes, and their lighter mass means that they take the brunt of collisions with larger vehicles,” says Joe Nolan, IIHS senior vice president of vehicle research.

Here is the list of vehicles with the highest driver death rates from IIHS: 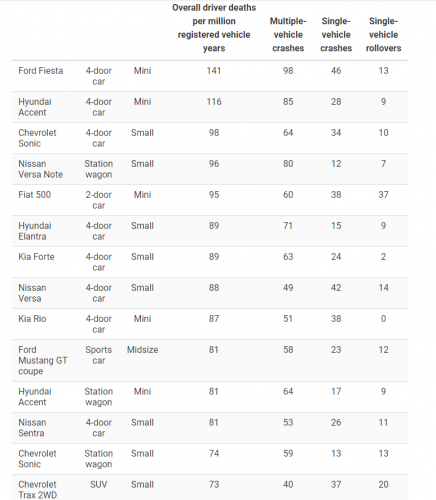 Vehicle With the Highest Driver Death Rate: 2015-2017 Ford Fiesta
IIHS says that the death rates for 2017 models vary widely from 0 for seven models to 141 for the worst performer, the 2017 Ford Fiesta. The subcompact Fiesta earned a “marginal” in the IIHS driver-side small overlap crash test. Including the Fiesta, about half of the 2017 models with the highest death rates were also among the deadliest for model year 2014. That was the last time IIHS looked at the data.

IIHS has calculated driver death rates every three years since the 1980s. The rates include only driver death rates, not passenger death rates. That is because all vehicles on the road have drivers, but not all of them have passengers or the same number and positioning of passengers. The data that IIHS uses comes from the federal Fatality Analysis Reporting System.

Small Cars Are Deadliest
Nine of the top ten deadliest vehicles on the list are small cars. The Mustang GT sports coupe sneaks in at number ten. Physics is not your friend in a small car. Less mass means less protection in a crash. Decade after decade, the IIHS study shows that small cars are the ones with the highest driver death rates. While large vehicles and four-wheel-drive models have lower death rates.

Better Affordable Vehicle Picks
For the most part, midsize crossovers and larger are the safest bet. They make up all of our recommended picks for graduates. However, not all small cars have high driver death rates. The Volkswagen Golf and Nissan Leaf both have stellar low drive death rate numbers. IIHS says in its report, "The Volkswagen Golf and the Nissan Leaf have death rates of 0 and 5 per million registered vehicle years, respectively. Their rates per 10 billion miles were the same. For comparison, the overall rate for small cars was 61 deaths per million vehicle years and 45 per 10 billion miles."

Those looking for a good used vehicle for graduates may want to carefully consider the safety of the vehicle they buy. In general, a midsized or larger crossover is the best bet, but this new IIHS study proves that there are good small cars and green cars from which to choose as well. For a full list of driver death rates by make and model, please see this IIHS list.