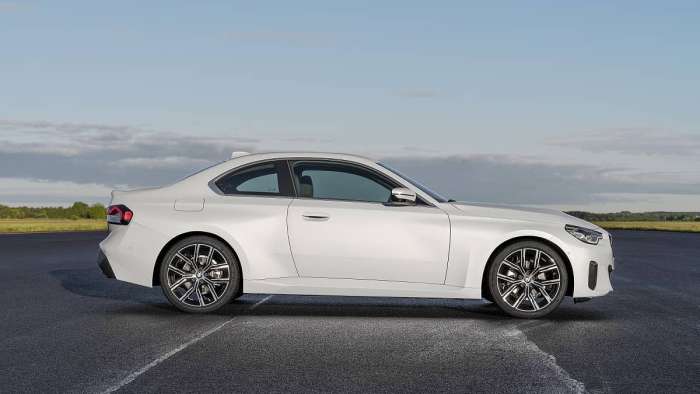 Torque News recently had an opportunity to test two of the best 2022 model year cars for sale in America today. Both were BMWs with roughly the same size interiors and the model lines offer similar performance. First, we experienced the i4 battery-electric vehicle. Next, we sampled what may well be the best current example of a “classic" BMW design, the 230i gas-powered car. While we loved both, there is a number we just can’t get past. The $28,500 difference in energy costs between the two. 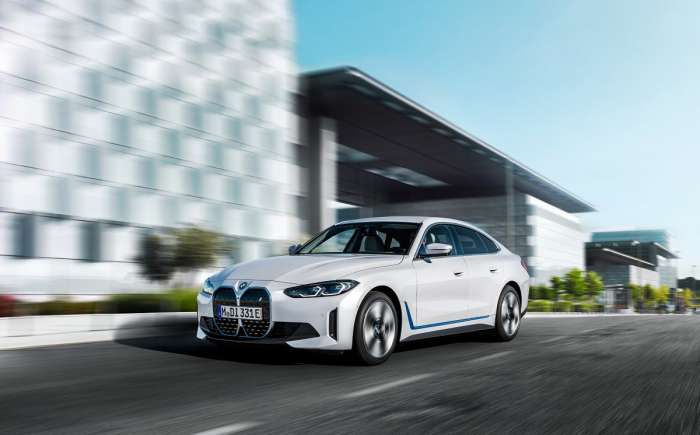 BMW i4 vs. 230i - Powertrains and Performance
The i4 comes in two versions. The rear-drive gran coupe base model i4 eDrive40 provides 317 lb-ft of torque and 335 hp. It’s rear-drive. Just the way BMW fans like their cars. It can scoot from 0-60 MPH in about 5.5 seconds. The BMW 230i is also rear-drive and has 295 lb-ft of torque and its peak horsepower rating at its redline is 255 hp. The 0-60 MPH time is identical according to BMW. You can get it as a two-door or a gran coupe. 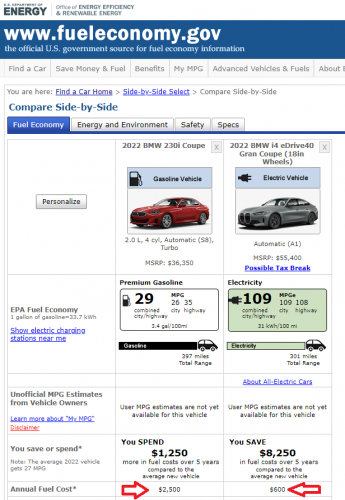 BMW i4 vs. 230i - Cost
Our test 230i had a price of just under $50K, and the i4 eDrive40 when similarly equipped would have a price after EV incentives of roughly $53K. However, the ownership cost between the two is night and day different. The reason is energy. The i4 has an annual energy cost of $600 and the 230i has an annual energy cost of $2,500. Do the goez intahs and the 230i will cost its owner $28,500 more over 15 years of ownership for energy costs alone.

What is $28,500 To You?
Let’s talk about what $28,500 is in terms of car value and general value. One way to look at it is that it is the cost of a new Miata. Also a rear-drive sports coupe. Would you rather own an i4 and a Miata or just a 230i? $28,500 is also about the cost of a year of college at UMass Amherst, one of the best colleges in the Northeast. It is also about the cost of 3 fancy trips with the entire family to Disney. Or the Grand Canyon. (I think BMW fans call it the gran canyon). It’s the cost of a swimming pool. Or about half the cost of a stand-alone garage. Let’s face it, $28,500 is such a massive difference in ownership cost that the i4 is clearly the logical choice. Oh, and it is likely to have a lower cost for maintenance in the long run. Worried about the battery? Sell the car before its 100,000-mile warranty is up. According to the latest study on used car popularity, EVs and other electrified models sell the fastest.

BMW i4 vs. 230i - The Driving Experience
So how do they drive? EVs kick gassers to the curb in terms of driving enjoyment on public roads. The throttle response is instant. Not turbo to spool, no gears to shift. The car just leaps forward when you toe the go pedal. EVs also have lower centers of gravity than gassers of similar shape. They are heavier. And on a racetrack where you can hang the tail out, the 230i may be the better choice. Or, you could just use your Miata on track days and drift all day long. Remember, you get a free Miata if you opt for the i4.