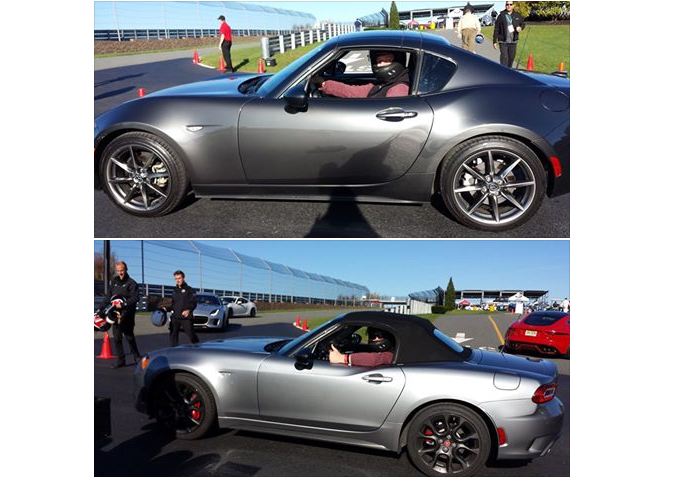 A long time Miata fan and owner weighs on the debate over which is the better track car, the Miata or the 124 Spider. The reason for the win is the biggest surprise.
Advertisement

This past week, Torque News had the opportunity to run the 2018 Fiat 124 Spider Abarth and the Mazda Miata RF back to back on the track at the beautiful Monticello Motor Club in New York State. MMC is one of the finest road courses in the Eastern United States and perfect for a comparison between these fun and capable track-worthy roadsters. Both were stick shifts and they even had similar paint. It was a fair fight and we aren't going to be wishy-washy about which was more fun to drive on that given day.

Fiat 124 Spider Abarth and the Mazda Miata RF - Engine & Transmission
The biggest difference between these two cars on-road is the engine and transmission. Both have their merits, but on-road I would pick the Miata every time. I love the way the Miata engine is linear from 900 RPM to redline. The dull spots in the Fiat's turbocharged engine just don't feel right in a roadster.

Despite the slight power advantage, the Miata is also quicker than the Fiat 124 Spider Abarth on public back roads, where acceleration past 60 MPH is really never going to happen. However, on-track one starts out with an aggressive launch and never sees low RPMs again until the time on the track is over. Here, the 124 Spider Abarth's turbo is not a disadvantage. In fact, the meatier mid-range torque means that if one chooses, one can skip a shift here and there compared to the Miata. I'd have to give the Spider Abarth the edge in terms of on-track engine response and performance.

Fiat 124 Spider Abarth and the Mazda Miata RF - Handling
The fanbase and motor press often say that the Fiat 124 Spider has less body roll than the Miata. I honestly don't care. The Miata's roll, and its up and down action are some of the things I love about the car. If I want a flat-handler I'll buy a Mini. No, I won't really, who wants a front wheel drive sports car? Still, they do feel different.

I've tracked the 124 Abarth twice now on different days and both times it slid around the track a lot. It was easy to make the car slide sideways and it is an easy car to oversteer with the throttle. This by comparison to the Miata, which feels more planted in corners. The Miata may well be a bit quicker in corners due to this, but I don't care. I want a track day car to be fun first and quick second. The 124 Spider Abarth is more fun because it is a car I can break loose easier. Advantage Spider.

Post-script - For the record, Car and Driver's instrument testing confirms my opinion that the Miata is quicker on-road and the Fiat 124 Spider Abarth quicker on track.

George wrote on October 27, 2017 - 2:57am Permalink
I guess it wasn't really a track day, because the Fiata would be ineligible as it sits...no hardtop or roll bar...so I would say it is not a "track day car"
John Goreham wrote on October 27, 2017 - 9:24am Permalink
Good point George. Like many Miata owners, a Fiat 124 Spider owner would be wise to add the equipment required for on-track use before heading out. They let us media run these cars stock on racetracks because, frankly, there are too many of us and they need to cull the herd.