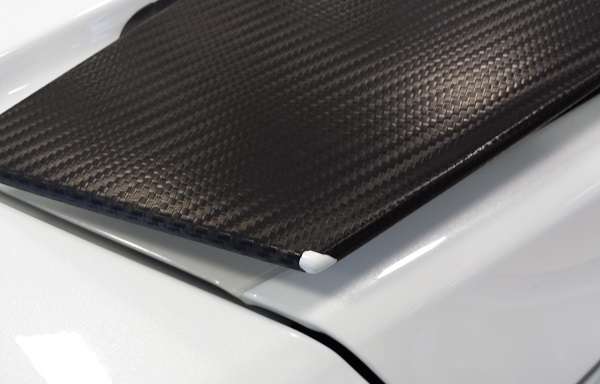 Our research shows that what is marketed as carbon fiber is not always the actual material.
Advertisement

Important performance parts on many sports cars are now made of carbon fiber reinforced plastics. This fantastic material has migrated down from supercars to production performance models. Cars like the $ 71,000 Alfa Romeo Spider use the material as the very basis for their construction. Carbon fiber is strong and light and is replacing aluminum on cars where weight is crucial to performance. The only drawbacks of carbon fiber are that is still costly and difficult to make, and it must be protected from UV damage with expensive coatings when used as an external component. For those willing to pay for the added lightness, carbon fiber parts can be a great option to consider. However, a recent trip to a Lexus dealer proves that not all components marketed as carbon fiber are real.

Faux Carbon Fiber Installed by Dealers
While looking at a new $ 77,000 Lexus RC F sports car, I was smitten with the look of the material and implied weight reduction of the carbon fiber roof and rear wing on a floor model. Having been to the RC F press release and having covered the car extensively, I knew that the one complaint some enthusiasts have with the RC F is its weight in comparison to rivals like the BMW M4. Optional carbon fiber parts reduce weight and bring the Lexus RC F’s weight closer to its competitors’. However, I noticed that the “Carbon Fiber” seemed to be peeling on this new floor model I was looking at. Upon closer inspection, I noticed that the “Carbon Fiber” seemed to be just a plastic decal. In fact, looking under the wing I could clearly see the product was just a plastic film applied over the original part.

The window sticker said that the dealer had added these components, and was charging a whopping $ 1,495 for the parts which it calls “Full Carbon Fiber Roof” and “Carbon Fiber Spoiler.” The price seemed more or less in line with real carbon fiber parts I have seen added to cars like the Alfa Romeo 4C I recently tested. The 4C offers a real carbon fiber instrument binnacle for $300.

Flagging a passing salesperson, I asked “What can you tell me about this carbon fiber roof and wing?” The salesperson did not even hesitate and said “Sir those are not actually carbon fiber components, but a wrap we apply here at the dealership.” The salesperson then volunteered “I can assure you there is room for a discount on those parts.”

Real Carbon Fiber Direct From Lexus
Lexus offers the carbon fiber roof and rear wing from the factory as part of its $ 5,500 Performance Package. The package includes ten different features, the most important of which is the Torque Vectoring Differential. The carbon fiber parts are mentioned by Lexus in its press release materials on the RC F this way: “And for drivers who don’t mind even more attention while reducing vehicle weight, there’s an available carbon fiber reinforced plastic (CFRP) roof and rear wing, developed from the LFA and IS F CCS-R racecar.” In its sales information Lexus says of these optional components, “CARBON FIBER COMPONENTS: Aesthetically arresting and geared for performance, the available Performance Package boasts exclusive track-ready materials and driving modes.”

Were this a car like the Toyota Corolla with an interior color called “Carbon Fiber” any reasonable buyer would assume the material was just plastic that looks like carbon fiber. However, this was Lexus’ flagship performance coupe I was standing in front of and the costs seemed in-line with the real material. The RC F’s direct rival, the BMW M4 uses carbon fiber extensively to improve performance and sells at the same price point.

Clearly there are two types of carbon fiber roofs, and wings available to buyers of an RC F. One is direct from the factory and made of the material known as carbon fiber. An equally expensive, fake carbon fiber part that offers no real benefit other than the look of the material is also sold by Lexus through its dealer network. As in all transactions, buyer beware.