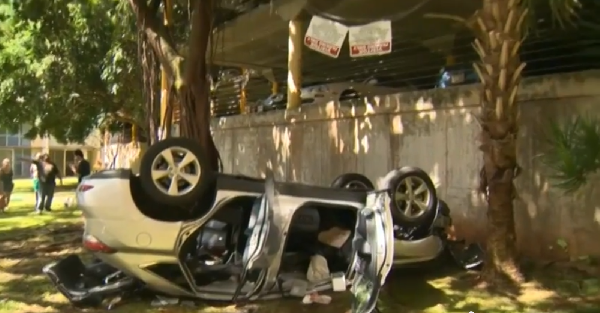 An elderly woman in Hawaii drove her Lexus RX 350 off a 4-story building, landed upside down, and not only lived, but exited the vehicle herself. Why this is no surprise.
Advertisement

Just how far vehicle safety has come in the past ten years was displayed in dramatic fashion this past week when an elderly woman drove her Lexus RX 350 off the fourth floor of a parking garage. The Lexus fell the full four floors and landed on its roof. Amazingly, the elderly woman driving the RX 350 crawled out of the mostly intact Lexus and was in stable condition following the crazy crash.

Roof Crush Testing
The Insurance Institute for Highway Safety (IIHS) is the organization here in the US that performs the most rigorous, and most highly respected, safety evaluations of passenger vehicles. Not long ago it instituted a new safety test that was intended to save lives in rollovers. The test placed a load on the top corner of the roof of a vehicle. The benchmark is that a vehicle should withstand four-times its own weight and allow only 5 inches of deformation. The Lexus RX 350 when safety tested by IIHS in its laboratory handled 4.27 its weight and thus earned a “Good” rating by IIHS. When tested by Ms. B. Taba last week in Hawaii, the rating was also good.

Crash Standards Now Very Tough
IIHS has also added a new small-frontal-overlap test that initially gave the manufacturers fits. It simulates a vehicle hitting a non-deformable object with just the front corner of the vehicle. Think telephone pole. Initially, vehicles that had been acing their crash tests failed, and redesigns are still on-going. With the new small frontal overlap test, IIHS has almost all real-life scenarios covered. Yes, excessive speed can still kill passengers, but at this point it is fair to say more time, weight, and money spent improving the crash structure of our vehicles is beyond the point of diminishing returns. So what next?

Driver Aids Now The New Safety Area To Watch
The new paradigm for automotive safety is not to build ever stronger vehicles, but rather ones that won’t crash. Just like in the structural safety area automakers and safety groups are focusing first on the most common types of bad accidents. Almost all vehicles in the 2015 model year above $30K will have forward crash prevention (FCP) made available as an option. As I have said in past stories, this is an option I will never buy a car without forward crash prevention again. This might even have kept Ms. Taba from going off the roof of the garage. It is hard to say. The barriers were just wires strung horizontally across the roof edge. A guard rail or other larger object would for sure have been seen by the current FCP systems and stopped her vehicle.

Conclusion – Lexus Is Good, but So Are Many Others
The vehicle 79-year-old Ms. Taba drove off a fourth-floor roof and was able to exit on her own, was a premium Lexus RX 350. Yes, the Lexus is a very well built vehicle. The great news is that with so much focus on vehicle safety these days, that is the norm, not the exception.