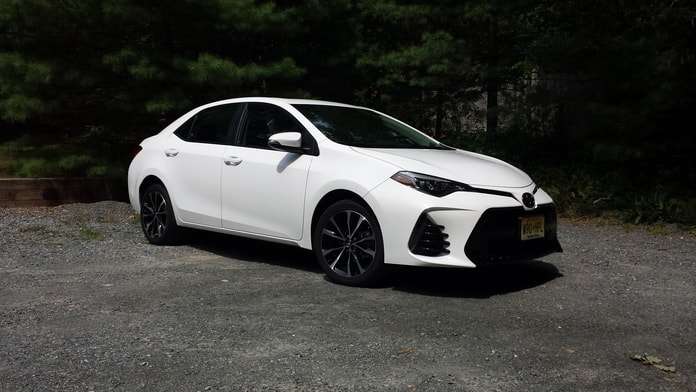 We test the Toyota Corolla SE with some odd add-on parts. An unfiltered opinion.
Advertisement

Toyota's generous media fleet program provided Torque News with an interesting vehicle this week. It is a Corolla, America's top-selling compact (really mid-sized) sedan. It is a good-looking SE, which in car talk is "Special Edition." It's even a stick shift, which if you read the boy-racer auto media is supposed to be what journalists want. The price is fair for what the SE buyer gets. So what confused us about this car?

Our $ 23,586 SE came with $928 worth of Toyota add-ons that we feel are worthy of a debate or analysis. First the easy one. A $199 Door Sill Enhancement. After a few days with the car, we have to report we never noticed the door sill enhancement. So, it is hard to understand who would notice it. And if it is un-noticeable, why have it?

The second two add-ons are an $80 TRD (Toyota Racing Development) Performance Air Filter and a $649 Performance Exhaust. These were hard to justify. If the Corolla's 132 hp were somehow made more impressive by these parts we would stand and cheer. With Civics costing $21,600 now coming with 174 hp turbocharged engines with great low-end torque, the Corolla needs all the help it can get. Based on our drive, the car is hurt, not helped by these expensive parts.

The Corolla is an acceleration-challenged vehicle. That does not mean we don't like it. In fact, in my first review of the current-generation car, my title included "...green, affordable, family car excellence." Our editor also liked the Corolla, calling it "New and Improved While Maintaining Affordability." We went even further with the iM trim of the Corolla, saying it was "Hard To Beat At $20K." So our judgment on the 2017 with a grand of parts that hurt the car is no evidence of bias against this hugely popular sedan.

The air filter may well be a performance upgrade, but it is not noticeable. The car is still almost shockingly slow compared to its peers the Civic and Mazda3. The exhaust hurts the car's livability. It is simply loud for no good reason. Around town, it is almost embarrassing to be driving a car of this type with the fart tube announcing itself. On the highway, the constant drone is hard to take. Now, let us tell you in defense of loud exhausts, that we have driven the Jaguar F-Type with its two-mode exhaust and we get it. Thumbs up. Also, we drove the Alfa 4C with its almost ridiculously loud track exhaust. We get it. We recently tried the Ford Focus RS and the exhaust was louder than the Corolla's TRD exhaust, but it fits that car's 350 hp hoonigan personality.

Our conclusion is a rare thumbs down for a Toyota product - The add-ons, not the Corolla, which we think is still an overall top sedan in this segment.

Mark Day wrote on August 24, 2017 - 1:54pm Permalink
Thanks for this insightful review. A similar situation: In checking out the 2018 Camry, at two local dealers, an annoying, and expensive, trend was noticed. There was about a $2,000 "pack" (additional mark up) on the Camry and other Toyotas. Additional "junk" was added to the vehicles, at the regional distributor, and by the dealer - paint "protection", etc. Items, such as with the Corolla experience, that I don't want. The Window Sticker was mandated for a reason, and the effort now to pad the MSRP cheapens the brand and defeats my desire to buy the product.
John Goreham wrote on August 24, 2017 - 5:10pm Permalink
Thank you for comment Mark. Well said. At a local mall, Mercedes displays its vehicles. I was shocked to see "Paint Sealer" and other unnecessary items added to the prices of those respected cars by the dealership. These brands risk the ire of the loyal customer base by adding in this type of unwanted and un-needed "junk."
Sam wrote on September 9, 2019 - 1:06pm Permalink
Paint sealer is a scam. It is actually paint insurance, the polymer sealant is similar to products like Liquid Glass which sell for $22. Actually you are paying the cost of the dealer repainting you car in the even of a rock chip ...etc. The problem is the public is dumb and believes these products protect against chips.