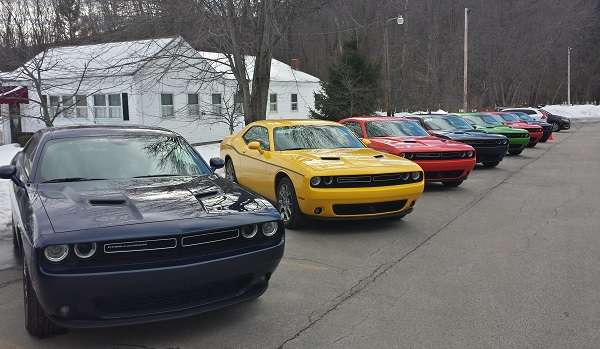 2017 Dodge Challenger GT: Does It Live Up To The Name?

We test the all-new 2017 Dodge Challenger GT with AWD and find it to be ideal for New England Grand Touring.
Advertisement

Wiki defines a car with the letters GT in the name as, "A grand tourer (Italian: gran turismo) (GT) - a performance and luxury automobile capable of high-speed and long-distance driving." We could not agree more.

Adding GT to a vehicle like the Dodge Challenger that has nothing to prove should mean something. We are pleased to report after a thorough first drive that when added to the Challenger, the name is perfectly applied.
- Read why Dodge didn't put a Hemi in this car.

Media test drive events in New England are rarer than hen's teeth. Nonetheless, Torque News was invited to spend some quality time in the all-new Challenger variant. Editor Patrick Rall and I attended on back-to-back days and we had a plan to focus on different aspect of the event and of the Challenger. My mission - to vett this car's qualifications as a grand touring vehicle. Patrick's focus was specifications and performance on-track. My part was more subjective. I needed to evaluate how the Challenger felt on the proverbial mountain roads on a long ride.

The weather was perfect for our tour. We set out from Portland Maine and headed West towards Club Motorsports, the newest, and perhaps the most exciting, racetrack in New England.

My test car's trim carried a $38K MSRP. By the pound, this 305 hp, AWD, 5-passenger coupe is a screaming value. Throw in a fantastic leather steering wheel, leather and Alcantara-trimmed seats, Dodge's fantastic infotainment system, and the Pursuit suspension Dodge uses on its law enforcement vehicles and it is simply an amazing deal.

The heated microfiber suede seats coddled us immediately and were perfectly built for a long, backcountry ride. In all, I spent about three hours driving and never felt anything but supreme comfort. Such trips can make a car with two six-foot passengers feel tight, but the Challenger has interior space to spare. Cargo area is enormous as well. This is a very luxurious car that never feels cramped.

Hearing the Challenger GT has the cop-car suspension, I assumed it would be overly stiff, but it was not. In fact, over frost heaves, it was very compliant. Yet, when turned hard into a long downhill corner with a decreasing radius the Challenger's race-bred pedigree was easy to feel. This is a sports car to the core.

At one stoplight we had a 45 MPH speed limit ahead and nothing but road, so I floored the Challenger. It does not leap off the line like the V8 variants do, but it takes off quickly and builds speed as the tall first gear gives way to second and third. The automatic transmission is smooth when cruising, but it snaps of fast crisp upshifts when pushed. Paddles are there to involve the driver.

Like all the Challengers I have driven, the brakes were excellent and inspire confidence. At no time does the Challenger feel under-braked when pushed a bit further than one expects.

Dodge uses a variety of inputs to actuate the AWD system in the Challenger including ambient temperature. We know from having spoken to the Dodge staff that our cars were using AWD most or all of the time we drove them, but they feel rear-drive. On a public road at arguably legal speeds the car does not understeer in a way that is unpleasant.

Overall, I would rate the $38K Dodge Challenger GT very highly as a grand touring vehicle. Without question, the setup that Dodge chose is a great match to the task. Sure, we all love a V8, but I never missed it during my evaluation.

Before I conclude this quick spin report I have to report on one more aspect of the Challenger. After we arrived at Club Motorsports my co-driver and I took turns flogging the same car we drove to the event on a rutted, snow and ice covered autocross course. The snow had semi-frozen in spots revealing six-inch curbs and deep holes in the hard-packed snow. I cannot image a more jarring surface for a car to cover. We beat that Challenger like it owed us money, just as others had all week long. My co-driver stuffed it so far into a snow bank that we had to shovel and push it out. Twice. I expected the tires to be out of balance, the steering to be out of alignment and was certain we had fried the AWD system's clutch and warped the rotors from doing brake-held burnouts. However, on the ride back, that car was smooth, tracked straight ahead, and had not a single rattle or buzz in the passenger compartment. This Challenger is built solidly. It is hard to overstate the abuse this car took. Yet it remained as refined as any luxury model.

Joseph H Gagne wrote on February 12, 2017 - 8:40am Permalink
I am leasing a ram 1500 after owning a 2013 challenger that I loved but couldn't get around in the snow.Definitely wanting to get back in Challenger gt !!!!