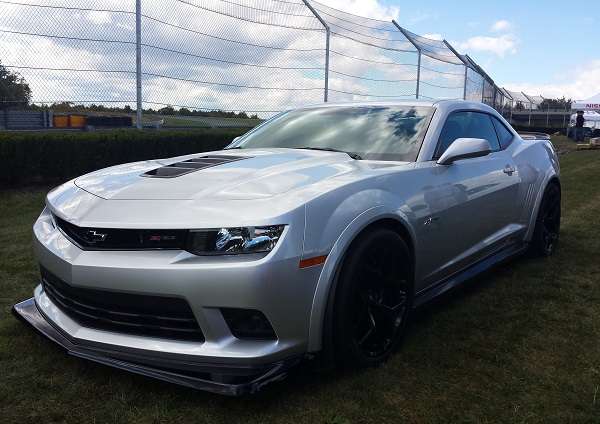 2015 Chevrolet Camaro Z/28 and ZL1 are like typical siblings. They look alike to outsiders, but those in the family see only the differences.
Advertisement

In a nutshell here is how you should think about the Z/28 Camaro and the ZL1: The Z/28 is the brother with the confident grin sipping a Gatorade at a party. The ZL1 brother is bursting in telling a dirty joke holding a bottle of Crown in one hand and the host’s girlfriend around the waist. The ZL1 is the brother with the dimpled chin and broad shoulders that will go on to make millions in sales. The Z/28 is the chiseled, wiry brother that is good at every sport. He’s an honor student, the varsity pitcher and point guard on the hoop team, and he starts every game. He also plays sax. This brother ends up owning his own company that supplies the music at live sporting events. He’s comfortable with all the business people involved and is invited to shoot around with the team during warm-ups in the pre-season.

ZL1 Camaro Continues to Impress
Two years ago I had the pleasure of driving the Camaro ZL1 and it became one of my favorite track cars. I figured, since it cost as much as a Corvette and was as capable, that it would be a short-run super-Camaro never to be topped. I was way wrong. Chevy is continuing to build the ZL1, and in many different configurations, including a convertible. I was also wrong that the ZL1 would be forever the “best” Camaro. Chevy builds at least one car that is its equal, in the way that only a brother can be.

Driving The ZL1 On-Track
The Camaro ZL1 on a track is explosive. The car turns amazingly well. Coming out of a corner you can floor the gas rather than roll onto the throttle because the engine takes a breath, then simply goes bang and you rocket forward as its supercharged 580 horsepower V8 builds its power seemingly all at once. It then can be shifted quickly, building speed as only a handful of cars under $100K can. A GM engineer explained to me that the beefy limited slip differential is the reason that you can put all that power down.

Then the next corner approaches. The brakes are insane. It takes a lap or two to believe in them they are so good. The car sticks forever and I have neither the skills nor intestinal fortitude to really slide the car around much. However, at the end of a corner I am able to use the throttle to get the tail out a bit. Basically I can have a lot of fun in a Camaro ZL1, but I can’t make it turn fast laps.

Driving the Z/28 Well Takes Skill
The Camaro Z/28 of my youth was a poser. It was a Trans Am for Chevy guys that didn’t want a screaming chicken on their hood. Yes, I know there were Z/28s at one point that in their day were track-cars, but who’s kidding who? Most of them were street cars with body cladding and the V8 mated to a questionable transmission. This new Z/28 could not be farther from that.

I asked a GM engineer to join me when I drove the Z/28 on the track after my time in the ZL1 this week. It was the best move I made. He knew the car inside and out and explained to me why it felt slower. He said that in the hands of a very skilled track driver (which I am not) the Z/28 has so much more balance than the ZL1 that it can build leads in the corners. The Z/28 is all about corner speed, braking, and balance. Yes, it has 505 horsepower. However, it being normally aspirated (no supercharger or turbo) the speed builds more gradually, so it feels less bombastic than its brother.

Having read about all the things GM took out of the Z/28 to make it lighter I was expecting a rough-edged car in side. Nope. Alcantara steering wheel, shift knob and seat. I didn’t use the (deleted) radio since I had a helmet on, but looking around inside it looks like any other Camaro. Outside the Z/28 looks different up front. It has the newer Camaro grill treatment, and the current ZL1 stuck with the prior look. The GM engineer told me it was more practical to just leave it alone after it was designed. Maybe it told them it liked its face the way it was and suggested they back away slowly.

Which Camaro Would I Choose?
The bottom line is that the $ 73k Z/28 is not as exciting a toy as the $60k ZL1 to me. I want my Camaro to be a bad-boy and to have that cannon of an engine. That the ZL1 has more amenities and costs less is just icing on the cake. Maybe you are a track star and plan to keep the Camaro for track days and trailer it around. The Z/28 is for you. I don’t care about miles per hour on the track. All I care about are smiles per mile, and the ZL1 is the winner by a country mile.

Leo Rolando wrote on November 3, 2016 - 12:47pm Permalink
know about these two beast is the best know about the changes on the next years...