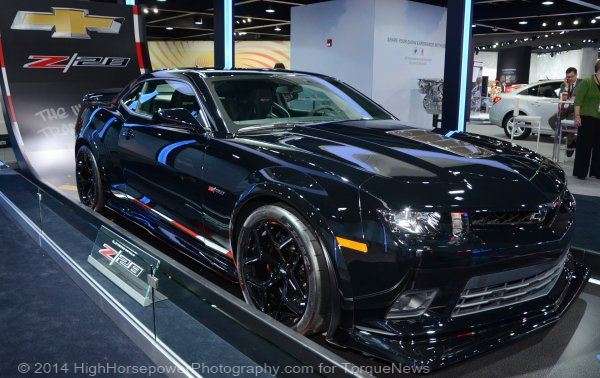 The folks at Motor Trend have compiled their list of the best driver’s cars for 2014 and after putting 10 performance models head to head, the 2014 Chevrolet Camaro Z/28 was chosen as the best of the bunch – beating a collection of cars that vary from the Ford Fiesta ST to the Porsche 911 Turbo S to the BMW i8.
Advertisement

Each year, the folks from Motor Trend pull together a group of performance cars and pit them head to head to pick the best “driver’s car” sold in America and for the 2014 shootout – they have chosen the Chevrolet Camaro Z/28. That’s right – when pitted against some of the best sports cars sold in America, a Chevy Camaro is the top dog among people who love to drive.

How the Best Driver’s Car Award Works
This is only open to vehicles that are new or significantly improved for the new model year while also being on sale when the testing is going on, so you won’t see the 2015 Ford Mustang, the 2015 Dodge Challenger SRT Hellcat or the Chevrolet Corvette Z06, but you will see 10 of the most exciting cars to drive on the road and on the track as determined by a group of journalists who drive pretty much everything sold in America. In addition to the writers from MT offering their input based on how these beasts drive on the road, pro racer Randy Pobst puts each car through the paces at Laguna Seca raceway to see which is the most capable in the hands of a professional driver.

In addition to the road course testing and the street drive, each car in the running has its quarter mile time, 0-60 time, 60-0 braking distance and MT figure eight test measures recorded as part of the process.

When you look at that list and see cars that are literally some of the best performing road cars in the world like the Nissan GT-R Nismo and the Porsche 911 Turbo S, it is hard to imagine that the lowly Camaro could knock them off, but the proof is in the pudding – the Z/28 is that good. Keep in mind, the Camaro Z/28 also won Car & Driver’s Lightning Lap shootout, beating some amazing performance cars in that content as well.

The Competition Results
Surprisingly, the Camaro Z/28 actually didn’t turn out the best performance times, as the aforementioned GT-R and 911 Turbo S beat the Camaro badly in 0-60, quarter mile time, figure 8 time, braking distance (GT-R tied the Camaro) and Laguna Seca lap time. Even though the rough and ready, race-purposed muscle car was slower than the Porsche and the Nissan supercar, the guys from Motor Trend still picked the Camaro Z/28 as their Best Driver’s Car for 2014.

Even more interestingly, the Porsche 911 Turbo S and Nissan GT-R Nismo didn’t finish in second either, as that honor went to the new Alfa Romeo 4C. Even though the tiny Alfa was among the slower cars in the competition while also being least power – MT still found the Alfa to be a better driver’s car than the top of the line Porsche and Nissan performance models.

Not surprisingly, this has drawn some criticism from the online world as fans of European and Japanese performance cars are freaking out at the suggestion that the Chevy Camaro and the tiny Alfa Romeo 4C could possibly be better than the Porsche 911 Turbo S and the Nissan GT-R Nismo. However, this competition is based on opinions and not hard facts – so the winner is the winner. I haven’t driven the new GT-R Nismo or the newest Porsche 911 Turbo S, but I have driven a previous GT-R along with 4C and I would agree that the little Italian coupe offers more raw driving fun than the high performance Nissan.

For complete results of the 2014 Motor Trend Best Driver’s Car you can click here to read the 11 page report on their website.