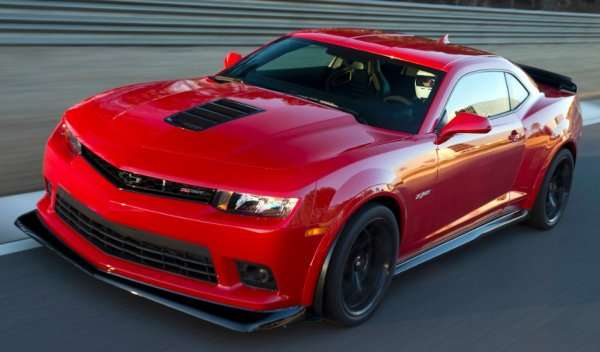 The folks at Car & Driver have recently released the results for their 2014 Lightning Lap in the October issue and the Chevrolet Camaro Z/28 turned in one of the most impressive times – beating the new Chevrolet Corvette Stingray and a long list of very expensive, very respected sports cars from around the world.
Advertisement

Each year, Car & Driver magazine holds their Lightning Lap challenge, where they pit a collection of new sports cars from around the world head to head on a road course. Today, C&D took 25 sports cars of varying levels of performance to Virginia International Raceway to see which performance models in the current US sports car market could lay down the best performance. Not surprisingly, on a list that includes the best sports cars from Germany, Italy, Japan and the United States, the top five spots were filled by a German car, a Japanese car, an Italian car and two American cars. What is a surprise is that one of those American cars is the Chevrolet Camaro Z/28.

A Muscle Car Among Supercars

For all of you skeptics out there who blew a gasket when GM announced that the Chevrolet Camaro Z/28 would cost $75,000, today is the day for you to eat your words (if you haven’t already), as the Camaro Z/28 stood toe to toe with a $318k Ferrari. Oh, the car that finished in 6th place, 3 tenths of a second behind the Camaro Z/28 in the 2014 Car & Driver Lightning Lap was the Porsche 911 Turbo S that starts at $182,700. Also finishing behind the Z/28 were the Audi R8 V10, the Jaguar F-Type R, the BMW M4 and the Chevrolet Corvette Stingray.

That’s right, the lowly Camaro was able to outrun the mighty Corvette Stingray on one of America’s most well-known road courses…although it should be pointed out that the Corvette including in the 2014 Lightning Lap had a price about $10,000 less than the Z/28.

Pummeling the LL3 Class
In addition to finishing in the top five and beating a long list of high end sports cars, the Chevrolet Camaro Z/28 handed a very sound beating to all of the cars in the LL3 class. In a group of seven cars that include the likes of the Mercedes Benz E63 AMG S, the Porsche Cayman S, the Jaguar F Type R Coupe and the BMW M4, the Camaro beat every car in the class by almost 10 seconds. The AMG managed to finish just a touch under 10 seconds behind the Z/28, but no other car in the class finished with 10 ticks of the naturally aspirated muscle car.

The Chevrolet Camaro Z/28 was designed to be the best handling muscle car of all time and the results of the 2014 Car & Driver Lightning Lap show that the GM engineers were very successful as, not only can it outrun any muscle car around a road course – but it can outrun most of the sports cars sold in the US.

Corvette Leads the LL2 Class
While the Chevrolet Corvette Stingray wasn’t able to beat the Chevrolet Camaro Z/28, it was able to turn in a very solid time and comfortably beat the other five cars in the class. With a time of 2:53.8, the Stingray beat the next best finisher in the class – the Mercedes Benz CLA45 AMG – by more than 12 seconds. The C7 Corvette also beat a collection of cars in the classes above it including the Audi R8, the Jaguar XKR-S GT and every car in the LL3 class aside from the Camaro Z/28.

For complete results on the 2014 Lightning Lap, you can pick up the October 2014 issue of Car & Driver pretty much anywhere.

John Goreham wrote on September 15, 2014 - 4:45pm Permalink
What I noticed right away is that the BMW M4 coupe got totally spanked by the Camaro Z28 and they share a price bracket. Everyone loves the new in-line turbo 6 that the BMW folks used, but it just got its butt handed to it by a normally aspirated V8 coupe. Maybe if BMW had stuck to the V8 it used to have and improved it, the results would have been different. Maybe not. GM does not even use its most powerful V8 in the Z28. The Camro beats it by 10 seconds. Nothing can beat the Camaro by that much and all the faster cars except the million-dollar+ Porsche 918 are within 1 second of the Camaro.
Sean Harlow wrote on September 15, 2014 - 10:20pm Permalink
Not to downplay the awesomeness of the Camaro at all, but the Z/28 is a dedicated track car where the M4 certainly is not. The M4 is a fast luxury car where the Z/28 dispenses with even such "luxuries" as air conditioning and a radio. They are apples and oranges. The Z/28 is a brilliant car but daily driving it would be insane in most areas. The M4 is daily drivable pretty much anywhere any performance car is feasible.
John Goreham wrote on September 16, 2014 - 9:27am Permalink
It is true that the M4 would be more comfortable than the Z28 as a touring car, but is the M4 not a racecar? Here is a quote by its designer, Albert Biermann "First of all, to go on with the tradition of bringing race car technology onto the road. That's the job of the M3 and the M4. And there's a lot of race car concept in the new car." In a Motor Trend interview Mr. Biermann referred to the M4 seven times (in the affirmative) as a race car in answering 5 questions. Does BMW have a more track-ready production car?