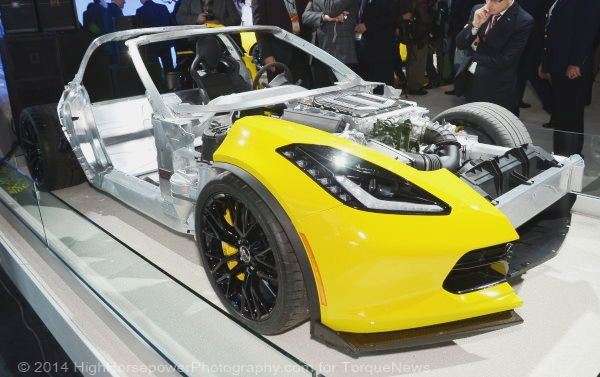 While General Motors hasn’t had much (or anything) to say about the 2016 Chevrolet Camaro, we can make guesses as to what we will see when the 6th gen F Body arrives by looking at the features of the current Corvette – including the new 8-speed automatic transmission that will make the Camaro quicker and more efficient.
Advertisement

I should start by saying that we officially know nothing about the 2016 Chevrolet Camaro. We have seen spy shots and I have seen a bunch of the camouflaged cars driving around my house in Milford Michigan, just miles from the GM Proving Grounds…but the company has been surprisingly tight-lipped in regards to the 6th generation Camaro. However, based on what we have seen over the course of the past few generations of both the Corvette and the Camaro, we can make some guesses as to what we will see with a reasonable amount of confidence. Most notably, if the past 20 years of GM history has taught us anything, it is that the Camaro generally gets drivetrain components after those bits debuted in the Corvette.

Based on that history, we can expect that the 2016 Camaro will utilize similar transmissions to those offered in the 2015 Chevrolet Corvette, including the 7-speed manual transmission and the new 8-speed automatic transmission…although the Camaro likely won’t feature the Corvette’s rear transaxle design.

While most Camaro buyers really don’t care about fuel economy, today’s auto industry demands that every car – even sports cars – are forever improving in the MPG category and we can expect that the 2016 Chevrolet Camaro will be more fuel friendly than the 2015 models. The new 7-speed manual and 8-speed auto could play a major part in improving the Camaro’s fuel economy levels, especially in terms of highway numbers. The Dodge Challenger is bigger and heavier than the Camaro yet it offers the best fuel economy in the muscle car segment – thanks to an 8-speed automatic transmission.

There Corvette transmissions in the 2016 Camaro wont make a massive difference in fuel economy, but when combined with the rumored-to-be-lighter chassis – the 6th gen Camaro should be more fuel friendly across the entire lineup thanks to the new transmission options.

More Gears = Better Performance
While it comes as a nice bonus for the 7-speed manual and 8-speed automatic transmissions from the 2015 Corvette Stingray to make the 2016 Camaro a bit more efficient, it will make a far bigger difference in the segment for these new gearboxes to make the 6th gen Camaro quicker and faster.

The advantage of having more gears is that you have smaller steps between gears which allows for quicker shifts and less RPM drop from gear to gear. Also, since you have “extra” gears to serve as the fuel friendly overdrive gears, the engineers and make the numerically lower gears more aggressive while the numerically higher gears compensate to preserve fuel economy. For instance, with a 6 speed transmission, the 5th and 6th gears are the overdrive gears, which offer less torque multiplication and less acceleration capabilities in those gears. However, with an 8-speed transmission, those 5th and 6th gears can still be aggressive enough to offer solid performance while 7th and 8th gear handle the overdrive duties.

Really, there is no downside to having a 7-speed manual or 8-speed automatic in the 2016 Chevrolet Camaro outside of the fact that these newer transmissions may cost a bit more to produce since they are newer technology with more moving parts. Even with that added cost in mind, I would be blown away if the 2016 Camaro was introduced without the same transmissions that are currently in the 2015 Corvette.