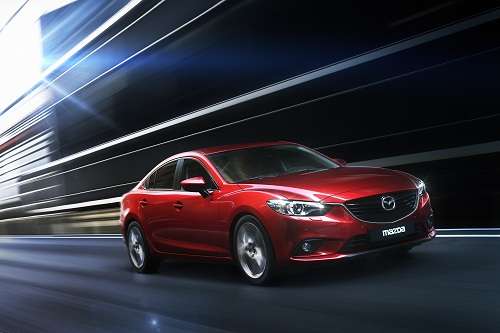 Class leadeing highway fuel economy, and pricing in line with the competitor's upgraded models should make the all-new 2104 Mazda 6 a winner.
Advertisement

The 2014 Mazda 6 will have a 2,5 liter, 4 cylinder, 184 horsepower engine mated to a six speed transmission. This power is more than the Malibu eAssist 2.4 liter by just a hair, and is more than the base Fusion engine, and also the step up 1.6 liter Ecoboost turbo engine (179hp) offered by Ford. It is 2 hp more than the Altima’s 182 hp.

In late September our own Aaron Turpen was among the first to report that Mazda had an all-new diesel engine that could achieve up to 60mpg. If that proves the case, and even if the Mazda 6 diesel is tested and achieves only 50mpg highway, it will pass the Passat Diesel which achieves 40mpg highway. Even the smaller Jetta Diesel achieves “only” 42mpg. Mazda announced only gasoline versions of the Mazda 6 today, but the news in no less remarkable. Mazda is reporting that the EPA rated the new Mazda 6 with a 4 cylinder engine and six speed automatic at 26 City, 38 highway (!), and rates the car at 30 mpg combined. This is not a hybrid automobile. These numbers surpass even the Chevy Malibu light-hybrid “eAssist” model which is rated lower at 25/37 for an overall 30 mpg rating. For comparison, the new Ford Fusion’s gasoline engine without a hybrid drive, achieves 22 city and 34 highway. The new Mazda exceeds the new Fusion’s highway mileage by more than 10%. It is fair to say that Mazda has an amazing vehicle on its hands. There is one gasoline powered vehicle in America in this class with a non-hybrid engine that is better, and that is the 2013 Nissan Altima. That vehicle is rated at 38mpg highway, but has an overall 31mpg rating. It should be noted that the Altima comes with a constantly variable transmission (CVT). CVT transmissions do not behave in the same manner as geared automatic transmissions, and some customers may not like the different sound and feel.

Mazda builds in a lot of value options throughout the line. For example, tilt and telescope steering column, and AC are standard on all models. BlueTooth, HD radio and a back-up camera come with the automatic transmission, along with other upgrades. These prices are in-line with the light hybrid Chevy Malibu. Safety features such as blind-spot monitoring, cross traffic alerts, and adaptive front headlights appear on the touring and grand touring models. Be sure to look closely at dealer inventory to see if these features are available on models in stock.

The 2014 Mazda 6 is on sale now. Mazda plans to introduce the 2.2 liter diesel engine mid-year.

Elon Makes a Cybertruck Statement With an Action, But Quiet in Words
Tesla's Record Month in China: Doubled Registrations in March 2021
END_OF_DOCUMENT_TOKEN_TO_BE_REPLACED