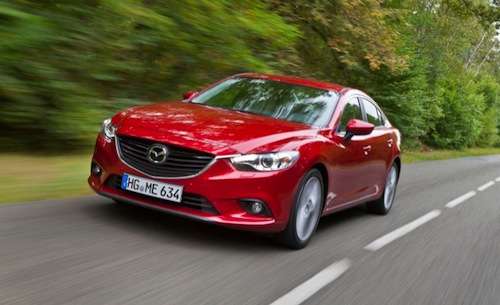 Mazda will be launching the first diesel in the U.S. and it will be offered in the all-new 2014 Mazda6 next year.
Advertisement

We knew that Mazda was announcing a new 2.2-liter clean diesel for the U.S. market, but didn’t have details on which models it would be offered in. The new SkyActiv-D diesel has been offered in Europe and other global markets, but the U.S. wasn’t on the list to receive the fuel-stingy oil burner. But Mazda has just announced that the 2.2-liter clean diesel engine has arrived, and will be featured in the all-new 2014 Mazda6 starting next year in the U.S.

The new Mazda6 is making its North American debut at the Los Angeles Auto Show, and will go on sale here in January 2013. The highly-anticipated mid-size sedan will be the first Mazda ever, and the first Asian automaker to feature to offer a modern-technology diesel engine in a non-commercial vehicle. Diesels are starting to catch on here in the U.S. and we seeing more manufacturers making the commitment to offer the technology in the U.S. Audi has just announced they are bringing four new diesel models to the U.S. next year.

The new 2014 Mazda6 will also feature a fuel-efficient SKYACTIV-G 2.5 direct injection gasoline engine. But the big news is, the first-ever SKYACTIV-D-diesel equipped version will be available during the second half of the year in the new mid-size sedan. The new SKYACTIV-D 2.2-liter clean diesel engine will achieve a low compression ratio of 14:1, and is estimated to produce 184 horsepower and 185 lb-ft of torque.

Mazda says the U.S. version of the SKYACTIV-D 2.2-liter diesel is 10 percent lighter than the current MZR 2.2-liter diesel engine sold around the globe. Other improvements will include a 20 percent reduction in internal engine friction and improved fuel economy over the European version. A new two-stage turbocharger coupled with a low compression ratio allows the SKYACTIV-D diesel engine to burn cleaner and discharge fewer emmisions which helped the Japanese automaker get EPA approval here in the U.S.

More details and news to come

Jim O'Sullivan, president and CEO, Mazda North American Operations says, "We've dangled the carrot long enough and we couldn't be more excited to officially introduce North America to our latest next-generation product, the 2014 Mazda6, as well as showcase even more engineering accomplishments under our SkyActiv technology umbrella with the SKYACTIV-D clean diesel engine. As Mazda continues to grow and SKYACTIV Technology continues to offer real-world efficiency and performance, our Los Angeles announcements are only tips of the iceberg.  The best is yet come."

The new Mazda6 diesel will come mated with a choice of SKYACTIV transmissions in either the SKYACTIV-Drive six-speed automatic or SKYACTIV-MT six-speed manual. Official EPA fuel economy numbers for the 2014 Mazda6 are not yet available, but Mazda says they will be “class leading.” Mazda also hasn’t released any performance numbers for the highly-anticipated mid-size sedan. Final specifications for all 2014 Mazda6 models will be available closer to the on-sale date in January.

Mazda is certainly on the cutting edge of diesel technology and the all-new 2014 Mazda Mazda6 will be a fuel-efficient mid-size sedan and wagon when they arrive in the U.S. later next year with the new SKYACTIV-D 2.2-liter diesel.