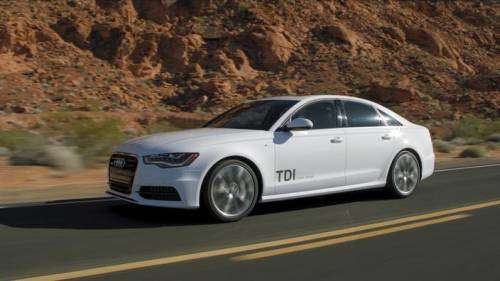 Audi introducing four new diesels to the U.S. in 2013 [updated]

Audi of America announced today the arrival of four new TDI clean diesel models for the 2014 Audi A8, 2014 A7, 2014 A6 and 2014 Q5 lineup. Audi will unveil the four new models at the 2012 Los Angeles Auto Show later this month. This will be the first time Audi will feature a full lineup of TDI clean diesel vehicles in the U.S. as they join the updated 2013 Q7 model. You can see the 2014 Audi TDI family in the video below released from Audi. Europe has had the clean diesel technology for decades and the German automaker has made the commitment to spend the money to get U.S. certification. It’s an expensive process, and it shows that Audi believes Americans are ready to buy the efficient engines.

Audi will introduce the new Audi A8, A7, A6, Q5 and an updated Q7 with the new TDI 3.0 liter V6. The new 3.0 liter TDI diesel engine generates 240 horsepower and 406 lb.-ft. of torque and sprints from 0-60 in 6.4 seconds. Audi says their TDI vehicles will deliver up to 30% better fuel economy and 30% lower carbon dioxide emissions than gasoline engines. Diesels have been known to be more fuel efficient and provide more power than a typical gasoline powerplant. The German automakers have taken the lead in bringing fuel-efficient diesels to the U.S., even though other manufacturers offer the technology around the globe.

Based on the current Audi A3 TDI and Q7 TDI vehicles, Audi says, “Owners of Audi TDI engines have helped save over 4 million gallons of gasoline, or the equivalent of more than 240,000 barrels of foreign oil, since the introduction of Audi TDI to the U.S. in 2009,” said Scott Keogh, President, Audi of America. ” And, TDI technology delivers better fuel efficiency without sacrificing performance.”

The 2014 Audi A7 TDI clean diesel will make the luxury sedan even more fuel efficient than ever. The TDI clean diesel engine will help all four new Audi models to experience a longer range and fewer trips to the fuel pump. By having more density than gasoline, diesel packs more energy content in the same amount of fuel, which helps maximize the miles per gallon when that energy is released during a more powerful combustion cycle.

It’s nice to see Audi taking the lead in offering diesel engine technology to the U.S. market for their entire lineup. Maybe we will see other automakers step up and make a similar commitment by getting their engines certified here in the U.S. Look for the new 2014 Audi A8, A7, A6, Q5 TDI models and an updated 2013 Q7 to make their debut in LA.

Check out the 2014 Audi TDI family video below: