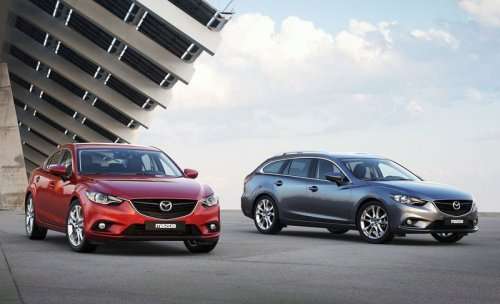 The new Mazda6 sedan and wagon were unveiled at the Paris Motor Show with the sedan getting a mind-numbing 60mpg US.
Advertisement

Mazda had previously announced that the all-new Mazda6 would debut at the Paris Motor Show this month. The unveil included something phenomenal..

The third-generation Mazda6 diesel would not only include the company's great new i-ELOOP brake regeneration system, but it would be capable of 60 miles per gallon by U.S. measurement standards.

The car will be available as both a sedan and a wagon (pictured here in European specification) and will have a full suite of Mazda's SKYACTIV technologies inlcuding i-stop (idle-stop system), i-ELOOP, chassis and powertrain efficiency improvements, and more. Two diesel and three gasoline engines will be offered in Europe for the car, each coupled to either a 6-speed manual or automatic transmission in this Mazda6.

Fuel consumption in the smaller of the two diesel engines will achieve 3.9 liters per 100 kilometers, which translates to 60mpg U.S., and CO2 emissions of only 104 g/km in the Euro combined cycle.

The i-ELOOP system, debuting in the Mazda6, is a new brake energy regeneration system which uses a supercapacitor instead of batteries or an expensive hybrid drive train to capture some of the kinetic energy of the vehicle's braking as electricity. This is then used to slowly feed back into the vehicle's battery and immediately power accessories and electrical components, which improves fuel economy by removing alternator weight.

It all came about as Mazda’s engineers determined that a typical vehicle deceleration phase lasts only about 10 seconds. Since conventional (and cheap) lead-acid batteries do not absorb electricity very quickly or in quantity, the engineers instead adopted an electric double-layer capacitor (EDLC), which recharges fully within only a few seconds. A DC/DC converter then steps down the voltage to power electrical components like the climate control and audio systems, with any surplus going to the starter battery in a slower trickle that it can handle.

At idle stop, which generally occurs after the car has been braking, the engine shuts down and the capacitor can feed electrical systems for up to a minute (including radio, climate fans, and more). This takes weight off the vehicle's battery during i-stop as well.