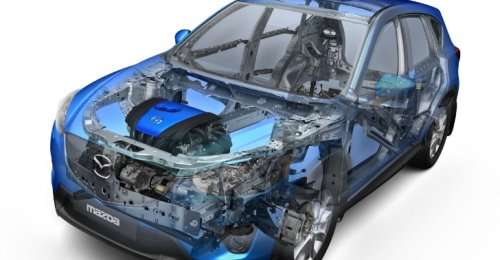 If you've got a good thing, run with it. Mazda plans to take its SKYACTIV technology and put it into more vehicles, faster, doubling production in only a few months.
Advertisement

Mazda has announced that they plan to double SKYACTIV engine production from the current 400,000 units for global distribution to 800,000 units in October and is tooling factories to make this happen. With this taking the role as the flagship for their efforts to increase fuel efficiency by 30% by 2015 for all of their vehicles, globally.

Currently, the 2012 Mazda3 and 2013 CX-5 in the United States feature SKYACTIV technology and the upcoming 2014 Mazda6 will be the next vehicle in this market to see it added. The 30% global goal will correspond with a 23% fuel consumption drop in the U.S. and the lower CO2 output that goes with that.

In June, more than 55% of Mazda's total U.S. sales were in vehicles that included SKYACTIV technology and the company wants to see that grow, says Jim O'Sullivan, president and CEO of Mazda North American Operations. This increase in sales will be spearheaded by the CX-5 with its best-in-class fuel economy.

The SKYACTIV system consists of a re-think of the entire vehicle. This starts with engines, including the SKYACTIV-G and -D lines (for gasoline and diesel respectively) coupled to SKYACTIV-DRIVE and -MT transmissions all nestled in a SKYACTIV-BODY riding on a SKYACTIV-CHASSIS.

The Engines
In the gasoline engine, the SKYACTIV system consists of a high-efficiency direct-injection block with the world's highest compression ratio for a production gasoline engine at 14:1. This increases fuel efficiency by 15% and boosts torque by the same, while spreading the optimum torque RPM to lower ranges, improving low- and mid-speed power and efficiency - the areas where most passenger vehicles do most of their work.

In the diesel engine, the opposite effect is called for. In diesel, the lower the compression, the better the efficiency, so by lowering the diesel engine's compression to 14:1, a 20% fuel economy was gained and aftertreatment systems are not needed thanks to the side benefit of this ratio's low NOx emissions. A two-stage turbocharger boosts low- and high-end torque to counter the stutter a low-compression diesel often has.

The Transmissions
In the MT line, which is the manual transmission line for SKYACTIV, Mazda lowered weight and shrunk the size of the units to better economy. Ratios learned from the company's sporty MX-5 line give the MT's a shorter shift stroke and reduced weight by 16% as well as less internal friction loss.

The DRIVE is the automatic transmission, which combines facets of conventional automatic, continuously variable, and dual clutch transmissions to better performance and efficiency. Using a combination of these things, Mazda's DRIVE has two clutches (one for even and one for odd gears), planetary gear sets for specific gearing with integrated CVT for gear reduction ratio improvement. This all adds up to a 4-7% fuel economy improvement, depending on the size of the transmissions being compared (current vs. SKYACTIV tech).

The Body
As most manufacturers are doing, Mazda looked to lighten the body and achieved 8% weight reduction while increasing rigidity by 30%, but still preserving crash safety performance. A continuous framework with angles meant to strengthen and absorb, the SKYACTIV-BODY has few curves in its under-structure. The continuity continues upwards from the frame, creating crash rings around the passenger cabin that both increase strength and add rigidity. The whole structure is built to both hold its firmness at speed and pass the load of a collision along multiple lines to reduce impact.

The Chassis
All of this rides on the newly-developed suspension systems built specifically for electric power steering, reducing weight by 14% along the way.

This all comes together to make for more efficient vehicles. Vehicles that are achievable in quantity now. The increase in SKYACTIV engines being produced will coincide with Mazda's introducing revamped models with SKYACTIV components to reach that goal of 30% by 2015.