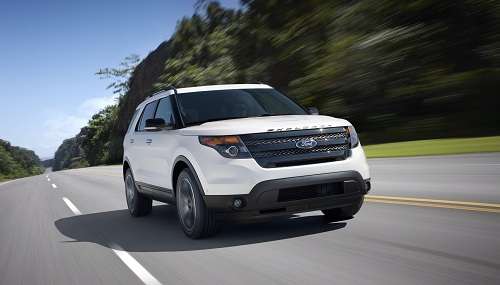 2013 Ford Explorer Sport has the punch, style, and swagger to bring back the faithful

Ford has introduced a new 2013 Ford Explorer Sport edition which packs a lot of muscle, sport, and style into the favorite which had fallen from grace.
Advertisement

The Ford Explorer popularized the mid/full size sport utility vehicle. Its strong sales for many years could be counted on to help Ford’s bottom line. However, there came a time when the body-on-frame vehicle had passed its prime. Some bad press regarding rollovers, and other factors including high fuel prices, eventually slowed sales considerably. Ford is not a company that shrinks from a challenge however, and the vehicle was redesigned resulting in the new version now available. Sales have been robust. In order to expand the market for the Explorer to those customers seeking a more sporty , upscale ride, Ford is now offering the 2013 Explorer Sport.

Explorer Sport EcoBoost® Twin Turbo V6 Engine
The time of the V8 has passed for most vehicles. Sure, there will always be a great V8 in the Ford line-up when it makes sense for nostalgia or ultra-performance applications like in the Mustang GT, but for everyday duty smaller, forced induction engines, are the wave of the present and future. The new Explorer Sport will feature a powerful V6 engine with not one, but two turbochargers. The engine is reported by Ford to be able to produce over 350 horsepower. In order to make the most of that power, Ford plans to fit the Terrain Management System™ to the Sport. This all-wheel-drive system, coupled with a beefed up suspension, will allow the Sport to put down the power when being used a street machine and still be able to soft-road when the driver wishes.

Impressive Fuel Economy
Matching the performance credentials of the new Explorer Sport will be its fuel economy. The Sport is projected to surpass the fuel economy of rivals such as Range Rover Sport and Grand Cherokee. Although this vehicle will likely attain about 22 mpg highway, it will be better than if a V8 was used. Ford should feel no guilt introducing this special version of the venerable Explorer given that it has made a huge push to increase overall corporate average fuel economy.

Upscale Style
The 2013 Explorer Sport will add upscale features not commonly paired with a muscular SUV offering. The trim will feature a black-out treatment and the grill will have a gray matt finish. The front will have a special lowered fascia with induction for cooling air. Inside the upscale feel starts when the door is opened and the driver is treated to illuminated scuff plates. Specially trimmed leather seating will be available. 20 inch wheels complete the look.

The 2013 Ford Explorer Sport will set a new level for the class in terms of power, comfort, and style while returning good fuel economy.

Toyota's First EV Will Have a Name of BZ: Toyota BZ
First Videos From Inside The Boring Company's Las Vegas Loop
END_OF_DOCUMENT_TOKEN_TO_BE_REPLACED