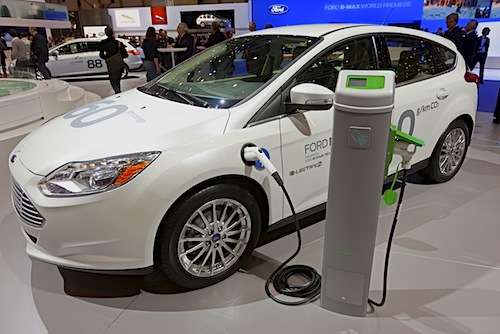 You have to hand it to Ford when it comes to intelligently revamping its brand name, turn around and embrace the alternative drive, while intelligently increasing gas mileage with its gas cars.
Advertisement

Ford has come a long way and the carmaker has an impressive offering of fuel efficient cars this year, no less than 9. The company is continuing to increase its resources on its largest research laboratories to further developments of hybrid, HEV, plug-in hybrid, PHEV and electric vehicles, EV in order to raise their fuel-efficiency. The comeback kid has a lot to celebrate. A streamlined company means no longer designing cars for three different markets in the four corners of the world, everything is done under one department. No longer is there a need for production in various countries, everything is made centrally and shipped worldwide. But the really good news is the over all strategy.

Coherent Strategy. There is only one way to come out of a crisis and a recession, a company needs a coherent strategy. In this department, Ford has beaten the odds and excelled. While most companies understand the need to continue selling its bread and butter internal combustion engine cars, ICE they far too often paint a overly optimistic green face, highlighting the single truly greener product they have to offer. Ford has chosen a logical way to move forward. Bring in the smaller displacement European engines, slap on direct injection and turbos and downgrade the bigger ones. What this means is now an EcoBoost V6 replaces the normally aspirated V8, the 4 cylinder EcoBoost outperforms the normally aspirated V6, all in terms of fuel consumption and horsepower. If only 7 cars had the EcoBoost option last year, 11 will do this year. This takes care of lowering fuel consumption on its gas cars and in order to do this, the company will use its engineering center in Dearborn, Michigan as the epicenter of its efforts to develop fuel-efficiency technology.

Pushing Hybrids. The Ford Explorer Hybrid was, and I believe still is the only SUV that gets 34mpg in city driving. Its Atkinson tweaked gas engine and its battery pack makes this SUV a natural for those needing the space but can’t muster $150 worth of gasoline a week. The Fusion Hybrid also does particularly well and was “created” after the company realized the Ford of 10 years ago had no mid-size sedans worthy of its name and terrible gas mileage. The 2013 Fusion Energi also promises to deliver much bang for its buck going head to head with GM’s Volt. It should make for an electrifying competition… I had to say it!

Introducing The Electric Car. While Ford wasn’t the first one to deliver an EV, the 2012 Ford Focus Electric delivers the best eMPG consumption, 105 translated mpg at the moment. The car also inherited the newly redesigned face of the company, so well worn on the new Fusion.

All in all, Ford has much to celebrate with its intelligent and inclusive offering. Five years ago the company only had 500 people on its electric platform. Today that number ballooned to 1,000, doubling its effort. While the company’s goals seem lofty, 10 to 25% of its electric car sales by 2020, most analysis predict only 5% by then, a number on par with the adoption of hybrids over the last decade. All in all, Ford is riding a high wind forward with 9 over 40mpg cars thanks to its EcoBoost technology, including a hybrid Fusion and an electric Focus.

Toyota's First EV Will Have a Name of BZ: Toyota BZ
First Videos From Inside The Boring Company's Las Vegas Loop
END_OF_DOCUMENT_TOKEN_TO_BE_REPLACED