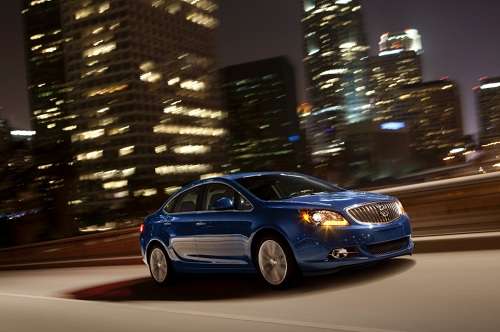 That price will help the Buick get noticed in a very tough market segment as it tries to win customers from luxury makes Lexus, Acura and Infiniti, but the mainstream brands seem to be the Verano's real competition.
Advertisement

General motors today announced that the 2013 Buick Verano Turbo will be priced under $30K to start. The Verano is Buick’s compact sedan and will be built to offer both luxury and also sportiness. This is a segment that is hard to define. The Verano is slightly longer than a Ford Focus ST, and slightly shorter than a Hyundai Sonata 2.0T. It is almost the same size as a Toyota Camry V6 (same width, slightly taller, slightly shorter). However, the people at General Motors don’t want the Buick Verano Turbo to compete with these cars, it wants to take on the Lexus IS line. The worst thing that could happen would seem that it might succeed. Lexus doesn’t sell that many IS sedans.

The new GM prides itself of fuel economy, but the 2013 Buick Verano is only average. Buick reports a city mpg of 20, a highway rating of 31mpg for an overall score of 24 mpg for the Verano Turbo. Buick’s main problem is that the Toyota Camry V6 actually has a better overall rating at 25 mpg. In a press release, Buick states that “The available Ecotec 2.0L turbo… makes an estimated 250 horsepower ... It provides on-demand power comparable to a V-6, but with the efficiency of a four-cylinder….” The problem with this statement is that the Verano Turbo does not offer the efficiency of a four cylinder engine, nor does it have the same power as any of the competitor's recently introduced V6 engines. In fact, as the Camry example shows it is not even as fuel efficient as a more powerful V6 offered by Toyota in a slightly larger vehicle. Another example is the Sonata 2.0T (Turbo). This car has been available for sale now for a few years and is almost ready for its next design. The Sonata gets 34 mpg highway and an overall rating of 26mpg. Buick is jumping into a market where all of the competitors have more power and get better fuel economy. The Hyundai Sonata 2.0T, Ford Focus ST, and Toyota Camry V6 SE all have prices within a few hundred dollars of the Verano Turbo when similarly equipped.

Buick hopes that it will be seen as the equal to a Lexus, Acura, or Infiniti. Time will tell, but customers generally shop with their wallets. The Buick is priced almost exactly in line with the Camry and Sonata. These are not sports cars, and the Verano may surpass these cars in handling, particularly if sporty handling is what the customer wants. However the Ford Focus ST would seem the logical choice if that were a customer’s main objective. The ST is just plain sportier, and less expensive when similarly equipped. In terms of straight line acceleration the Verano will be seen as average. The Camry is about a half second quicker to 60 mph, the Sonata about a half second slower, and the Focus ST almost exactly the same.

Buick has launched the 2013 Verano Turbo in hopes of taking on luxury car makes, but has come to market with performance and fuel efficiency that is ho hum. It remains to be seen if styling, handling, and perceived quality will push this brand and this model past the mainstream models it so closely matches in all measurable areas.

Author's note: Fuel efficiency and pricing comparisons per manufacturer's "Build Your Own" configurators.

gseay wrote on August 8, 2012 - 10:40pm Permalink
Why did they copy the grill from the current Lincolns who copied it from the 1939 LaSalle?