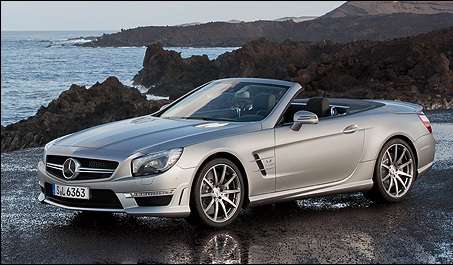 Mercedes introduces SL63 AMG, but is the SL65 coming too?

Mercedes-Benz has introduced the SL63 AMG, giving auto enthusiasts reason to gasp in anticipation, but rumor says it may get even better as an SL65 might be on the horizon.
Advertisement

Anyone who loves cars (and who doesn’t?) has a soft spot for the Mercedes-Benz SL. This affinity goes back to the famous 1954-57 300SL Gullwing that captured imaginations then and continues to do so now as a highly sought-after collector’s model. Every subsequent SL is judged against that model. And so the announcement of new versions makes car lovers’ hearts beat a little faster. Let the palpitations begin as Mercedes announces it’s newest version - the Mercedes-Benz SL63 AMG.

Mercedes introduced the new sixth generation, all aluminum, 2013 SL-class at the Detroit auto show a couple months ago. As usual this new SL is a fast, powerful, roadster. The Mercedes-Benz SL63 AMG version takes that to a new level. The AMG car was just introduced to the world yesterday from the Circuit de Catalunya in Barcelona, Spain, and “will hit showrooms” sometime around mid-July. It’s unknown whether any actually will make it to a showroom, however, as all models likely will be pre-sold.

The inside of the Mercedes-Benz SL63 AMG is beautifully designed and built. But the outside styling of the car is disappointing. As always the AMG version mostly differentiates itself only slightly from the base version with different lower skirting and fascia. Unfortunately, the base car design is poor and the AMG modifications can’t fix it. It’s too bad given some of the beautiful designs in Mercedes’ history, but this latest descendent of the 300SL Gullwing probably won’t make the top ten list.

From the front, the headlights look like an afterthought—they don’t flow with the lines of the hood or the fenders. Headlights should initiate the design drama as the front corners that tie in the “face” of the car, the hood, and the character lines that flow from there along the sides to the back. These simply don’t work. So too, the giant lower front air intake seems to be pushed up into the grille opening rather than being integrally designed. The side skirting, frankly, just looks silly. And what’s with the large plastic black dome on which sits the iconic Mercedes star in the middle of the grille? The car is best viewed inside from the driver’s seat or outside from the rear, which, with its 4.1 second 0-60 acceleration, is probably the view most observers will have!

The new chassis is built from aluminum and magnesium making this car lighter and stiffer than the last generation. It weighs 4,059 pounds, 275 pounds lighter than the last version, but it’s still heavier than the Mercedes-Benz GLK 350 SUV! At least with that weight the giant 285/30 rear tires are well planted to the ground.

Beneath the hood this car is a thing of beauty. Each engine is built by hand and signed by one craftsman. The “base” AMG engine is a twin-turbo 5.5-liter V-8 delivering 530 horsepower, 590 foot-pounds of torque, and runs from 0-60 in 4.2 seconds with a 155 mph top speed. Also available is an optional AMG Performance Package that increases output to 557 horsepower, 664 foot-pounds of torque, and accelerates from 0-60 in 4.1 seconds with a top speed of 186 mph. Not that anyone seriously interested in this car cares, but fuel economy is improved by 30% to what should be around 15/24-mpg city/highway.

There is only one transmission: the AMG Speedshift seven speed automatic with a start-up clutch to replace the torque converter. This set up is adjustable with four different configurations: controlled efficiency (normal), sport, sport plus, and manual (managed via the paddles on the wheel).

The AMG sports suspension has electronically controlled damping and is adjustable to comfort or sport. Steering is speed-sensitive and adjusts variably with the suspension settings. Braking is provided by 15.3-inch discs with six piston calipers in the front and 14.2-inch discs with a single piston in the rear. Optional carbon ceramic discs with red calipers also are offered.

The Mercedes-Benz SL63 AMG will be introduced officially at the Geneva Motor Show in March. Expect pricing to start around $150,000. But, P.S., now that the SL63 has been introduced, rumor has it that the Mercedes may up the ante with an even more potent SL65 AMG. Hold onto your hats.

Tsingshan's Threat to Tesla: EV Maker Is In Battery Crosshairs
Tesla-Funded Research Reveals One of The Biggest Mysteries of EV Battery
END_OF_DOCUMENT_TOKEN_TO_BE_REPLACED