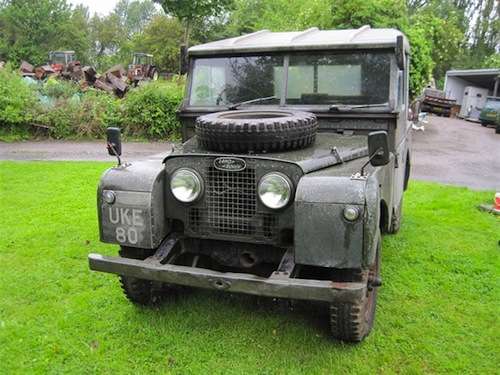 Winston Churchill's Land Rover to be auctioned off

The historic Series 1 Land Rover was given to Churchill on his 80th birthday in 1954.
Advertisement

It isn’t everyday that a vehicle once owned by one of the most revered political figures in history goes up for auction. A 1954 Series 1 Land Rover once owned by Sir Winston Churchill will be auctioned off in October by Cheffins Auction House. The unique vehicle was given to Churchill on his 80th birthday on November 30, 1954.

The chauffeur-driven Land Rover was specifically designed with the British Prime Minister in mind. The vehicle’s passenger seat was customized to fit Churchill’s rather large size, with an “extra wide” modification. Additionally, the Land Rover was outfitted with a foot well heater and truck cab.

The vehicle’s logbook indicates that it was originally registered as UKE 80 in the name of the “Rt Hon Sir Winston Spencer Churchill KG. OM. CH. MP. Chartwell, Westerham, Kent.”

Ownership was later transferred to Churchill’s son-in-law following the Prime Minister’s death in 1965. The Land Rover was then purchased by a farm equipment company in 1973 and used as a horse box transporter before it was designated to a shed in 1977. Since then, Churchill’s former vehicle has been showcased in charity events around the Kent area.

The 1954 Land Rover contains just 12,932 miles and is expected to fetch between $79,000 and $95,000, according to Cheffins.
The historic vehicle will be auctioned on October 20 at Sutton Saleground in Cambridge.

A British Conservative politician and statesman, Churchill is primarily remembered for his leadership of the U.K. during World War II. He served as Prime Minister on two separate occasions (1940-45 and 1951-55). Aside from serving as Prime Minister, Churchill was also a noted historian, artist, and writer. In fact, Churchill earned a Nobel Prize in Literature in 1953.

Tesla Contemplates A New Strategy for China Retail even As Sales Boom
Jay Leno on Elon Musk & EVs: “I Think He Should Get ... Credit"
END_OF_DOCUMENT_TOKEN_TO_BE_REPLACED