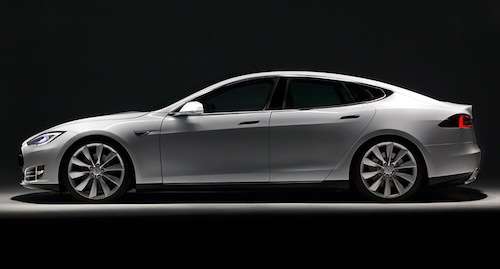 The highly touted Model S was the only automobile included on TIME's list, which features the 25 most significant inventions of the past year.
Advertisement

The magazine included the following excerpt about the Model S:

“The electric four-door sedan has the lines of a Jaguar, the ability to zip for 265 miles (426 km) on one charge – that’s the equivalent of 89 m.p.g. (2.6 L/100 km) – and touchscreen controls for everything from GPS navigation to adjusting the suspension. Tesla is building a network of supercharger stations – six are open so far – so owners aren’t tethered to their home port.”

Rather than a 1 through 25 ranking, TIME’s list is grouped into different sections based on price. The Model S was included in the list’s “$22,000 to $750,00” section, and is the only automobile to make the list. TIME’s list included everything from a product called LiquiGlide, which retails for $0.25, to the $2.5 billion Curiosity Rover from NASA.

Aside from the aforementioned accolades, the Green Car Journal named the Tesla Model S one of the five finalists for the 2012 Green Car Vision Award. The Model S was bested by the Ford C-Max Energi plug-in hybrid.

TIME previously included Tesla CEO Elon Musk in its “TIME 100,” which names the people that have the most impact on the world. Musk was included in TIME’s “Thinkers” portion for his work with Tesla Motors, NASA, green pioneer Solar City, and as the founder of the money transfer website PayPal.

Introduced in 2012, the Tesla Model S is a full-sized electric sedan that touts a 85 kWh lithium-ion battery and an EPA rated electric range of 265 miles. The Model S is also available in a base model with a 40 kWh battery pack, which features a starting price of $57,400 before government incentives.

In addition to the Model S, Tesla Motors is also currently developing the Model X, a full-sized battery electric crossover sport utility vehicle. The prototype was unveiled earlier this year at Tesla’s design studio in Los Angeles and was shown at the Geneva Motor Show in March. The upcoming electric SUV is set to go into production in 2013 and will likely reach consumers in 2014.