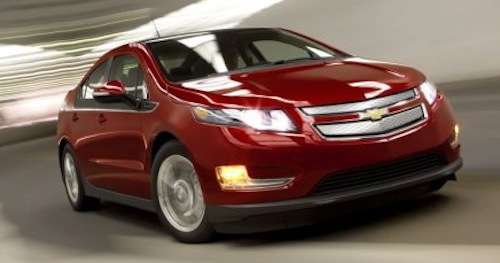 Leaked documents indicate that Chevy will ditch the Volt's current 1.4-liter engine in favor of a 2.0-liter turbo engine in 2014.
Advertisement

Consumers seeking more power than the Chevrolet Volt’s current 1.4-liter 4-cylinder engine may be in luck, because leaked documents indicate that an all-new 2.0-liter turbo engine may be available on the 2014 model, according to InsideEVs. The news surfaces just three days after Chevy released the details of the 2013 Volt model.

Chevy Volt’s current 1.4-liter engine and electric drivetrain produces just 149 hp and 273 lb-ft of torque. If the leaked rumors are true, customers could see considerable increases in performance. In fact, the 2.0-liter engine could produce up to as much twice the power of the 2012 Volt’s engine. Despite the engine upgrade, many Volt customers will likely be attracted to the EV’s fuel economy rather than it’s engine power. With that said, eco-friendly drivers in search of a livelier engine should be pleased.

Aside from a new turbo engine, recent news hinted at what enhancement can be expected on the 2013 Volt. First off, the 2013 model will feature a larger battery, which will offer a 38-mile range, up 3 miles from the 2012 Volt. The upcoming 2013 Chevy Volt also boasts an MPGe of 98, compared to the current 94 MPGe. Although it's a slight upgrade, the increased fuel economy may give the Volt the edge it needs to compete with the upcoming 2013 Honda Fit EV and 2013 Tesla Model S. The 2013 model will also contain an optional rear arm rest, redesigned rear hatch door and roof panels, a realtime energy use dashboard display and an additional two optional paint colors.

As for the current 2012 Chevy Volt, it presently ranks 8 out of 19 on U.S. News Rankings and Reviews list of Upscale Midsize Cars. It earned an overall 8.5 out of 10 score based on 28 published reviews and test-drives, according to U.S. News. Although the Volt ranked toward the middle of the pack, reviewers indicate that it is “one of the best hybrid cars on the market.” Unlike the typical all-electric car, the Volt earned major praise for its gas engine that kicks in when battery life dies. Additionally, reviewers stated that the Volt’s drive quality was “smooth and quiet.”

In spite of the acclaim, the 2012 Volt’s overall score suffered due to its expensive price tag. “It’s expensive compared with other hybrid cars and even most upscale midsize cars,” said U.S. News. Other than price, minor flaws included small trunk space, confusing tech features and limited passenger space.

Stay tuned for more information regarding the 2014 Chevy Volt's engine upgrade in the upcoming days and weeks.

Aaron Turpen wrote on June 12, 2012 - 12:09am Permalink
Given that the only time the engine ever engages the drive train directly is at highway speeds, I doubt this bigger engine will do anything but lower fuel economy. Chevy is probably just hoping to make it cheaper by consolidating engine tech since the little 1.4L currently being used is not in many other cars made in the U.S. (none that I know of, actually).
Ben_G wrote on June 12, 2012 - 11:34am Permalink
Aaron, the 1.4L Turbo is in also used the Chevy Cruze Eco.
Ben_G wrote on June 12, 2012 - 11:38am Permalink
@Aaron: The 1.4L Turbo is the same engine used in the Chevy Cruze Eco model.
Anonymous wrote on June 12, 2012 - 12:02pm Permalink
The current 1.4 L engine is integrated with a turbo charger and is the default engine in most trims for the the Chevy Cruze and Sonic. It's also used by GM overseas.
Aaron Turpen wrote on June 12, 2012 - 12:22pm Permalink
I knew it was being used overseas, but wasn't sure about U.S. models. If it's in most of the Cruze and all of the Sonics being sold, then the engine is being produced in high numbers. This makes changing the Volt's engine to a 2.0L have even less sense.
scottf200 wrote on June 12, 2012 - 2:02pm Permalink
Good post from T from the corresponding GM-VOLT.com thread. "I think people are missing the use of this engine in a volt configuration. Theoretically, yes, this engine can produce 270hp, but it is not peak hp that will be used in a Volt configuration. Here, the engine will operate around peak torque levels and that occurs at a very low (260ft-lbs @1500rpm) compared to the 4000rpm required to produce the 93 ft-lbs in the current, naturally aspirated 1.4l volt engine (I understand the volt engine operates in a range of RPMS). At those RPMs (1500rpm and 4000rpm, respectively) and for virtually equivalent power (260*1500 vs 93*4000), I believe that the 2.0l turbo will be 15% more fuel efficient than the NA engine (I calculated the peak airflow for each engine at those rpms and then calculated the hypothetical fuel use based on the air/fuel ratio). Needless to say, I presume everyone here would be happy with a CS mode fuel efficiency of EPA 42.5mpg (EPA 37 mpg *1.15= 42.5mpg @ 1500rpm). [I am being very conservative with calculations too]."
masterofnone wrote on June 13, 2012 - 10:51am Permalink
The question is, what configuration would be needed to achieve 50mpg in charge sustaining mode? Is it an atkins cycle engine? Maybe it isn't possible. My only complaint about the volt is the fuel economy of CS mode even though it doesn't happen very often.
scottf200 wrote on June 13, 2012 - 11:14am Permalink
I ask since when is 40 highway MPGs bad?!? Beats most cars on the road. What % of cars get 40 MPG highway out there? The Volt gets 40 MPG by many many real world drivers including myself. Including electric miles the "MPGused" is even higher. Last weekend my trip was 140 miles and I got 60 "MPGused" on the way home @ 65 MPH. Hotel let me charge overnight on the 120v outdoor plug.
masterofnone wrote on June 16, 2012 - 11:40am Permalink
We drove ours on a 1200 mile trip. Averaged 35 in CS mode. We have averaged 177 mpg over 11,000 miles so it is far better than any other vehicle. But we were well over 200 mpg before taking the 1100 mile trip. I probably will never use it on a long trip again unless there are no other options. I just hate to see my lifetime mileage brought down so quickly. If you only owned one vehicle or didn't want to rent a vehicle, using the Volt on long trips is certainly a fine thing to do. It is very comfortable and capable for long trips.