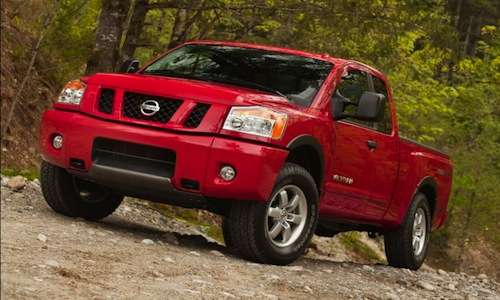 Nissan is recalling 26,626 model year 2012 Titan and Armada vehicles, manufactured from August 12, 2011 through March 13, 2012. The affected vehicles contain an improper part 567 certification label, which is supposed to contain the vehicle’s rim size details. A faulty certification label put the Armada and Titan at odds with Federal Motor Vehicle Safety Standard number 110. Additionally, a rim size omission may lead to an incorrect tire/wheel combination, which may increase the chance of a crash according to the National Highway Traffic Safety Administration.

On May 14, 2012 Nissan will begin supplying Armada and Titan owners with new labels and instructions on how to install the label. Customers who do not with to install the label may take their vehicle to a Nissan dealer to have the label installed free of charge. Nissan owners who wish to find out more information before May 14 may contact Nissan Customer Service at 1-615-725-1000. Concerned customers may also contact the NHTSA at 1-888-327-4236 or online at www.safercar.gov.

The news is just another in a long line of recalls in 2012 for Nissan. Just last month the automaker issued a recall of 2011-2012 Quest minivans due to faulty software associated with the fuel pump control module. Nissan has also issued multiple safety recalls on its Versa model this year for a shifter defect and airbag problems. Nissan’s airbag recall also affected its Altima model. Lastly, the Nissan Juke was recalled back in February for fuel leakage issues.

Recalls notwithstanding, the 2012 Armada and Titan have not fared well overall according to U.S. News. The 2012 Nissan Armada ranks dead last in U.S. News’ list of Affordable Large SUVs with a comprehensive rating of 6.7. Although the Armada earned points for its cargo space and towing capacity, it suffered in terms of its power and acceleration. Furthermore, reviewers felt that the Armada’s interior was “cheap-feeling” and that controls were puzzling. Lastly, the Armada’s fuel economy was worst on U.S. News’ list.

Not to be outdone, the 2012 Nissan Titan also finished last in its class on U.S. News’ list of Full Size Pickups. The 2012 Titan received an overall score of 7.2 based on 75 published reviews and test drives. Reviews indicate that the Titan is suitable for casual pickup drivers, but cannot compete with its competitors in every major category. Not only does the Titan have one of the smallest towing capabilities in its class, its offers poor fuel economy, cheap interior and features, poor build quality and a high price.

Toyota's First EV Will Have a Name of BZ: Toyota BZ
First Videos From Inside The Boring Company's Las Vegas Loop
END_OF_DOCUMENT_TOKEN_TO_BE_REPLACED