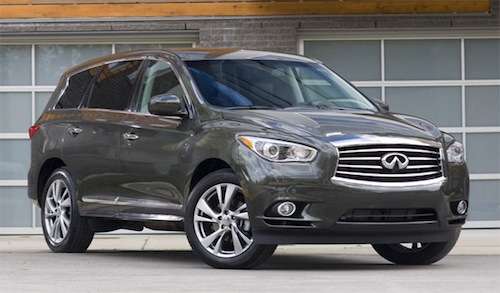 The Japanese automaker is recalling nearly 8,000 JX35 crossover vehicles due to a fuel gauge defect, which causes the inaccurate fuel readings.
Advertisement

Nissan North America has announced the recall of 7,842 model year 2013 Infiniti JX35 crossover vehicles due to fuel gauge concerns. The recall notice states that certain JX35 SUVs, manufactured from February 15, 2012 through June 22, 2012, may contain misrouted fuel transfer tubes inside of the fuel tank. Consequently, the fuel gauge might display inaccurate readings, because the fuel level float may be prevented from dropping when fuel is consumed. Not surprisingly, affected vehicles may unexpectedly run out of gas due to an incorrect fuel gauge reading, says the National Highway Traffic Safety Administration. Such an event may cause the JX35 to stall and/or crash.

The NHTSA reports that it has received one field report of a JX35 running out of fuel when the fuel gauge indicated that there was still fuel remaining. That said, there have been no crashes and/or injuries associated with the recall, according to the NHTSA.

The recall comes just one month after the NHTSA opened a probe into possible brake defects pertaining to the JX35. There are currently 8,000 JX35 SUVs being investigated, but a recall has not been issued.

If Nissan’s fuel gauge recall sounds familiar, it is because the automaker recalled just over 8,000 model year 2003 and 2004 Infiniti M45 sedans due to a nearly identical problem in March. The only difference is that the M45’s fuel gauge inaccuracy was the result of a circuit board error. Unlike the JX35 recall, there were 43 complaints of wrong reading associated with the March recall. In fact, 26 drivers reported running out of fuel due to the defect.