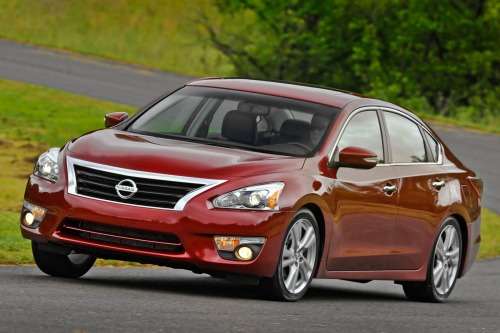 Nissan has slashed prices on seven of its best-selling models in the U.S., including the 2013 Nissan Altima.
Advertisement

In an attempt to have its cars and trucks show up in more Internet searches, Nissan is cutting prices on seven of its 18 model year 2013 vehicles in the U.S.

The price drops vary by model, but range from 2.7 percent, or $580, on the Nissan Altima midsize car to 10.7 percent, or $4,400, in the Nissan Armada SUV. The two popular models currently start at $22,550 and $42,285, including destination, respectively. Nissan will also lower the price tag of the Sentra, Juke, Murano, Rogue and Maxima.

So what accounts for the discount? According to Nissan, the sticker prices on the seven models were higher than similar models from competitors, which kept Nissan out of certain Internet searches by consumers. The price drop should help the vehicles perform better when searched online, including appearing at a higher frequency and favorability compared to its competitors. The seven models presently account for 65 percent of Nissan sales in the U.S.

The price slashing is necessary to keep Nissan in line with its goal of taking 10 percent of the U.S. market by 2016, a figure set by Nissan-Renault CEO Carlos Ghosn. The automaker’s share of the U.S. market in the first quarter of this year was 8.6 percent.

Starting May 3, the cuts will stay in effect indefinitely. The cuts only impact vehicles that aren’t yet on dealer lots. That said, Nissan will allow dealers to trim prices of cars currently in their inventories.

Nissan hopes that the price reductions will build upon strong April sales, which saw a 24 percent increase in sales volume. Nissan ranked fifth in April out of all automakers in sales volume, with 80,003 vehicles sold. Ford, Chevrolet, Toyota and Honda all outsold Nissan.

Although consumers will enjoy lower sticker prices, Nissan plans to offset the cuts by reducing rebates and other discounts. Nissan has not announced when it will begin cutting back incentive programs.

General Motors adopted a similar price cut plan earlier this year, reducing the sticker price of the Chevrolet Malibu by $300 to $770.

Nissan made headlines earlier this year when it recalled five of its 2013 models due to dangerous passenger airbag defect. According to National Highway Traffic Safety Administration documents, an unspecified amount of Nissan Altima, LEAF, Pathfinder, Sentra and Infiniti JX35 vehicles may be equipped with improperly manufactured passenger Occupant Detection System (ODS). As a result, the ODS unit may malfunction, causing it not to deploy in the event of a crash. Click here to read Torque News’ coverage of Nissan’s March 2013 airbag recall.