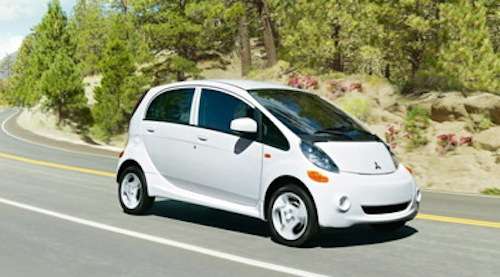 The safety recall affects over 300 vehicles in the U.S. and Canada.
Advertisement

Mitsubishi has announced the recall of more than 300 model year 2012 i-MiEV electric vehicles in North America. The recall affects 261 cars in the U.S. and 49 in Canada. According to the recall, select i-MiEVs manufactured from November 4, 2011, and December 22, 2011 may experience air bag deployment problems. Specifically, incompatibility between the self-diagnostic software and the air bag sensor may deactivate the frontal and side air bag system. As a result, airbags may not deploy in the event of a crash, increasing risk of vehicle occupant injury.

Owners of affected i-MiEV models will receive a new air bag sensor, free of charge. Mitsubishi has not disclosed when it will begin notifying customers of the recall. In the meantime, concerned customers may contact Mitsubishi at 1-800-222-0037. I-MiEV owners may also contact the National Highway Traffic Safety Administration, which is handling the recall, at 1-888-327-4236 or go to www.safercar.gov. The NHTSA Campaign ID Number is 12V372000.

Back in June, Consumer Reports took Mitsubishi to task stating that the i-MiEV was a “crude and uncomfortable” vehicle, which causes “range anxiety.” According to Consumer Reports, owners of the EV may experience “range anxiety” due to the fact that it averages varying miles per charge on different occasions.

The Mitsubishi i-MiEV first hit U.S. dealerships in December 2011. Although Mitsubishi originally announced a base price of $27,990, the vehicle’s price tag was raised to $29,125, plus destination charge, shortly before it was released. The U.S. version of the i-MiEV was revealed at the 2010 Los Angeles Auto Show. The vehicle was also made available to the Canadian public in December 2011. The Canadian retail price starts at CAD 32,998 ($33,891). The i-MiEV has sold just 149 units as of June 2012. Both the American and Canadian prices do not include any government tax incentives.

Stay tuned for more information regarding Mitsubishi’s recall schedule, which should be released shortly.