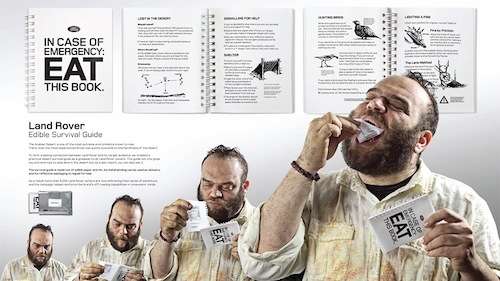 The British automaker has just released the details on its new edible survival guide, which is geared toward the Middle Eastern market.
Advertisement

Are you an adventurous driver who enjoys off-roading in the dessert? Although this probably doesn’t apply to the majority of everyday drivers, Land Rover has come up with an intriguing gimmick aimed as those who do enjoy daring pursuits. The automaker has just created a survival guide for its customers in the United Arab Emirates. This handy survival guide will ensure that Land Rover’s dessert bound drivers are equipped with basic survival tips for finding food, water, shelter and more. Perhaps you are not the hunting type; there’s no need to fret. Land Rover’s survival guide is edible. The book’s front cover, ink included is safe to eat. Ad Age reports that the cover page has the nutritional equivalence of a cheeseburger. Just be sure not to eat anything but the cover. Furthermore, the book is wrapped in a reflective package, making it useful in signaling for help.

A more in-depth look inside showcases an abundance of survival knowledge, starting with the “Lost in the Desert” section. If you find yourself lost in the desert the first thing to do is establish the likelihood that someone will find you. If this prospect seems unlikely, then it is time to move. First, it is a good idea to properly orient oneself. Clearly, the sun rises in the east and sets in the west. So if you’re facing west, north is to your right. Once your situated head for the coast. Land Rover’s survival guide states that most Middle Eastern cities are located on the coastline.

If you’ve chosen to stay where you are, it is a good idea to find help, which is detailed in the “Signaling for Help” segment. The best way to do this is to build a stress signal with three fires in a V shape. As was previously stated, the guide comes in a reflective package, which would be beneficial for signaling. Individuals that opt for staying put will also have to consider shelter. With that in mind, Land Rover has included a step-by-step process showcasing how to construct shelter out of cloth, wood and branches.

As for food, the guide outlines hunt birds, which are a good source of protein. Don’t bother trying to capture a bird in flight, unless you are an experienced hunter. More often than not, you will be more successful capturing a bird while it is on the ground. If you’re lucky enough to catch your prey, the survival guide also illustrates how to prepare it.

Lastly, Land Rover’s survival guide teaches customers how to start and maintain a fire. Drivers are taught both the “Fire by Friction” and “Lens” methods. Both techniques are useful, unless you have a lighter of course.