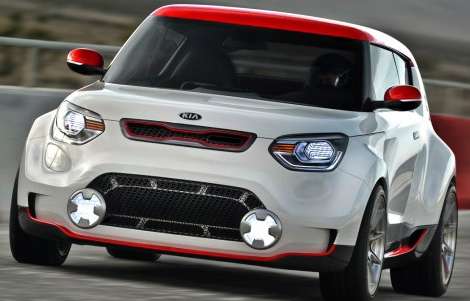 Although Kia already boasts one of the most popular small-car designs on the market, the South Korean manufacturer is attempting to outdo themselves with the Kia Track’ster. Kia unveiled their new Track’ster Concept on Wednesday, February 8 at the 2012 Chicago Auto Show. Utilizing the basic design of the Kia Soul, the Track’ster aims to improve upon the occasionally-criticized drivability of the Soul.

While the Soul is not exactly known for its performance, the Track’ster Concept should offer a much-needed improvement. The newly unveiled concept car features a turbocharged 250 horsepower 2.0-liter four-cylinder engine, a short-throw six-speed manual transmission, an electronically controlled four-wheel-drive system and lowered sport suspension system for increased performance. The Track’ster’s 250-hp engine is a 60 percent improvement over the Soul.

Performance aside, the Track’ster also touts numerous aesthetic improvements. Like the Soul, the Track’ster features an angled roof, but is noticeable different due to its two-door design. The Track’ster’s two doors have been lengthened and equipped with racing-inspired billet push-style handles. The vehicle’s side valances are accented in Inferno Orange and contain working rear-brake cooling ducts. Dimension wise, the Track’ster is 75.5-inches in width, which is five inches wider than the Soul.

"The idea was to make the Track'ster tough looking, like a bulldog," said Tom Kearns, chief designer for KMA. "But the car had to be approachable as well. We wanted to base the car in reality so people instantly knew it was a Soul, but with a lot of attitude.”

Keeping in line with the Trackster’s hard-hitting exterior, it features monoblock billet performance wheels, designed by Kia’s California design team and HRE. The car’s wheelbase is 101.2 inches, an inch longer than the Soul. Specifically, the Track’ster is equipped with 19-inch Michelin Pilot Sport PS2 high-performance tires.

The inside of the vehicle is just as impressive as its exterior, furnished with Inferno Orange suede-covered racing seats and Granite Gray leather on the steering wheel and door panels. Highlighted with red-glowing lights, the Track’sters instrument panel is large and easily readable. Track’ster also sports a large touch-screen panel located above the engine Start/Stop push-button, containing GPS navigation, entertainment layout and HVAC controls.

Looking beyond the Track’ster’s front seat, drivers will find a unique rear design in which the rear seats have been removed. A fully integrated equipment tray and spare-tire well take the place of the traditional rear seating area.

"We saw the Track'ster as a performance-inspired concept that could spend time on the road and racetrack," said Kearns. "The idea was to make the tools and equipment necessary to keep the car performing in top condition easily accessible."

Although racing enthusiasts may be salivating at the thought of purchasing the Track’ster Concept, it is as its name implies, only a concept. That is not to say that the Track'ster will never be available, but at the moment Kia does not plan on manufacturing it.

Stay tuned for more information about the Track’ster as the 2012 Chicago Auto Show continues.