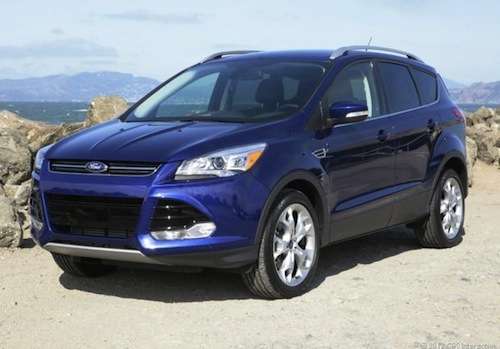 Ford announces fix for Escape and Fusion fire problem, what's next for customers?

Although the automaker did not have repair plans in place for customers when it recalled 90,000 Ford Escape and Fusion vehicles two weeks ago, it has now found a fix to its dangerous fire-related flaw.
Advertisement

Ford Motor Co. announced today that it has found a fix for the recent fire risk, which led to the recall of 90,000 model-year 2013 Ford Escape SUVs and Ford Fusion sedans. As we first reported two weeks ago, the automaker announced the recall due to an engine-overheating problem, but did not have any repair plans in place for customers. After much examination, including launching a fire investigation task force, Ford has determined that cooling system software upgrades will solve the defect, according to Rau Nair, Ford group vice president for global product development.

Ford reports that the original cooling system design found in the Escape and Fusion was unable to address the loss of coolant system pressure – a major factor in the engine-overheating flaw. Aside from a software upgrade, select vehicles may require part replacement, said the automaker. The fire-related defect has contributed to 13 vehicle fires, 12 of which have affected the 2013 Ford Escape.

Customers can expect to receive their software update beginning next week. Ford estimates that the repair will take less than one-half day, but may take longer due to service scheduling requirements. In the meantime, Ford Escape and Fusion customers may contact Ford at 866-436-7332 or visit www.ford.com to find out further recall information. Drivers may also contact the National Highway Traffic Safety Administration’s Vehicle Safety Hotline at 1-888-327-4236.

Aside from the Nov. 30 recall, which concerns 73,320 Escapes and 15,833 Fusions, the automaker has issued several other fire-related recalls this year. In July, Ford recalled 11,500 model-year 2013 Ford Escape SUVs equipped with 1.6-liter engines due to fire dangers. While the most recent recall concerns engine overheating, the cause of July’s recall was a damaged fuel line assembly. As of Monday, more than 90 percent of the vehicles affected by the recall have been repaired.

In September, Ford issued the recall of an additional 6,146 model-year 2013 Ford Escape SUVs over fire concerns. This time around, a cylinder head cup defect was found culpable for the flaw. According to the NHTSA, the vehicle’s cylinder cup may become dislodged, causing a significant amount of coolant loss. Not surprisingly, such an occurrence may cause an engine compartment fire when the coolant is combined with a hot engine.

The 2013 Escape was also recalled over a brake defect in July. The recall, which involved over 10,000 SUVs, was issued due to improper brake pedal clearance resulting from improperly positioned carpet padding.

In addition to the Escape’s four recalls, the 2013 Ford Fusion was recalled for a second time just last week for headlamp failure. The recall affects 19,106 Fusion sedans in the United States and another 1,098 in Canada.