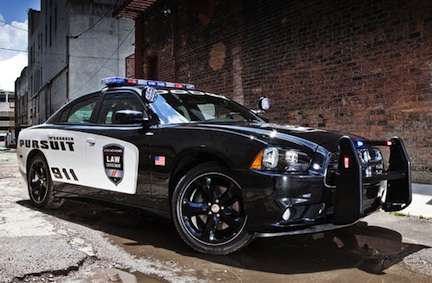 The National Highway Traffic Safety Administration has announced that Chrysler will recall 9,688 police model Dodge Chargers from models years 2011-2012, due to multiple electrical problems. The cruisers may suffer from an overheating light harness, which can cause low beam lights to fail, as well as failed anti-lock brakes and stability control systems due to an overheated power distributer.

Chrysler began investigating the problem in August of last year after there were two reports of low-beam light failure and melted connectors. There was also a report in December that a Michigan State Police training vehicle experienced repeated loss of the ABS/ESC systems. In total, Chrysler stated that it is aware of 25 headlamp failures and 34 ABS/ESC defects on police vehicles. The automaker also indicated that no injuries have been reported with regard to the recall. Chrysler will be delaying shipments from its Brampton Assembly Plant during the investigation.

The NHTSA reports that these potential failures could lead to “loss of visibility and/or braking ability, increasing the risk of a crash.” Chrysler will notify owners of the defect and will replace the headlamp jumper harness, as well fix the ABS/ECS system, free of charge. The recall is expected to being in March. Charger owners can contact Chrysler at 1-800-853-1403. Owners may also contact the NHTSA at 1-888-327-4236 or online at www.safercar.gov. The recall number is M01.

Considered the “highest performance police car in America,” the 2012 Charger police car recently posted the fastest ever lap time recorded (1:33.70) at the Michigan State Police annual evaluation in Belding, Michigan. The standard 2012 model comes with a V6 engine capable of producing 292-horsepower. There is also an upgraded V8 model available, capable of reaching a top speed of 151 mph.

Although not confirmed, the low-beam failure may be the result of one of the new factory-installed police-equipment packages designed for the 2012 Charger. The Charger’s new Wire Harness option, can cause low-beam failure if overheated, because it controls the vehicle’s lighting system. Also available on the 2012 model is redesigned Power Distribution Center, which if overheated may contribute to ABS/ESC malfunctioning.

Despite the recall, Chrysler has been proactive in regard to notifying the NHTSA and investigating customer claims. By federal law, an automaker must notify the NHTSA of potential defects within 5 days, which it appears Chrysler has done. Readers may recall that we reported earlier this week that BMW had been fined $3 million for not notifying the government of potential issues within a timely manner.

stanley lesa wrote on June 8, 2017 - 7:23am Permalink
I am looking for a good second hand Police Dodge to buy at reasonable price. I am based in Zambia and run a private security company. We are in VIP protection, Static Guarding and Escorts. Grateful if I can be assisted in that direction.