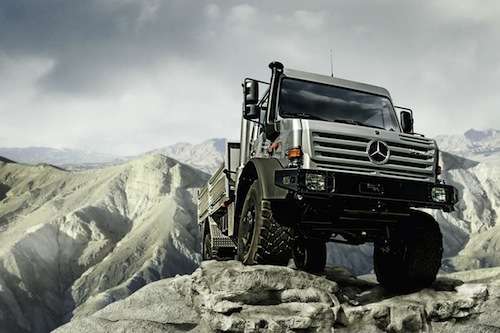 Described as the ultimate all-terrain vehicle, the Unimog has been designed to fight forest fires, perform rescue operations and perform military-related duties.
Advertisement

Arnold Schwarzenegger has just bought a massive military vehicle that would have fit perfectly in his new film The Expendables 2. The former California governor is celebrating his long-awaited return to acting by purchasing a $250,000 Mercedes-Benz Unimog U1300, a multipurpose monster truck. The Terminator star unveiled his new ride on Thursday while driving around Santa Monica.

Schwarzenegger’s new Unimog is just the latest in the actor’s growing collecting of Mercedes-Benz vehicles. The action star is also the proud owner of a classic Mercedes Excalibur and a Mercedes-Benz SL-Class convertible.

So how does a military grade vehicle handle the roads of Santa Monica? Well, Schwarzenegger’s Unimog had to be specifically modified by Mertec, a German company, to properly handle L.A. terrain. Although Schwarzenegger purchased his new Unimog for cruising beachfront cities, it is actually the choice army vehicle for many countries including the United States, Britain and Germany.

Aside from military endeavors, the Unimog is suitable for a number of highly demanding jobs. According to Mercedes-Benz, the Unimog “has been designed as the ultimate vehicle solution for an almost endless range of tasks,” including energy, road rail, airports, winter service, mowing, fire and rescue, haulage, construction, agriculture and arboriculture, highways, and water and drainage.

No stranger to military vehicles, Schwarzenegger is well-known for his large collection of Humvee vehicles. Schwarzenegger first became interested in Humvees while in Oregon during the filming of Kindergarten Cop in 1990. Schwarzenegger reportedly saw a fleet of Army Humvees driving along the highway and was instantly hooked.

Unfortunately for Schwarzenegger, there was no civilian issue Humvee available in 1990. The actor then began insisting that a civilian Humvee be manufactured. Schwarzenegger’s prayers were answered two years later when AM General released the first Hummer, which was a civilian version of the M998 Humvee.

At one time, Schwarzenegger owned a total of eight Hummers. Schwarzenegger sold his fleet in 2006 in an effort to fulfill his campaign promise to reduce greenhouse emissions in California. The actor did keep one Hummer, however, which he converted into an environmentally friendly hybrid vehicle.

Action fans can check out Schwarzenegger in The Expendables 2, which is now playing. Look for Schwarzenegger’s comical encounter with a Smart car.

Jimson wrote on October 9, 2012 - 12:20am Permalink
He’s probably most famous for his movie roles in Terminator, being a professional bodybuilder and becoming a California governor. But now 65-year-old Arnold Schwarzenegger has given himself the ultimate gift – a $250,000 monster truck. Arnie was spotted driving around Santa Monica yesterday (Thursday) as onlookers were forced to bite the dust.